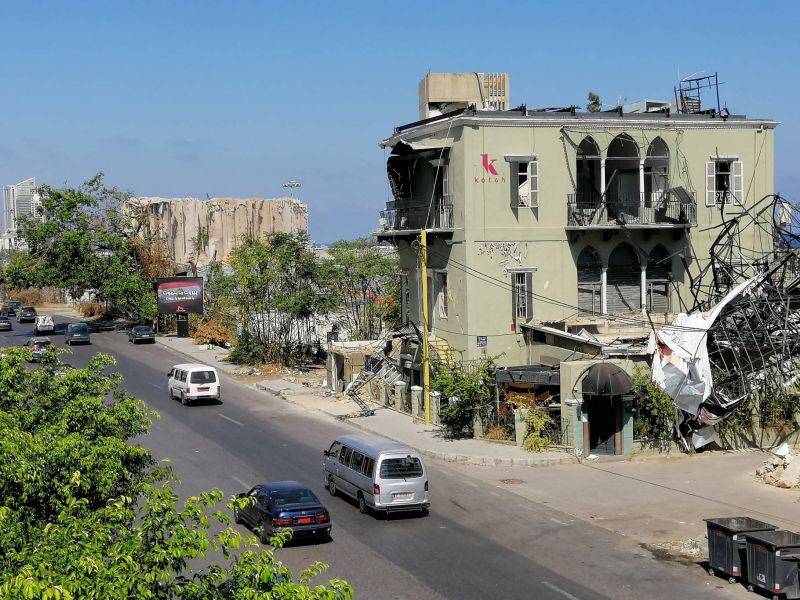 In a context similar to that of the aftermath of the Civil War, and while the people of Beirut and its suburbs are still traumatized from the loss of their houses, shops, neighborhoods and relatives, residents might find hope in the several proposals to rebuild the port of Beirut that have started to flow in the last weeks.

Amongst the many international actors that have already expressed some interest in this reconstruction process — from private firms, such as the French shipping giant CMA-CGM (lead by the Lebanese-born Rodolphe Saadé), to governments, such as China or Russia — the most known proposal to date is the multi-billion dollar project submitted to the Lebanese authorities — and unveiled in a press conference on April 9 — by four German companies (Hamburg Port Consulting, Colliers International, Fraunhofer Institute and Roland Berger) to rebuild and develop the Beirut port and its surrounding areas.

The plan, as presented, aims to design a high-end port that would restore Beirut’s historical geographic location as a gateway to other Lebanese regions. This will entail moving the port to the east, with the storage area being transferred to the land on the eastern side of the Beirut River, which is currently occupied by the waste landfill in Burj Hammoud, and the main port’s access point will be moved from the city center to the industrial area bordering the Beirut River. The plan also includes the construction of high-rise buildings with a touristic function and a number of skyscrapers overlooking the sea. As its promoters explained, the money invested in these facilities will be used to finance various public infrastructure projects, such as a central park, sports facilities, nurseries, schools and an affordable housing complex for families.

But what the proposed project carries with it — and what may be proposed through similar projects in fact — has a major impact on the affected neighborhoods and the city as a whole. To avoid a greater abuse of people’s rights than what already happened since the explosion, we thus need to ask the appropriate questions and address the priorities of the displaced and affected populations in assessing any of these rebuilding projects.

Learning from the past

One of the main criticisms that can be raised about the German project is that it is recommitting the mistake of “Solidere” in terms of projecting architectural perceptions on the existing social urban fabric, without taking into account the characteristics of the surrounding areas, existing social and economic conditions, or existing policies.

Furthermore, this project is, in fact, a business model that is privately owned and internationally controlled. While aiming to marginalize the major local developers, it does not propose a different model from what they themselves have done so far, but rather relies in its approach on European real estate development projects, parachuting them into the local context.

The proposal also does not mention the beneficiaries: we do not know who will attend these schools, who will frequent these parks and who will live in the housing complex. We also do not know what the relationship of the proposed public programs to the surrounding environment is, and what the role of public authorities is, in the sense that the state’s role is not mentioned in any part of the project.

In fact, looking back at previous reconstruction experiences that have been implemented since the Civil War — from the Solidere project to the ones related to the consequences of the 2006 war — can guide us to ask the right questions, as all of these top-down projects failed to provide the appropriate conditions for the return of the residents or for real recovery despite applying different models. For example, in the mid-1970s, around 130,000 people were making their living from working in downtown Beirut. The Solidere experiment and the law establishing the real estate company morphed the concept of public benefit into something that can be easily manipulated and redefined according to private interests. This increased social segregation and separated the center from the rest of the city by reinforcing what the war had left behind.

Therefore, and beyond discussing any proposal, such as the German one, per se, we have to discuss the framework in which any reconstruction project should take place. And before we begin to delegate bits and pieces of the affected areas or give them to foreign donors, investors and architects, there is a local decision that must be made about which reconstruction policy we want.

Perhaps the “Protection of the Damaged Areas and Support of Reconstruction” law issued in October 2020 is the most prominent evidence of the importance of having a discussion around the framework and the policy of any reconstruction initiative. As we have already explained in detail in these columns, the law adopted an approach devoid of economic and social aspects and which reduces urbanization to buildings and real estate. As a result, it did not enable residents to quickly restore their damaged buildings and it didn’t clarify the path for compensation payments, nor did it provide incentives, give priority to ensuring access to affordable housing, set a path to rehabilitate public space or establish policies that limit speculation.

These matters are political par excellence, not technical. Consequently, the process of rehabilitating and reviving the affected neighborhoods, from Karantina, Mar Mikhael and Gemmayzeh to Geitawi, will be a serious political struggle. Therefore, we urgently need to discuss the policy and framework of reconstruction, regardless of who will be charged with the development or funding. If the issued law does not establish a participatory and transparent framework, and does not establish a comprehensive, fair and sound policy for the recovery of the affected neighborhoods, and if international bodies such as German companies do not contribute to engaging people with a comprehensive inclusive vision, then perhaps we should seek to develop our alternative plan and try to impose it on all decision-makers — we as the community, the families of the victims and all the residents of the affected neighborhoods.

A rehabilitation process that would guarantee the rebuilding of the economy and the local communities and is not limited to buildings and infrastructure. A process that aims at supporting neighborhoods in their recovery, restoring daily life and enabling everyone to return as quickly as possible before it is too late. A process that puts the concerns and worries of residents at the center of its proposal. A process that aims at protecting the right to housing for all, protecting people from temporary and permanent displacement. A process that respects the environment and works to rehabilitate common and public spaces in a manner that makes them accessible to all. A process that guarantees equality between victims — by including different social groups without any discrimination — and fair compensation, and that clarifies payment mechanisms and distribution timetables.

Finally, it should seek to develop a public decentralized framework that ensures the voice of all the victims and residents of the affected areas in the planning, organizing, coordinating and implementing processes. And this can be made possible through the “Association of Residents of Neighborhoods Affected by the 4 August Explosion” which will soon be launched by a number of residents. Based on its commitment and awareness of the value of social solidarity and support in response to the Beirut port explosion, the association aims at realizing full justice for the affected neighborhoods and for any resident, business owner, craftsman\woman, artist or worker in these neighborhoods. The association aims to become a lobbying force that would pressure public and official institutions as well as international and unofficial ones, and to create a common space for the residents to work, advocate and support unified communal work, in order for us to access justice and the rights of the community.

We have witnessed and experienced the results of the “reconstruction” projects that have been implemented in the past. Today we are well aware of what the exclusion of the local communities means, and we consider any project or proposal that is not based on decentralized public frameworks and inclusive and sound pathways unable to achieve the justice that we aspire to, especially those submitted by actors who will most certainly benefit from the funding and implementation.

Public Works Studio is a research organization that engages with urban and public issues in Lebanon.

In a context similar to that of the aftermath of the Civil War, and while the people of Beirut and its suburbs are still traumatized from the loss of their houses, shops, neighborhoods and relatives, residents might find hope in the several proposals to rebuild the port of Beirut that have started to flow in the last weeks.Amongst the many international actors that have already expressed some...