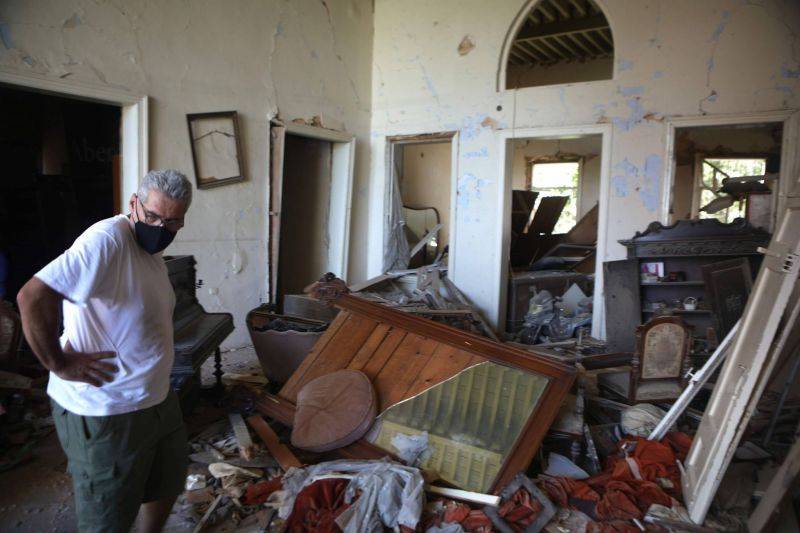 After the explosion, a man surveys the damage to his apartment in Mar Mikhael. (Credit: Patrick Baz/AFP)

Pictures and videos of areas devastated as a result of the Aug. 4 Beirut port explosion have permeated the media. Many of them may even become politicized, visual icons of what happened that afternoon.

Today, although TV stations have halted their live broadcasts from the destroyed areas, those neighborhoods continue to suffer — and will suffer for a long time to come — from the devastation, as well as the state’s policies and practices, and its inadequate response since the explosion.

Lebanon has already witnessed reconstruction projects, first characterized by external financing and the consolidation of power, and second, by an investment in the destruction to activate a network of interests associated with real estate speculation and the construction sector, in addition to strengthening the “clientelist” network of leaders and sects.

Previous reconstruction operations did not create the needed conditions for the return of residents. On the contrary, they led to massive displacement, thus generating a rupture between the past and present situation of the neighborhoods.

Today, in light of the above, and in light of all the discussions and initiatives taking place about the restoration and reconstruction of the neighborhoods affected by the Beirut port explosion, many questions arise about the dangers of the “Protection of the Damaged Areas and Support of Reconstruction” law issued in October 2020. Will the law actually protect residents from displacement and preserve the socio-economic fabric of neighborhoods as it is being promoted?

A lack of protection and people’s exclusion from decision-making

The law lacks any policy that benefits from the lessons of the past, and thus adopts an approach devoid of economic and social aspects, which consequently reduces planning to buildings and real estate. The law’s authors were satisfied with relying on the necessity to protect property rights and individual initiatives within the framework of the free economic system, while ignoring other constitutional rights and principles that are no less important, such as social justice, equality in the distribution of public expenses, the right to housing and the rights of disabled persons.

In parallel with setting controls on the transfer of ownership and annexation of lands, the law does not enable residents to quickly restore their damaged buildings, it doesn’t clarify the path for compensation payments, it does not set a path to rehabilitate public spaces, and it does not establish policies that limit speculation in the city as a whole.

Also absent from the law are aspects focused on the recovery of the most affected neighborhoods, specifically the right to access affordable housing in order to prevent the displacement of the neighborhoods’ old and new residents as a prelude to replacing them with higher income classes, in the context of what is known as gentrification. Furthermore, the law does not include any stimulus for the socio-economic recovery of the affected areas or any plan to revive public spaces. It also does not seek to engage rights-holders and motivate them to rebuild and restore their houses and shops.

In its first clause, the law provides for the establishment of a coordinating committee to survey damage, relief and compensation, but the components of this committee do not include any representation of rights-holders, the affected communities or the residents. Representing these groups would have fostered the necessary transparency and participation, especially after the collapse of society’s confidence in official paths following the Oct. 17 uprising and calls for a radical change of the ruling system.

The absence of the participation of those affected will inflate the power of decision-making circles that are limited to personal relations and favoritism, thus alienating the affected communities from the rehabilitation of their neighborhoods.

In general, the neighborhoods destroyed by the explosion are largely made up of old or historical buildings, the majority of which are rented. Rent is the primary means of accessing housing in the major cities in Lebanon. The percentage of renters in Beirut was 49.5 percent as of 2008, according to a survey conducted by the United Nations Development Program.

In Rmeil specifically, which is one of the most affected areas, low-income renters form 75 percent of the population, according to a 2012 study by the Lebanese University. This is related to the location of Armenia Street, which historically — since the 1920s — attracted workers and craftsmen, such as carpenters, shoemakers and others to live near their workplaces at the port, the railway, etc.

But starting in 2006, the neighborhood began to attract investors, and restaurants and bars came to replace old industries. As a result of this economic transformation, the ownership of much real estate in the area changed and apartment prices rose in Mar Mikhael, which led to the eviction of many residents.

Today, after the explosion, these residents are threatened, more than ever, with permanent displacement due to the fragility of their housing status and the legal framework that guides their presence in the city.

The aforementioned reconstruction law extends residential and non-residential lease contracts in damaged buildings and plots for a period of one year, but this means that residents are protected from eviction for only one year. This is an insufficient period of time due to the severe economic, financial and social crises Lebanese society is experiencing, and because of the time it may take to restore buildings, especially due to the uncertainty and the slow pace of compensation distribution. Beyond that, the law’s emphasis on the sanctity of private property and its connection to freedom of contracting is an obstacle to guaranteeing the right to housing.

As a result, and in the absence of housing protection, evictions are exacerbated in the areas affected by the explosion. According to our periodic Housing Monitor report, which tracked eviction cases received between Sept. 3 and Oct. 17, 2020, 58 cases of eviction threats affected 190 people in different neighborhoods of Beirut. The largest number — 30 cases, or about 52 percent of all threats — were in the areas affected by the explosion.

Unfortunately, there were not only threats of eviction; forced evictions were carried out in many cases. The residents are forced to bear this additional pressure after surviving the terrible explosion, which caused a range of physical, material and psychological damage.

Another survey we at Public Works conducted on a sample population in the residential neighborhood stretching between Armenia Street and Khazineyn Street found that about 42 percent of the apartments vacated due to the explosion are now permanently vacant, while 58 percent are classified as temporarily vacated, awaiting the completion of restoration.

These figures indicate a real risk that this rapid and temporary transition will turn into permanent displacement in the absence of responsible authorities, disaster management and transparency regarding the compensation mechanism. This displacement presents a serious threat to the recovery of a viable city and flourishing neighborhoods.

Amendments to guard against gentrification

In light of the increasing fragility of the residents’ living conditions in the affected neighborhoods, we propose a series of measures that we consider necessary to protect the community and the economic and urban fabric of these neighborhoods. These measures could have been introduced by the law with the aim of controlling and halting the depletion of these neighborhoods and even preventing gentrification from completely changing them.

First, with regard to ensuring the representation of the population, there is a need to form representative committees for rights-holders and affected communities to activate their role and restore their voice in the debate about their concerns and priorities.

Second, there is a need to ensure housing protection and the production of affordable housing. Given the percentage of evictions and threats that have been detected in the affected areas, it is imperative to determine the mechanism for implementing the extension of residential and non-residential lease contracts that protect against eviction, in addition to extending the contracts throughout the rehabilitation and restoration period.

In view of the increasing vacancy rate after the explosion, it is imperative to offer incentives for the renovation of empty units and vacant buildings to encourage their occupancy, in exchange for providing affordable housing or social spaces in the neighborhoods.

Third, the rehabilitation of the damaged buildings must be executed as soon as possible to curb real estate speculation and prevent the exploitation of their collapse by developers, in addition to dismissing the privileges of investors and corporate entities, and curtailing their ability to control prices.

Fourth, legal obstacles related to renovation permits should be removed by facilitating the process of obtaining permits for the restoration of damaged buildings, through giving tenants the right to obtain such permits. This should also be accompanied by speeding up the decision on permits by the municipality and the governor of Beirut, and speeding up the work of the Directorate-General of Antiquities in inspecting heritage buildings and assessing their status.

It is essential that the displacement of residents from their neighborhoods be curbed, and that waves of gentrification not be allowed to change the shape of the city and the relationship its residents have with it. Although the urban social fabric we have been losing needs time and effort to be rebuilt, it is possible to protect it through policies favoring marginalized residents and neighborhoods, rather than developers and corporate entities.

Public Works Studio is a multidisciplinary research and design institution that engages with urban and public issues in Lebanon.

Pictures and videos of areas devastated as a result of the Aug. 4 Beirut port explosion have permeated the media. Many of them may even become politicized, visual icons of what happened that afternoon.Today, although TV stations have halted their live broadcasts from the destroyed areas, those neighborhoods continue to suffer — and will suffer for a long time to come — from the devastation,...

Memory, violence and fear: Why Lokman Slim’s murder must not be depoliticized