90,000 Sinopharm vaccines will join a trend in inoculations distributed outside the national vaccination plan 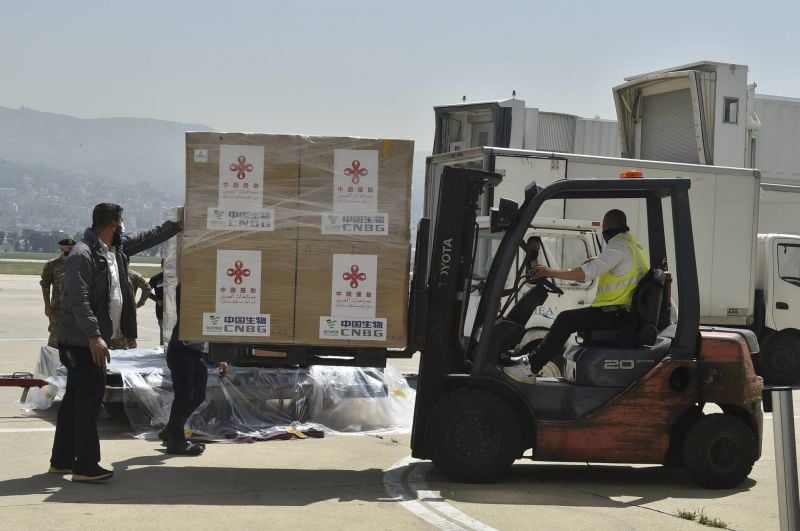 BEIRUT — Lebanon received a donation of 90,000 doses of the Chinese-made Sinopharm vaccine on Tuesday — its first donation of COVID-19 inoculations from a foreign state.

However, these vaccines are set to be administered outside a national vaccination plan that is currently prioritizing health care workers, residents older than 55 and those with pre-existing health conditions, caretaker Health Minister Hamad Hassan said during a television interview over the weekend.

The 90,000 doses, which arrived in Beirut on Tuesday morning, will be allocated according to two categories — 50,000 to the Health Ministry and 40,000 to the Lebanese Army.

Forty thousand doses of the ministry’s share are set to go to media workers, public sector employees and health insurance sector workers in a rollout that begins on Monday, Hassan said. The minister added that he was working with caretaker Information Minister Manal Abdel Samad to coordinate vaccines for journalists, editors and photographers, who were invited by their respective syndicates to register for the vaccine earlier this year.

The remaining 50,000 doses have been earmarked for the military, an army spokesperson told L’Orient Today — 10,000 from the Health Ministry’s share and 40,000 directly to the armed forces.

The Sinopharm vaccine is already being distributed in several countries, including the United Arab Emirates, Pakistan and China, but full results of efficacy trials have not been published. The vaccine’s UAE distributor has offered some people three doses, rather than the standard two, after finding their immune response was insufficient.

The company that developed the vaccine has said it is 79 percent effective. The World Health Organization said last week that the efficacy results were compatible with its requirements and that it hoped to issue recommendations on the vaccine by the end of April.

Outside the national plan

The provision of the Sinopharm vaccines marks only the latest example of vaccines being distributed to residents who fall outside the priority groups laid out by the Health Ministry.

The Health Ministry published an updated vaccination plan last week, laying out the priority groups for vaccination rollout and which vaccine each group will receive.

According to the plan, residents older than 65, health care workers and 55–64-year-olds with pre-existing health conditions will receive the Pfizer-BioNTech vaccine, while the AstraZeneca vaccine is being administered to 55–64-year-olds and public sector workers.

Once these groups are vaccinated, the next priority groups will include people with disabilities and 18–55-year-olds with health risks. The plan does not specify which vaccines will be used at later stages.

Ministry representatives could not be reached for comment about why the vaccination rollout is deviating from the priority groups.

So far, only 1.9 percent of Lebanon’s adult population has been fully vaccinated against COVID-19, according to the Health Ministry’s latest figures. The ministry has attributed this slow rollout to a low vaccine supply.

In an attempt to accelerate vaccinations, the ministry in February announced that it would welcome private sector initiatives to import and distribute vaccines, allowing them the freedom to determine their own priority lists for recipients.

On March 26, 50,000 doses of the Russian-made Sputnik V vaccine were delivered to Lebanon — the first batch of some 1 million doses procured by the Lebanese businessman Jacques Sarraf. These vaccines are available for the private sector, with private companies, municipalities and politicians already making deals to purchase the Sputnik V vaccine.

Last Tuesday, the outgoing health minister announced that his ministry had struck a deal with Pfizer-BioNTech for an additional 750,000 doses of its COVID-19 vaccine, which will be sold to the private sector and become available in June.

He provided limited details on the deal, other than that academic institutions and professional syndicates will be able to buy the Pfizer-BioNTech vaccine at $12 per dose. A special committee has been formed at the ministry to establish who is interested in the vaccine and how many doses they wish to buy.

Representatives from the Health Ministry could not be reached for further details.

Although Hassan did not specify whether or not these new doses of the Pfizer-BioNTech vaccine would be allocated according to the ministry’s plan, the way the private sector vaccination has worked so far suggests it will be the buyers choosing who to give them to.

The announcement was unexpected, given that health officials had said the company was willing to sell only to government entities. Pharmaceutical importers and private companies previously told L’Orient Today they were not able to secure deals with Pfizer for this reason.

In an email, Pfizer’s press office said it was not offering its vaccine to the private market and that agreements were with national governments. However, the statement said the company is “providing doses according to their [national governments’] preferred channel and designated vaccination locations, subject to relevant regulatory authorization or approval.”

The company did not respond to requests for further comment.

Due to Pfizer-BioNTech’s unwillingness to sell to the private sector, Hassan said, the Health Ministry will purchase the additional doses, and any private sector actors wishing to acquire them must deposit the cost of the required number of doses at the central bank.

A BDL spokesperson could not provide any additional information on the mechanism.

Over the weekend, Lebanon received a shipment of 46,800 Pfizer COVID-19 vaccines, bringing the total number of Pfizer doses received so far to 297,180.

The vaccination program has now been running for around six weeks and has been criticized for its slow rollout and marred by accusations of line-jumping.

During his interview, Hassan said that the process should speed up in the next month, with 200,000 doses each coming from AstraZeneca and Pfizer-BioNTech.

The ministry has said it aims to offer appointments by April 13 to all those over 65 who registered on the Impact platform before the beginning of the month.

BEIRUT — Lebanon received a donation of 90,000 doses of the Chinese-made Sinopharm vaccine on Tuesday — its first donation of COVID-19 inoculations from a foreign state.However, these vaccines are set to be administered outside a national vaccination plan that is currently prioritizing health care workers, residents older than 55 and those with pre-existing health conditions, caretaker...