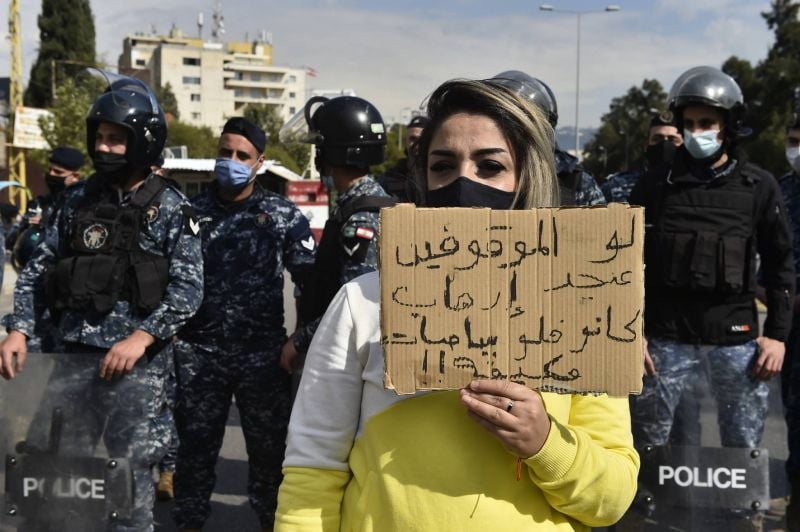 A protester at the Military Tribunal in Beirut on Monday holds a sign reading, “If those arrested were really terrorists, they would have left in air conditioned buses,” a tongue-in-cheek reference to the state-sanctioned transport of Daesh fighters from Lebanese soil in 2017. (Credit: Hussam Shbaro)

BEIRUT — In an unusual move that appears to represent an escalation in Lebanese authorities’ response to crimes committed by protesters, a military court official has brought terrorism charges against 35 people in relation to last month’s violent protests in Tripoli.

Ayman Raad, one of a group of lawyers representing the Tripoli protesters and who had also represented other protesters arrested in the mass protests of 2019 and 2020, told L’Orient Today that to the attorneys’ knowledge, this is the first time terrorism charges have been brought against protesters at least since the beginning of the Oct. 17, 2019, uprising.

A judicial source, who confirmed that 35 protesters had been charged with new counts of terrorism and theft Monday, said that the judge who brought the charges, Military Tribunal Prosecutor Fadi Akiki, “considered that [the protesters] burned the Tripoli municipality building and threw Molotov cocktails at the Tripoli serail, so he considered that these were terrorist crimes that they committed.”

The terrorism and theft charges were added to other counts the protesters had been facing previously, including protesting without permission, using force against the Lebanese Army, and arson, Raad said. Terrorism charges carry a maximum penalty of death.

Of the 35 protesters currently charged, 18 are still in detention — including one minor — while six were detained but have been released and the rest remain out of custody, Raad said.

He added that of the detained protesters, only four had had an attorney present while being interrogated by army or Internal Security Forces intelligence officers. However, attorneys were able to represent most of the defendants via video conference later when they appeared in front of a judge, he said.

While it is common for groups of protesters to be charged together, Raad said, “this group in this file, they are considered [by prosecutors] as one gang that went down with previous premeditation to burn the serail and to clash with security forces. So this previous premediation and prior agreement [according to Akiki] makes them a terrorist organization.”

That has troubling implications for future protests, given that most protest actions are organized by prior agreement, at least loosely via social media groups, he said.

“Of course we’re concerned about this escalation because it shows that the judges — but it is driven by a political decision, I think — are escalating to where they are considering that if five guys went to Tripoli in one car, if they moved from Beirut to Tripoli in the same car, they are forming a terrorist organization or terrorist gang,” he said.

Human Rights Watch has previously raised concerns about civilians, including protesters, being tried in military courts.

HRW Lebanon researcher Aya Majzoub told L’Orient Today that civilians tried in military courts had reported violations including “interrogations without the presence of a lawyer, ill-treatment and torture, incommunicado detention, the use of confessions extracted under torture, lengthy pretrial detention, decisions issued without an explanation, seemingly arbitrary sentences, and a limited right to appeal.”

Along with the use of military courts, the apparently new practice of bringing terrorism charges against protesters or rioters is likely to have a “chilling effect on free speech and free assembly,” Majzoub said.

“While there is no single definition of terrorism in international law, the term should only be used for the gravest crimes of political violence,” she said. “Terrorism charges should certainly not be used to prosecute demonstrators who are simply alleged to have carried out acts of public disorder or simple violent crimes committed while protesting against the government.”

Chaotic and sometimes violent protests broke out last month in Tripoli against a strict COVID-19 lockdown imposed without government assistance to offset the effects, and against the general deterioration of living conditions in the country.

Security forces alleged that protesters had lobbed grenades at them along with rocks and Molotov cocktails; on at least one occasion, security forces opened fire with live bullets to disperse the crowd. One protester, 29-year-old Omar Tayba, was killed by a bullet to the back.

Protesters have repeatedly gathered in Beirut since then to call for the release of the arrested protesters.

Raad said he was particularly concerned that not only had protesters been interrogated without a lawyer, in violation of their rights, but that in some cases, officials had actively impeded attorneys from locating the detainees.

Military Tribunal judges had refused to give attorneys a list of the detainees, he said, and in some cases, when attorneys went searching for people who were known to have been arrested, officers at police stations and military and ISF intelligence detention centers had either refused to say whether they were present or had denied the presence of people who later turned out to have been there.

At one point, he said, the ISF had put out a missing-person report for a minor who eventually turned out to have been in detention.

BEIRUT — In an unusual move that appears to represent an escalation in Lebanese authorities’ response to crimes committed by protesters, a military court official has brought terrorism charges against 35 people in relation to last month’s violent protests in Tripoli. Ayman Raad, one of a group of lawyers representing the Tripoli protesters and who had also represented other protesters...