Lebanon: The spectacle of disintegration 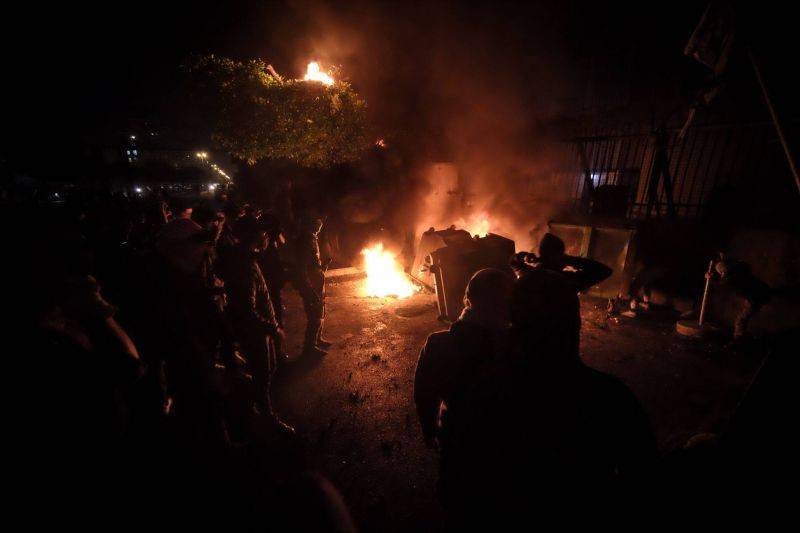 It was clear to everyone that hunger, poverty, the absence of a state and of leadership would set the country alight, starting with Tripoli. As foreseen, violence is in the streets. And this is only beginning. The numbers of dead and wounded now sit alongside those of COVID-19 victims. Against the virus, there is hope — maybe — that a vaccine will come to the rescue. Against the collapse of the country, what conceivable solution is there?

The implacable thing about disintegration is that it very quickly becomes self-sufficient. Beyond a certain level of decline, it is unavoidable. What happens can no longer not happen. It alone contains the road map for the future. Everything is in place for the country to fall, collapse, end. What people still find somehow hard to grasp is the extent of the political authorities’ connivance in spreading the gangrene. More than connivance: zeal! It is as if they unanimously and obstinately refuse everything that could counter the disease or delay it, even a little.

No suffering, no death, ever elicits from them a word of empathy or condolence. In the aftermath of the Beirut port explosion on Aug. 4, they seemed more dead than the dead. They no longer have any compatriots, any connections with life outside their own. They have nothing left but themselves. In high places, each disaster is seen as a useful piece of a jigsaw puzzle that keeps them fully occupied: the jigsaw of a dismembered country. They play slowly and in silence, sharing out the pieces, fitting them together, separating them. They patiently compose the decomposition. Contrary to what people may think, they are not idle, they are working. Their inertia is organized, it is a defense accompanied by a pocket calculator: over time, it wears us out and protects their interests. No wonder, then, that they are utterly indifferent to the appeals of the population. Why would they come to the rescue if the idea is to divide the people?

That is merely a theory? Let us consider another: they want what they have always wanted — each one their slice of cake — with the perfect excuse of benefiting the members of their communities. Each their money, each their share of the people, each the right to steal in the name of retaliation. You steal, I steal, I cover you, you cover me, etc. On close scrutiny, there is nothing contradictory between this and the preceding scenario. They have no country to govern. What they do have to govern is an agreement based on a disagreement. They self-govern. They govern their survival and they do so efficiently. Each one props up the other. The edifice is collapsing, they hold firm. But who allows — helps them even — to hold firm?

That is where matters grow complicated, and the painful thing is that we are possibly all complicit to some extent. By all, I mean first and foremost the Lebanese, the inhabitants of this country as a whole. I also mean the so-called foreign powers, bordering Lebanon or farther away, which have an interest in allowing the country to rot and fall apart. And then collecting the winnings. This last aspect being vast, impossible to deal with in few words, let us park it for the time being. And let us focus here on … us. Are we certain of having done everything we could to drive out the cabal? Did the opposition parties, the associations, mobilize and join forces as was needed in order to pose a serious threat? Admittedly, it is extremely difficult to forge robust alliances in a country where every step forward means a renunciation; every decision, an incalculable number of consequences; every option, a good reason to object. There is in the Lebanese equation something that is fundamentally unsolvable. That is an almost perfect obstacle. But even so, there is also an immense capital of positive energies which has probably not been exploited as it could, or should, have been. Are we certain we have broken with the language we are questioning? Apart from faith affiliations, there is in Lebanon such a web of personal relations between what we call the authorities, on the one hand, and Lebanese society on the other, that it is almost impossible to cut through the fabric. The country’s small size works against it in this respect. Just as the ground is systematically invaded by concrete, individuals are invaded by interests and inextricable ties. How many competent people, capable of bringing about change, are hamstrung, restricted by their links with a particular warlord or corrupt businessman? How many journalists have a soft spot for one mafioso, a grudge against another, to such an extent that together they are helping to maintain the status quo. The lack of a separation, or even of boundaries, between those officially in charge and those seeking change has created, within each one of us, areas of mental confusion, if not duplicity, which are incompatible with the principle of radical change.

There is on the other hand in Lebanon an incredible compatibility between endurance and indulgence. Each one of us had our Lebanon before October 2019, each person had their thawra (revolution). Are we still capable of holding one single discourse across the entire country and its entire population, irrespective of our individual interests, faiths and preferences? Are we still capable of creating a counterbalance to the general collapse? I do not know. I only know that we are not, nor ever will be, critical enough of ourselves if we want our protest to have the slightest credibility. Is there any point, people will ask, in remaining critical when we have no solution to put forward? Nothing is less certain. But insofar as the power of speech has not yet been denied us, perhaps we should continue to exhaust every possible means.

This article was originally published in French in L’Orient-Le Jour. Translation by Ros Schwartz.

It was clear to everyone that hunger, poverty, the absence of a state and of leadership would set the country alight, starting with Tripoli. As foreseen, violence is in the streets. And this is only beginning. The numbers of dead and wounded now sit alongside those of COVID-19 victims. Against the virus, there is hope — maybe — that a vaccine will come to the rescue. Against the collapse of...