"I Had to Throw My Baby's Body into the Sea": When Fleeing Lebanon Becomes a Tragedy

Due to the severe economic crisis, more and more people are risking everything to leave the Land of the Cedars. 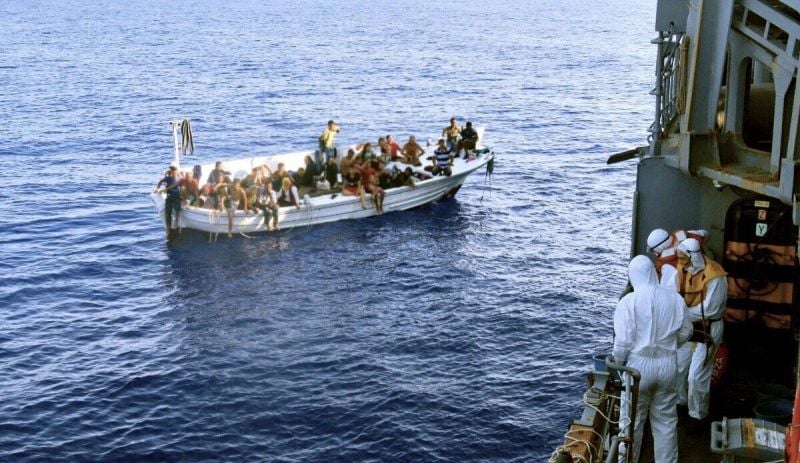 UNIFIL soldiers preparing to rescue 36 people aboard a makeshift boat off the coast of Lebanon on September 14, 2020. Photo from UNIFIL's Twitter account @UNIFIL_

"I was ready to go to jail in any country rather than return to Lebanon," Mohammad el-Mohammad told L'Orient-Le Jour. The 21-year-old Tripolitan father of embarked on September 7 on a boat for an illegal crossing to Cyprus. But the boat, abandoned by the smugglers, drifted for several days in the middle of the Mediterranean before being spotted and escorted by the UN Interim Force in Lebanon (UNIFIL). It was with his pregnant wife and their two-year-old son, Sufyan, that el-Mohammad set sail. But it was without his child that the young father was repatriated to Lebanon. Little Sufyan died when the boat drifted too far.

With the continuously worsening economic crisis in Lebanon, many people, having lost all hope and having no access to legal channels of emigration, are trying, by all means, to leave Lebanon with the hope they can rebuild their lives elsewhere. And with these attempts at illegal emigration, tragedies multiply.

This Thursday evening, the body of a man who had embarked in Tripoli for an illegal departure was found several dozen kilometers off the coast of Saadiyat. He was buried on Friday in the capital of northern Lebanon. Six passengers from this boat are still missing. Their families blocked several streets leading to Abdel-Hamid Karami (al-Nur) Square in Tripoli, demanding that the authorities conduct search operations.

There is no exact figure today for such illegal departures, but the number of people arrested in Cyprus after illegal crossings from Lebanon is on the rise. Between July and September, 21 attempts of illegal migration to Cyprus, mainly by Syrians, but also by Lebanese and foreign workers, were reported, according to UN sources. According to AFP, five boats, carrying more than 150 migrants in total, were spotted during the month of September near the Cypriot coast. On Friday, the UN High Commissioner for Refugees (UNHCR) and the UN Children's Fund (UNICEF) expressed their "deep concern" over several attempts at illegal emigration off the Lebanese coast that have resulted in several deaths. They said they were "shocked by the death of a woman and children during these migrations" and called for addressing the root of the problem, namely "poverty and lack of economic opportunities" in Lebanon.

For their part, the Lebanese authorities went on alert on Friday. Outgoing Prime Minister Hassan Diab instructed outgoing Foreign Minister Charbel Wehbe to make the necessary contacts with the Cypriot authorities and outgoing Interior Minister Mohammad Fahmi to follow up on the case with the security services.

"I fled Lebanon in the hope of being able to work elsewhere and provide food for my little one," said Abu Sufyan, with a tight throat. "I did not have big ambitions." Abu Sufyan's dream was, simply, to be able to buy sweets for his child, to offer him a packet of chips or fruit juice. He dreamed of never letting Sufyan fall asleep on an empty stomach again. It was hunger and thirst that finally took his son away, in the middle of the Mediterranean. "I gave him sea water to quench his thirst, but he fell ill and finally died two days after leaving the port of Miniyeh in Tripoli," Abu Sufyan said. He added, "For four days I did not know what to do with my child's body. I wrapped it in a white cloth and carried it in my arms for as long as I could. But after a while I had to choose: either I see my child's body decompose in my arms, or I recite a prayer and give him to the sea." After some silence, Abu Sufyan added, "I had to throw my baby's body into the sea..."

Victims of a Scam

According to Abu Sufyan, the passengers of the boat were victims of a scam. "I did not know the smuggler personally," he said. It was through family members and neighbors in the neighborhood that he came into contact with the smuggler and his crew. "I did everything I could to secure enough money to book a place for my family on the boat and get out of the country," he said. When they arrived at the port with their belongings, water, food and baby milk, the smuggler in charge prevented them from carrying them to the makeshift boat, assuring that the crossing would take no more than six hours and that a large boat with water and food was waiting for them offshore. But once at sea, the second boat carrying the guides and smugglers disappeared, said Abu Sufyan, abandoning the migrants' boat to its fate. "We remained in the middle of the Mediterranean without a guide for eight days."

Today, the grieving father is convinced: the smuggler confiscated the passengers' belongings on purpose so that they would starve to death and be swallowed by the waves. "In this way, he would have secured the cost of the crossing and we would have found death in the greatest silence, in the middle of the sea," the young man said in a strangled voice. And so, he would escape any legal proceedings." Abu Sufyan said that during these eight days, the passengers saw several boats pass by, one of which was flying a Chilean flag. The drifting passengers shouted "Help" and "Police" in English, but no one was interested in their fate. The boat, which had 37 people on board, including 12 children, was finally saved by UNIFIL. Several passengers died during the eight days of sea travel, including children and a woman. When the boat finally reached Beirut, many of the other passengers were in critical condition and had to be rushed to hospital.

Ready to Give It another Try

"I begged those who saved us not to take us back to Lebanon, but they did not understand Arabic. They did not realize they were sending us back to the country that was the cause of my little one's death," he said. To cover the cost of his illegal emigration, Abu Sufyan sold the furniture in his home. He borrowed money from relatives and his sister sold gold jewelry to help him insure the sum of LL10 million."Today, I am the father of a child who is no longer and I am even poorer than before," Abu Sufyan said. The young Tripolitan has been unemployed for more than a year. Before he was laid off, he was working in a restaurant in Tripoli for the monthly salary of LL600,000. "I was paying LL450,000 in rent for my home and only had the modest sum of LL150,000 left to support my family."

Today, in spite of the nightmare he has lived and continues to endure, Abu Sufyan said he is determined to try the crossing again."I left mainly to ensure a dignified life for my child, but now that he is gone, I have nothing more to lose," he said. "It is true that my wife is pregnant, but if I stay here, Lebanon's leaders will kill my second child, I am sure."

"I was ready to go to jail in any country rather than return to Lebanon," Mohammad el-Mohammad told L'Orient-Le Jour. The 21-year-old Tripolitan father of embarked on September 7 on a boat for an illegal crossing to Cyprus. But the boat, abandoned by the smugglers, drifted for several days in the middle of the Mediterranean before being spotted and escorted by the UN Interim Force in Lebanon...

Nakba anniversary, EU sanctions, Eid al-Fitr begins: Everything you need to know to start your Thursday

From friend to foe: The EU prepares sanctions on Lebanon

Lebanon faces ‘total darkness,’ US sanctions, two-day Eid lockdown: Everything you need to know to start your Wednesday

Is there even a glimmer of light left at the end of Saad Hariri’s tunnel?