Why the Shiites Care So Much About the Finance Ministry

Beyond the political context and clientelist considerations, Amal and Hezbollah are always looking for levers to control government action. 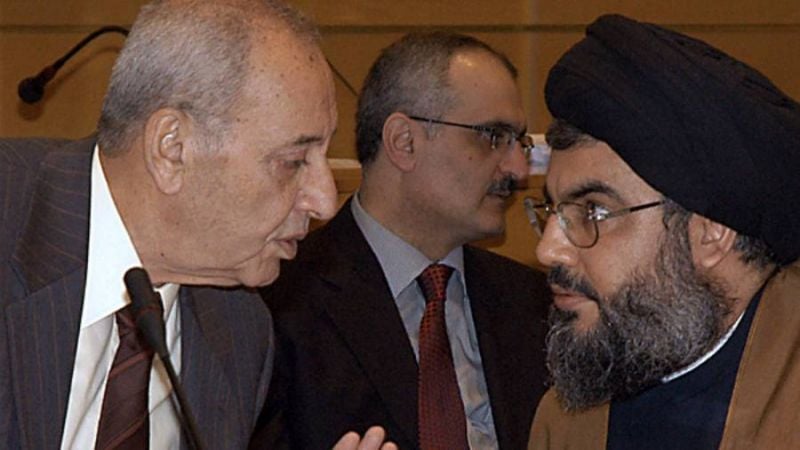 The insistence of the Shiite duo (Hezbollah and Amal) on obtaining the finance ministry in the next cabinet has little to do with a particular political context and even less with a seasonal whim. This is a constant demand that is rooted in the historical frustration felt by a large part of the Shiite community with regard to the role assigned to it within the framework of the institu-tions, especially with regard to the mechanisms of the executive authority.

The current context surrounding the process of cabinet formation – the French initiative and the new turn taken by the US sanctions policy – certainly has an impact on the progress of this process, but it does not dictate the general attitude of the two Shiite groups regarding the form of cabinet in Lebanon, and in particular on the question of the attribution of the finance minis-try.

If the constitution and customary rules were applied rigorously – which has not been the case for ages – we would see that the formation of the cabinet, its investiture by parliament through a vote of confidence, its decision-making and its downfall are steps that are completely beyond the control of the Shiites, while the opposite is true for Christians and Sunnis.

Admittedly, since the adoption of the Taif Agreement (1989) into the constitution, the power of the Maronite president has become marginal in the process of appointing the prime minister, since the head of state is supposed to carry out binding consultations with parliamentary blocs for this purpose, so that the premier is, in the end, appointed by cooption by the blocs in ques-tion. But the president is catching up in the process of forming the cabinet, since the constitu-tion allows him to refuse to endorse the proposals presented to him by the prime minister-designate, who is then called upon to review his proposal.

In addition, the numerical weight of Christian deputies in parliament (64 seats out of 128), even if they are politically divided, makes it almost impossible for a cabinet to gain parliamentary confidence if the main Christian blocs deny it. This is not the case for both Sunnis and Shiites, as each of the two communities has only 27 seats. But if the Sunnis are in the same boat as the Shiites as far as the vote of confidence is concerned, the fact remains that they have three deci-sive levers at their disposal: 1- The prime minister-designate is empowered by the constitution to form a cabinet to his liking, without taking into account the results of his consultations with parliamentary blocs, being merely required to obtain the consent of the head of state. 2 - It is the prime minister who sets the agenda for the meetings of the council of ministers, while the president of the republic may put forward subjects for discussion but not on the agenda. 3 - By his resignation, he puts an end to the existence of his cabinet at any time, knowing that the res-ignation of one third plus one of the ministers also leads to the fall of the cabinet. Since the Shi-ites cannot form this third plus one by themselves, they theoretically have no control over such a decision.

The most notorious example of the latter is the resignation of the six Shiite ministers (Amal and Hezbollah) from the first Siniora cabinet (2005-2008), mainly to protest the cabinet's efforts to create the Special Tribunal for Lebanon to try the assassins of former Prime Minister Rafik Hariri. At the time, the majority (March 14) in power considered, in accordance with the text of the constitution, that the withdrawal of six ministers (they had, moreover, not formally re-signed) could not lead to the fall of a cabinet of 24, one third plus one being in this case equal to nine. For its part, the Shiite duo, later joined by Michel Aoun's Free Patriotic Movement, felt that by losing its Shiite component, the cabinet no longer had any legitimacy, since the pream-ble to the constitution insisted on the imperatives of national coexistence.

The misunderstanding actually stems from a huge historical gap between the philosophy behind the constitution and the national pact – a philosophy reinforced by Taif – and the current local and regional context. The basic idea of the whole Lebanese political system rests on the global Islamic-Christian coexistence, which has become parity with the new constitution. Nothing can be done in Lebanon if all Christians or Muslims are opposed to it. This philosophy corresponded to an Islamic-Christian political fracture that was in place for many decades but which is clearly no longer the case today. It has been replaced by other fractures on a smaller scale. But unlike among Christians, where the main cleavage (Lebanese Forces/Free Patriotic Movement) is not sectarian, but rather totally political (except for the stupid jokes around Easter), among Mus-lims, the divide and thus the contours of political leadership coincide with confessional bounda-ries (Sunni-Shiite-Druze).

Faced with this situation, it is understandable that the Shiites – and in particular Hezbollah – are demanding a change or an evolution of the political system. This is a demand that the other main actors have so far rejected, quite legitimately stressing that a new republic should not be discussed with a party that is the only one in the country with an arsenal. Hence the impasse... What does the Shiite duo answer then? All right, we will not change the system, but on the con-dition that from now on we will always have cabinets of national union or accord, with, if possi-ble, when the March 8 Coalition is a minority in parliament, it gets one third plus one of the cabinet seats and, icing on the cake, the... finance ministry.

This status quo was enshrined by the Doha conference in May 2008, which institutionalized, at the expense of the constitution and laws, the principle of consensus.

It is true, however, that the Shiites did not systematically demand the finance ministry every time a cabinet was formed. In fact, it depends on their assessment of the degree of control they have over the developing practice. At the time of the Syrian trusteeship, they had sufficient guarantees on the behavior of the cabinets not to make this requirement a condition of their participation. The situation is different today.

But why specifically the finance ministry? Simply because its embodies this famous "fourth sig-nature." It is known that decrees must be countersigned by the president of the republic, the prime minister and the minister(s) concerned. Finance is the ministry most concerned by most decrees, since there is often a financial component in cabinet acts.

This "fourth signature" thus gives the Shiites a serious lever of control (and blockage) over the actions of the executive authority, which the constitution and customary rules deny them. As a result, it is the "distribution by thirds" (Christian-Sunni-Shiite) or rather by quarters (the Druze quarter) that unofficially imposes itself in the face of Islamic-Christian parity. While waiting to get out of the impasse...

The insistence of the Shiite duo (Hezbollah and Amal) on obtaining the finance ministry in the next cabinet has little to do with a particular political context and even less with a seasonal whim. This is a constant demand that is rooted in the historical frustration felt by a large part of the Shiite community with regard to the role assigned to it within the framework of the institu-tions,...