Will Lebanon have a ski season this year?

Insufficient snowfall has prevented winter sports enthusiasts from skiing yet this season. But winter is not over, and February is expected to be colder. 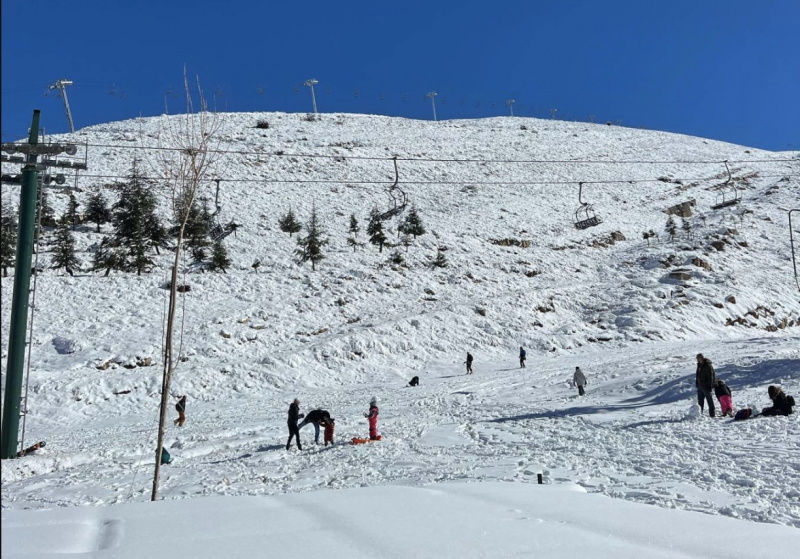 After an exceptionally cold and snowy winter last year, the weather this January looks less promising for Lebanon's ski resorts.

The country's ski season has yet to begin given the absence of sufficient snow. This is especially concerning to businesses in the mountains that rely on winter income.

Some are wondering if there will even be a ski season this year.

Meteorological experts, however, are hoping that February will bring more precipitation.

In Kfardebian, at the heights of Kesrouan, the slopes are still empty, but the management of Mzaar ski resort remains optimistic.

“We will try to open soon, with all the necessary security measures. Hopefully, we will have more snow and sunny weekends,” said Nicole Wakim Freiha, Mzaar's marketing and communication manager.

Despite the drop in temperatures, the weather has not been generous in terms of snow. But skiers have already reserved their tickets at Mzaar as they wait for the season to start.

“We have made a pre-sale of subscriptions for the entire season at reduced prices,” Freiha told L'Orient-Le Jour. “The ski season is advantageous to the entire area.”

As snow eludes the mountain, the economic fallout is being felt.

According to Josephine Zgheib, director of the tourism committee in the Kfardebian municipality, winter activities benefit more than 200 families in the area, directly or indirectly.

“More than 50 percent of the inhabitants benefit from the ski season, whether they are instructors, equipment rental companies, or restaurants and parking employees,” Zgheib said. “Many young ski instructors wait for the season to earn money to cover part of their university fees.”

Johnny Keyrouz, a partner in the ski resort of Bcharre-Arz, said the start of the season normally begins around Christmas and that the delay has already caused “losses of 25 to 30 percent.”

“These losses are unrecoverable because the season is short. It usually ends in mid-March or early April, at the latest,” Keyrouz said. “We'll need a storm and more snow on the slopes to be able to open.”

Keyrouz added: “Snow is not just about skiing, but also about a lot of other activities that benefit the local economy and range from buying a sandwich on the way up, to having lunch at a restaurant, or stopping by a local gas station, just to name a few activities.”

Commenting on this season's snow delay, the head of weather forecasting at Beirut International Airport, Abdel Rahman Zawawi, explained that Lebanon's precipitation has decreased over the last 30 years.

“There has been some snowfall since the beginning of the winter, but it has been light and most of it has been at altitudes above 2,000 meters,” Zawawi told L'Orient-Le Jour. “But there has been more rain this year compared to the same period in 2012, which is beneficial for agriculture.”

Snow, on the other hand, is down compared to last year because the low-pressure atmosphere over the region is not intense enough, according to Zawawi.

“We think there will be more snowfall by early February. It's been two years of below-average precipitation. If the same trend continues, the situation could become more complicated,” Zawawi explained, expressing concern for the country's natural water supply.

Water supply in Lebanon is mainly sourced from snowmelt that feeds into the groundwater, not rainfall. Zawawi also dismissed the climate change influence on snowfall in Lebanon.

“Climate change has not really affected the precipitation but rather the minimum temperature in summer, which has come closer in recent years to the maximum temperature,” Zawawi explained.

Wajdi Najm, former director of the Regional Center for Water and the Environment at Saint Joseph University, offered some reassurance.

“It is normal that the amount of rainfall varies from year to year. We must not forget that it is still January and winter is not over,” he said.

Zgheib, for her part, is starting to think about alternatives, “in case winter sports come under threat from climate change.

“Back in 2015, there was no ski season at all,” she recalled. “We've thought several times about activities that can be done in the absence of snow, but it's expensive to put them in place.”

“We could try to invest more in summer festivals,” she mused.

After an exceptionally cold and snowy winter last year, the weather this January looks less promising for Lebanon's ski resorts.The country's ski season has yet to begin given the absence of sufficient snow. This is especially concerning to businesses in the mountains that rely on winter income.Some are wondering if there will even be a ski season this year.Meteorological experts, however, are...