The veteran journalist was no stranger to challenging interviews with world leaders and celebrities. Her conversation with Yasser Arafat in Beirut in 1977 proved more difficult, not least because it cost the lives of two of her colleagues.

BEIRUT — The last week of 2022 was a sad one, with many well known figures passing away, including footballer Pele, fashion designer Vivian Westwood and Pope Benedict XVI. Perhaps the biggest blow to the world of journalism was the death of Barbara Walters, who passed away Dec. 30, 2022, at 93. As news broke of her demise, social media was flooded with snippets of her most famous interviews with celebrities and world leaders alike.

One of Walters’ more prescient interviews, perhaps, arose from her 1977 meeting with late PLO leader Yasser Arafat in Beirut.

Walters had wanted to interview Abu Ammar for years. Her requests were declined until 1977.

At the time, Arafat was in a tight spot. Palestinian factions in Lebanon found themselves weakened after the Syrian occupation began a year earlier. Moreover, Arab sympathy for the Palestinian cause had been waning, with Egypt about to start negotiating what would later become the Camp David Accord with Israel. Other Arab countries, notably Iraq and Libya, threw their support behind other Palestinian factions.

Walters and a TV crew flew into Beirut on September 15th for an interview set to air on a Sunday morning news program. Upon landing there was gunfire in her proximity and the broadcaster feared she’d be kidnapped. “Who could be a better candidate than a nice Jewish girl doing an interview with Yasser Arafat on Yom Kippur,” Walters told The Washington Post later that month.

She found that the violence had wreaked havoc on the city’s urban fabric. “The modern buildings in the city’s center stood empty, their windows shattered, as did the abandoned resort hotels along the Mediterranean,” she reflected in her 2008 memoir Audition.

During her first few days in the city, Fatah members took Walters on tours of Palestinian camps to film. In her memoir, she recounted that “there was no denying that the Palestinians lived in squalor.”

To expedite production of the segment, the crew needed to send footage to New York as quickly as possible. At that time, Beirut lacked any satellite telecommunication infrastructure for high-speed transmission of data. The nearest place offering such services was Amman, so Walters’ producers David Jayne and Larry Buckman flew back and forth several times during the week in Beirut to transmit raw footage back to New York. 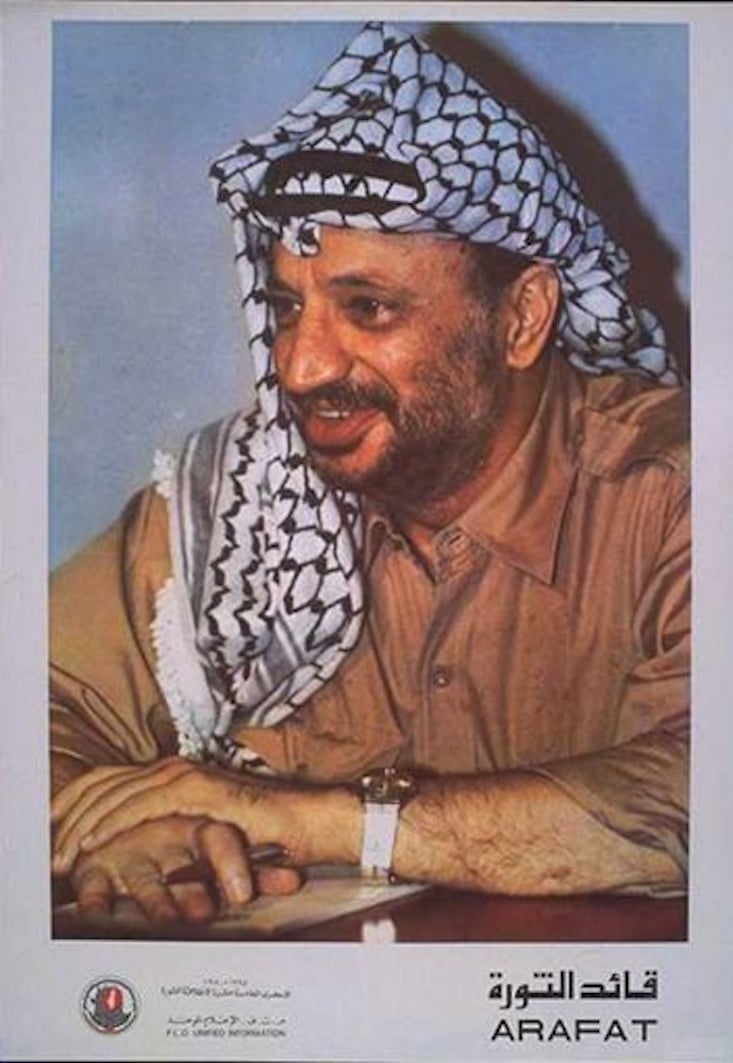 PLO Chairman Yasser Arafat, as seen in one of innumerable posters released over the years. (Credit: Yasser Arafat Foundation)

Arafat kept them waiting for days. Then, on the evening of September 22, they were put in a car and driven in circles — a tactic used to conceal the interview venue — until reaching a residential building in an unnamed location.

Inside, Walters met Arafat for the first time. He was not wearing his signature keffiyeh and she wrote that she was shocked to realize he was bald. He put one on for the interview.

When the conversation ended, Arafat took off the keffiyeh, and penned “revolution until victory” on it. He also handed her a traditional mother of pearl inlay box and a dress made of tatreez (traditional Palestinian stitching). AP photographer Harry Koundakjian’s images of the exchange and the signing can be found online. Unfortunately they could not be cleared for this article.

The next day, Jayne and Buckman flew back to Amman to transmit the footage to New York. Walters intended to join them but at the last minute decided to head to Paris instead. The move saved her life.

As the two producers were about to depart Amman to join Walters in Paris, their chartered flight crashed during takeoff, killing them and the two Jordanian pilots they were with. According to an International Civil Aviation Organization circular, the most likely reason for the crash was “a possible fuel imbalance at the time of take-off.”

The victims’ families sued the parent company of the chartered jet.

News clippings from that time suggest that a segment of the footage was transferred and broadcast on the Sunday news segment. The balance of the filmed interview was lost in the plane crash. Walters had the transcript of the interview, though, and she used this for the program she hosted upon her return. Although some of the footage was transferred and broadcast the next day, most of it was on board with them and was destroyed.

According to the New York Times, whose journalists saw a transcript of the interview, Arafat said, “We are looking for a new resolution which must have in its consideration our rights, our rights to establish an independent state. If it is so, this is what we are looking for. I hope that your government, the American government, will push forward in this channel.”

Walters grilled him about the peace process and he was ambivalent as to whether he would support one or not.

As soon as she returned to her desk on the nightly news, the journalist paid tribute to her producers. She felt personally responsible for their deaths. “Newsmen

and women are supposed to be impersonal on the air,” she writes, recollecting the broadcasts in her memoir. “It’s part of our code ... I know it’s not the business we’re in, but I ache for their children and ourselves at ABC News.”

Walters kept Arafat’s signed keffiyeh next to a lamp that the Israeli foreign minister gave her.

In her memoir, Walters wrote that she had wanted to keep it as a memento. Her housekeeper, not knowing Arabic, “did not see the imagery. She saw an ink stained piece of cloth and put it in the washing machine. That took care of that souvenir.”

BEIRUT — The last week of 2022 was a sad one, with many well known figures passing away, including footballer Pele, fashion designer Vivian Westwood and Pope Benedict XVI. Perhaps the biggest blow to the world of journalism was the death of Barbara Walters, who passed away Dec. 30, 2022, at 93. As news broke of her demise, social media was flooded with snippets of her most famous interviews...