Director Lara Saba discusses her new feature, All Roads Lead to Rome, and its marked departure from her other work. 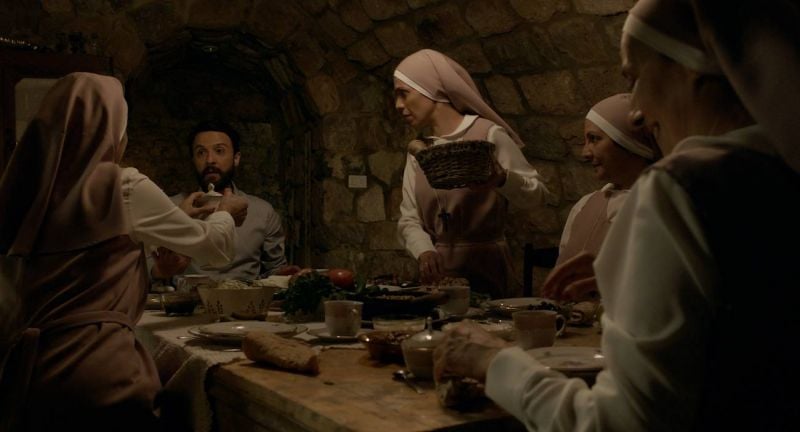 BEIRUT — Lara Saba’s second feature is not a Christmas movie. That said, All Roads Lead to Rome, opening Thursday, Dec. 15, might easily be viewed as a light-hearted offering to a citizenry weighed down by years of crises — not least those inclined to celebrate Christmas.

The film is told from the perspective of Hadi Najm (Chadi Haddad), an actor much loved by the melodrama-absorbed segment of the public (the character’s name, the audience is reminded, means “Calm Star”). Najm’s work — his past roles include Jesus — has got him short-listed to play “the young pope” in an Italian production.

Unremitting fan and media attention in the run-up to his Italian debut drive the actor to flee Beirut in search of some quiet time in his family’s village in Qannoubine, in north Lebanon’s scenic Qadisha Valley — where most of this wafer-thin tale unfolds.

Scripted by Josephine Habchi from a story devised by Haddad and producer Antoine Khalife, All Roads Lead to Rome is family entertainment, a G-rated romantic comedy entangled in fish-out-of-water tropes.

Though he apparently spent happy years at his grandparents’ house in Qannoubine, Najm’s time in Beirut (or perhaps in television?) seems to have transformed the northern boy into a rather anemic adult, and much of the movie’s humor derives from the urbane Beiruti’s incongruous encounters with the nuns, their priest (Rifaat Torbey) and the rustic folk of Qannoubine. 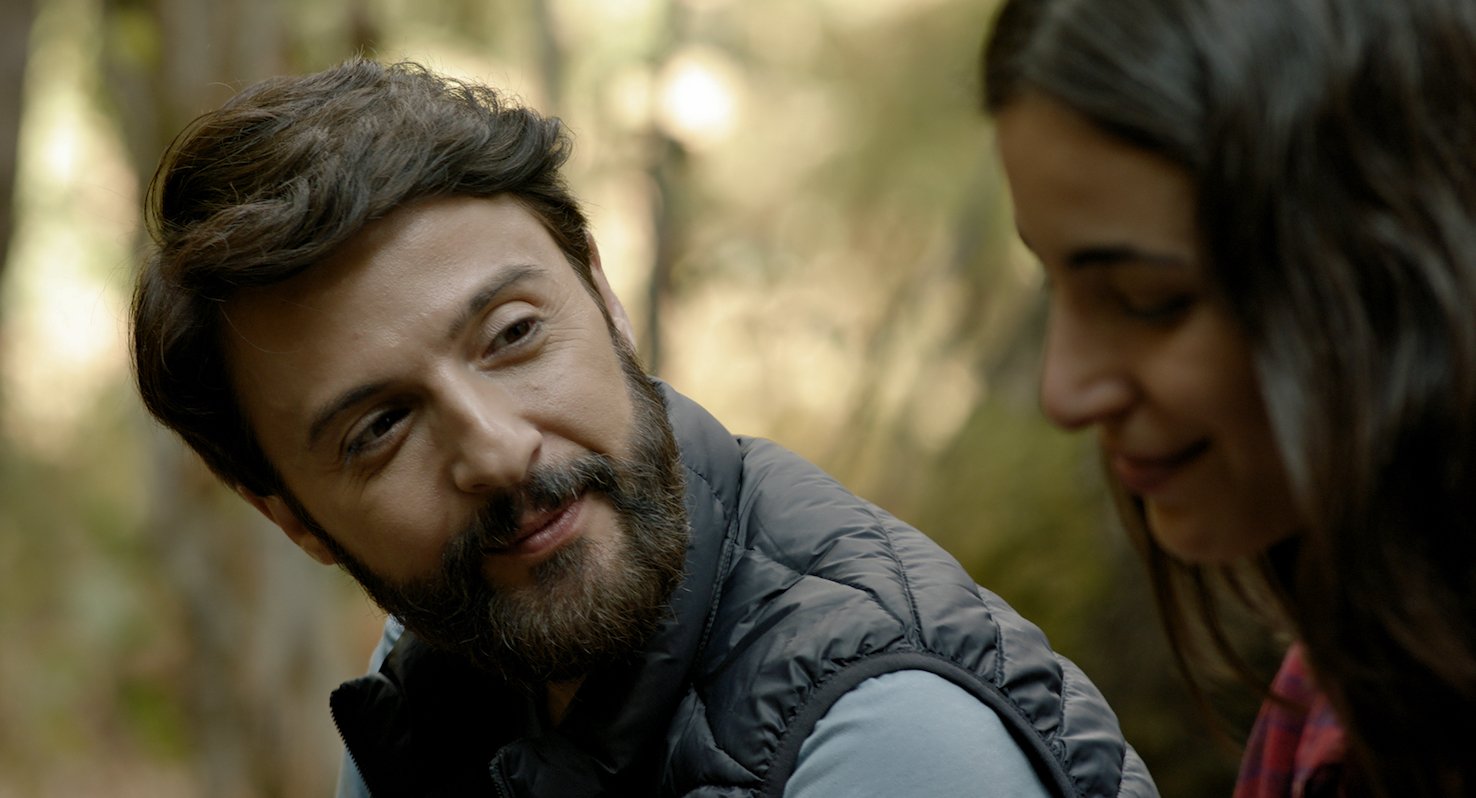 Chadi Haddad, left, and Ruba Zaarour in a still from “All Roads Lead to Rome.” (Courtesy of: Wakanda Films)

Most of the action is set at a Qannoubine convent, overseen by Mother Superior Sister Paola (Julia Kassar), where all but one of the female cast is a nun. As this is church-sanctioned family entertainment, there’s little suspense about which female will become the hero’s love interest — Sister Paola’s niece, Celine (Ruba Zaarour), who’s in the midst of reassessing her life choices.

From dangerous intersections to Roman roads

All Roads Lead to Rome is Saba’s long-awaited follow-up to her first feature, 2012’s Blind Intersections. Scripted by Nibal Araqji, that film is a social-realist drama depicting three unhappy tales about people of different generations, residing at various strata of Beirut society.

Saba says Rome came to her at the right time.

“It was 2019,” she recalls. “It had been seven or eight years since I’d made Blind Intersections, so I was eager to get back to shooting. Along came Chadi and Antoine with a script. It was ... funny. It was light.”

Rome is Habchi’s first script to be produced, and Saba encouraged her to make some adjustments. 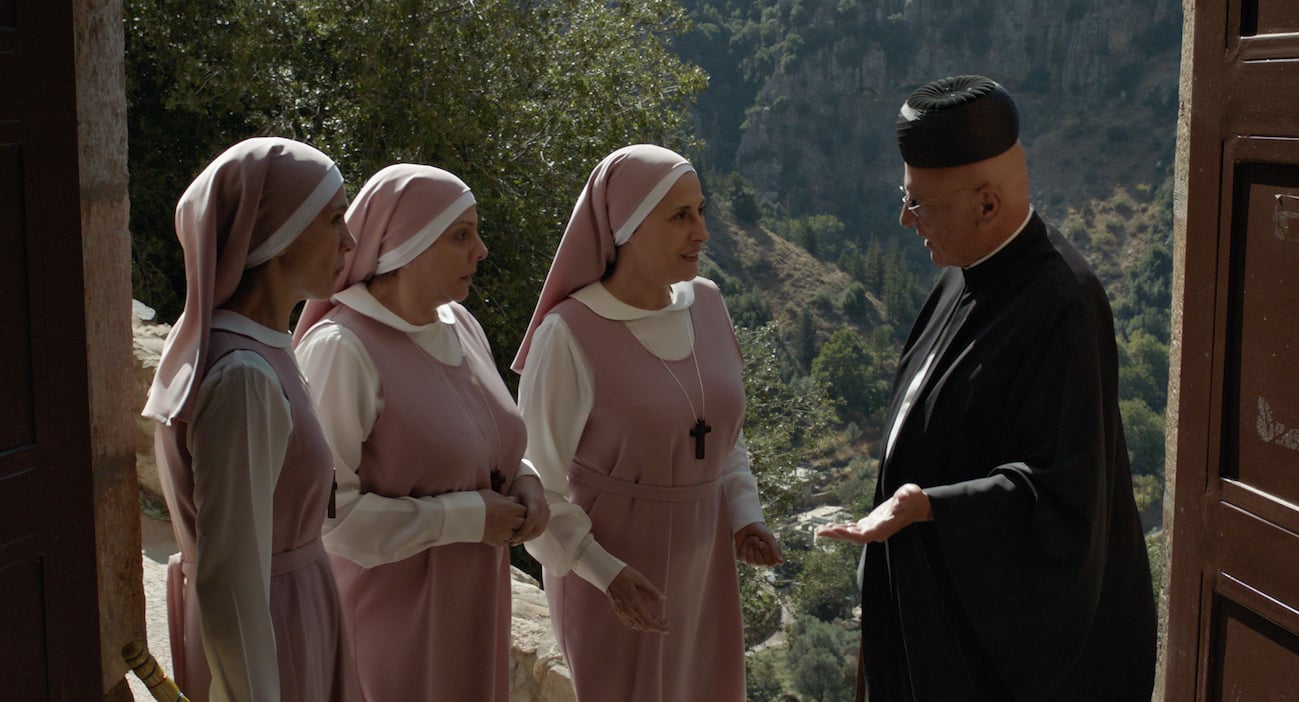 “Celine’s character was written to support [Hadi Najm]. She didn’t have any character of their own, so I wanted to add a few small things about the society we’re living in, especially the financial system, and how it’s killing our humanity ... I wanted to add a few things about how [agriculturalists] are suffering, for instance, to give the story some sociological context, while keeping all of the rest.

“We also had to add some things to balance the nuns’ role. One nun [Sister Marie-Bernard, played by Betty Taoutel] was all over the place, while the other three were less present. Julia [Kassar] had her own presence. For [Sister Celestine, played by Cynthia Karam and Sister Gaby, played by Myrna Moukarzel], the idea was that they changed the young man, but that his presence at the monastery changed them a little bit as well.”

Like so many of Lebanese features released in the past few years, the Rome shoot was ensnared in the country’s various crises and the COVID pandemic.

“The 2019 revolution and all those events happened. Before Aug. 4, we were thinking, ‘Well, part of the financing is here, so let’s shoot.’ Then Aug. 4 happened and we decided we had to do it.

“It was a challenge because we had very little money to shoot,” she says. “At the same time, we could get away from Beirut, away from our problems, and go to the cedars for an in-house shoot with friends, with people I love.”

Designed to be a Lebanese crowd-pleaser

All Roads Lead to Rome is designed to be easily consumed by a Lebanese audience. 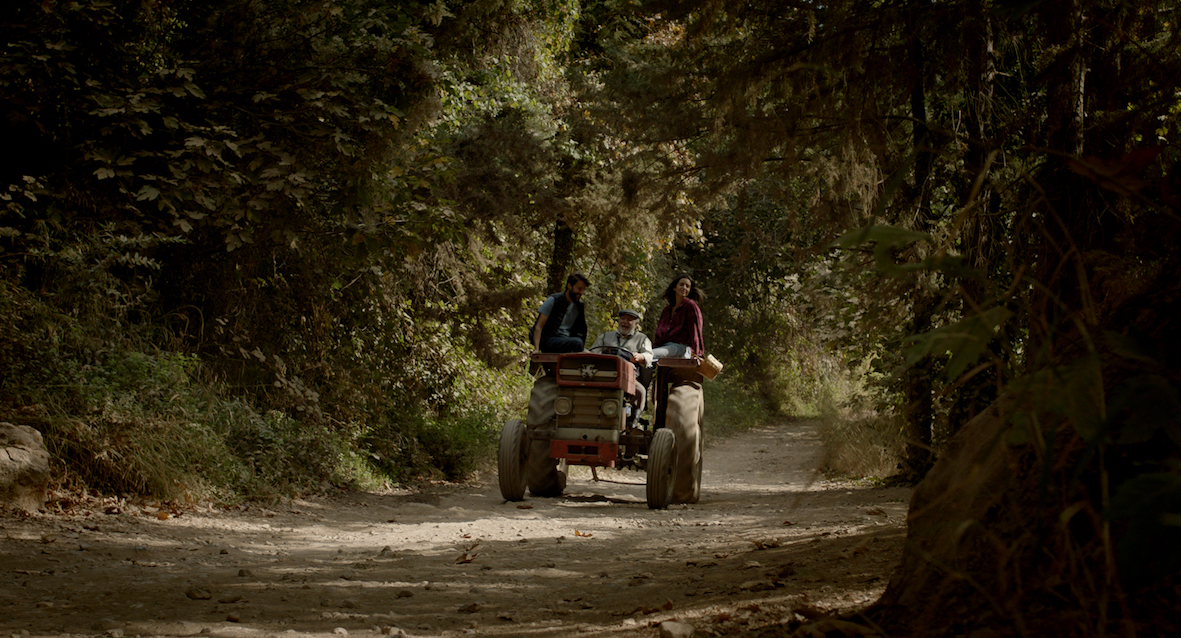 A still from “All Roads Lead to Rome.” (Courtesy of: Wakanda Films)

There’s a wealth of comic potential to be mined in a cloister of nuns and priests and the script’s sketches of Sister Paola’s small community of eccentrics are respectfully bridled. The script makes a few gentle jabs at the amateurish yet well-packaged approximations of “acting” available in local television productions — which would have its viewers believe that even married couples never kiss on the mouth — and at viewers’ inclination to too-closely associate actors with their characters.

Johnny Abi Fares’ camera work misses no opportunity to capture the rural idylls of Qadisha and its environs. The film boasts a surfeit of drone footage. So frequently does the story pause to share a drone’s-lens view of light and cloud caressing North Lebanon’s hills and wadis, in fact, that Rome does a service to the country’s ministry of tourism — which presumably did nothing to help fund the production.

Elie Maalouf’s (apparently debut) score is highly illustrative, pulling viewers’ eyes away from their smartphones long enough to enjoy a joke or two, nudging them to look up and enjoy a bird’s-eye view of low-lying clouds tumbling through the valleys of the north Lebanon uplands.

“This film is really not made for critics or festivals,” Saba says. “I knew this from the very beginning, so I was surprised to have the film’s world premiere at the Red Sea Film Festival.

“When I hear people saying, ‘We hate Lebanon. We don’t want to be here anymore. We want to leave at any price,’” she pauses. “I have another nationality and I’ll never leave, though I know that my daughters probably would leave. [This film] was a way to tell people that there are still beautiful things in this country.” 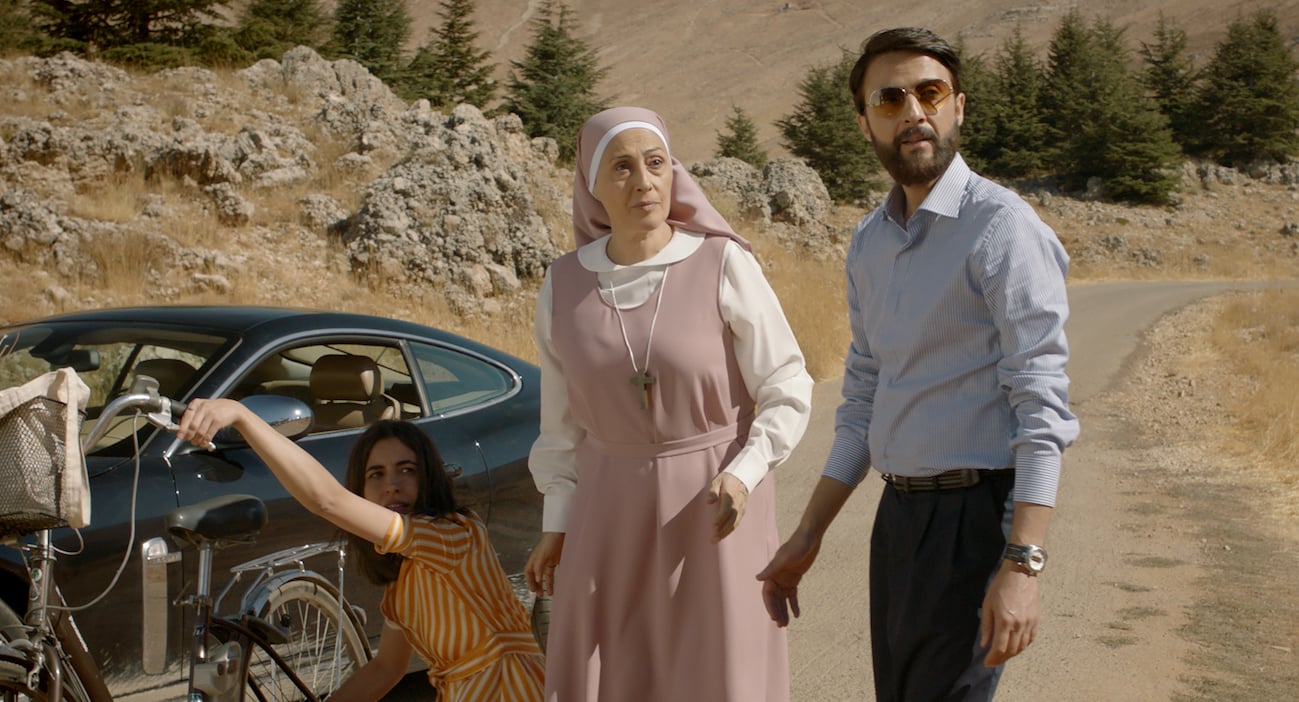 Ruba Zaarour, left, Julia Kassar and Chadi Haddad in a still from "All Roads Lead to Rome." (Courtesy of: Wakanda Films)

Saba says most of the people in her Red Sea audience were Lebanese and Saudi.

“Some Lebanese people came out of the film saying ‘You reconciled us with Lebanon,’” she smiles. “Some Saudi people told us how their fond memories of Lebanon returned while watching the film.”

The script for Rome passed through the usual review process with the state censorship board. In cases where a script touches on religious matters, that means seeking the approval of any potentially offended authority, here the Maronite church. So Saba was surprised to learn that there is an online campaign calling for Rome to be boycotted.

“A priest saw the film’s trailer and decided, ‘That’s an insult to Christianity and to the nuns and blah blah, blah.’ He didn’t see the film,” Saba pauses. “When Mayyas won America’s Got Talent, he was the priest who started a campaign saying that they are Satanic. The church official above him, who is coming to the premiere, told us ‘Don’t even mention him. Don’t talk about him. Don’t give him any importance.’

“But people are following him,” she adds. “His video has been shared a lot, and you find all sorts of comments from people who haven’t seen the film.”

The version of Lebanon depicted in Rome is a marked departure from Saba’s 2012 collaboration with Araqji (as are some of the features that Araqji went on to write after Blind Intersections, notably her ensemble romantic comedies Yalla 3a2belkon and Yalla 3a2belkon Chabeb). 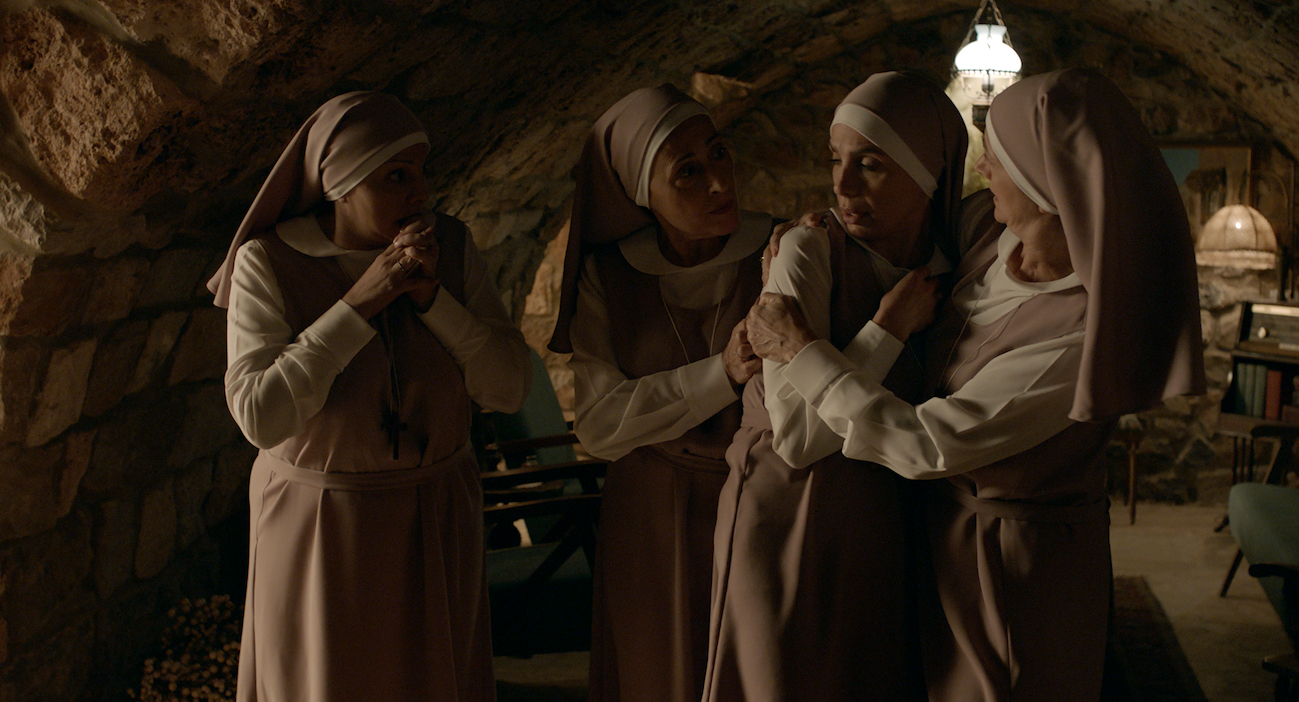 A still from “All Roads Lead to Rome.” (Courtesy of: Wakanda Films)

Saba says that, aside from ads and commercial docs, her creative energies since 2012 have been dedicated to another project, a political thriller.

“It’s set in Beirut in the ’90s,” she says. “It’s about two women looking for a disappeared poet and the many things that happen along the way. While Beirut was being reconstructed, the whole country was booming and everything was going great economically, but underneath horrible things were happening. Throughout the film the protagonists are balancing on a ledge, between believing that these terrible things are happening and believing that things are as great as everyone claimed. The audience is balancing on this ledge with the protagonist.

“For me, what’s happening in Lebanon right now is all rooted in the ’90s … All the corruption that we have in the country, the complete lack of accountability. The people that filled the institutions who collaborated with an occupier, the people who took orders from an occupier, they cannot be good for a country.”

BEIRUT — Lara Saba’s second feature is not a Christmas movie. That said, All Roads Lead to Rome, opening Thursday, Dec. 15, might easily be viewed as a light-hearted offering to a citizenry weighed down by years of crises — not least those inclined to celebrate Christmas.The film is told from the perspective of Hadi Najm (Chadi Haddad), an actor much loved by the melodrama-absorbed segment...