Is life in Lebanon still cheaper than before the crisis for those who have ‘fresh dollars’?

While a salary in "fresh dollars" in September 2020 was worth 2.2 times what it was worth a year earlier, the gap has since narrowed to 1.6 times. 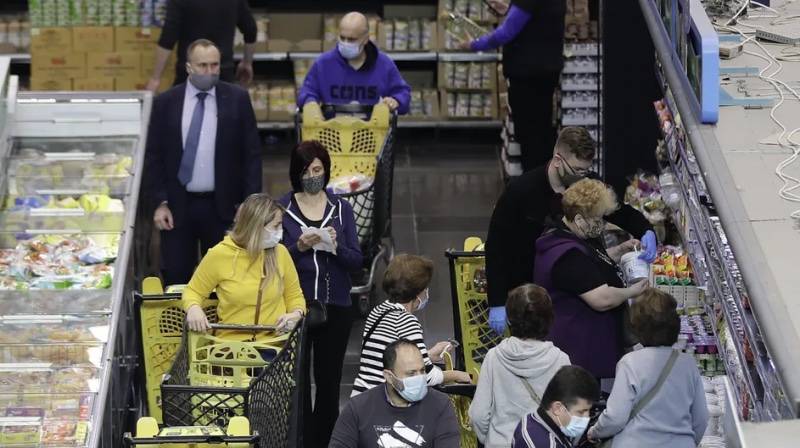 The index for food and non-alcoholic beverages has increased by 350 percent in the space of three years, representing a real price increase of 2.5 times. (Credit: Joseph Eid/AFP)

Earlier this year, a survey published by the German organization the Konrad-Adenauer-Stiftung suggested that only 13.6 percent of Lebanese have access to fresh dollars, half of them through their salaries, paid either partially or fully in foreign currency.

This portion of the population is considered privileged given that its purchasing power is preserved or has even increased since the onset of the financial crisis in Lebanon in 2019.

This was particularly true in 2020 when consumer prices were slow to keep pace with the depreciation of the Lebanese lira.

The picture, however, is more nuanced today.

Dollar earners are still privileged, but their purchasing power is increasingly inching toward where it was pre-crisis.

Two years ago, they could afford some luxuries they could not have before. Today, however, they find themselves once again conscious of the prices of some goods.

In order to offer a clearer image of the current situation, L’Orient-Le Jour analyzed the figures published by the Central Administration of Statistics (CAS) considering the lira-dollar exchange rate on the parallel market to obtain a price trend in real value.

At first glance, it appears that in September 2020, the purchasing power of a dollar earner in Lebanon on a stable monthly income had increased 2.2 times compared to September 2019. In September 2022, this same income was worth only 1.6 times what it was three years ago.

On closer inspection, the conclusions are more nuanced. 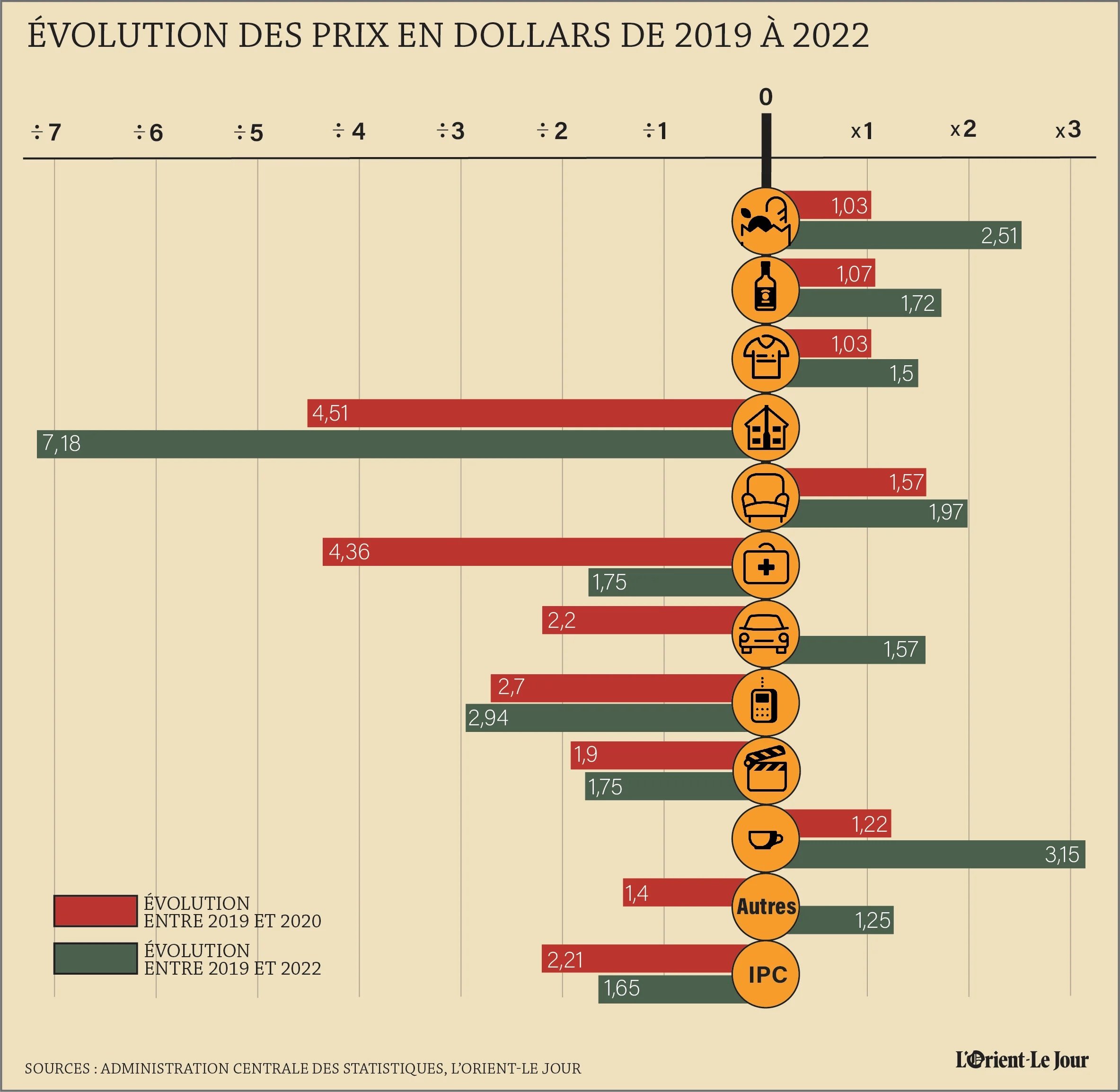 Evolution of prices in dollars from 2019 to 2022. (Sources: Central Administration of Statistics, L’Orient-Le Jour)

In 2020, dollar earners benefited from a sharp increase in their purchasing power.

Based on CAS figures and comparing the evolution of price indexes between September 2019 and September 2020, it appears that prices for imported products, notably food, alcoholic and non-alcoholic beverages, and clothing baskets, have remained almost constant in real terms (taking into account the depreciation in the lira’s value against the dollar); prices increased only marginally.

In September 2020, education in dollar terms cost 20 percent of its value a year earlier; health care, just below 23 percent; telecommunications, 37 percent; and transportation and recreation, 45 and 53 percent respectively.

It should also be noted that until September 2020, gas and fuel oil imports were still largely subsidized by the Banque du Liban, minimizing the impact of the national currency’s depreciation. This meant the price of 20 liters of 95-octane gasoline was effectively 20 percent less than a year earlier, while the price of a kilowatt-hour charged by private generator owners was 30 percent less.

Taking these parameters into account, as well as the September price index over these two years, it is, therefore, possible to say that the cost of living fell by half between 2019 and 2020 for a person whose dollar-denominated salary remained unchanged over the same period.

Over time, however, this advantage to the privileged few has gradually eroded.

“The rise in dollar prices over the past six months has eaten away at the advantage enjoyed by those who are paid in foreign currency but live in Lebanon,” Zouhair Berro, president of the Consumer Protection Association, told L’Orient-Le Jour. “They are now in a similar situation to before the crisis.”

While tax ratios have not changed (pending the entry into force of the 2022 budget, which could be a game changer), prices in Lebanon have indeed suffered the effect of global inflation, particularly driven by the explosion of fuel prices and the disruption of supply chains during the COVID-19 pandemic.

The findings derived from the CAS figures are stark.

While the price indices for food, alcoholic and non-alcoholic beverages, as well clothing were almost identical on the ground in September 2019 and September 2020, those for September 2022 exploded.

The index for food and non-alcoholic beverages increased by 350 percent, representing a 2.5-fold increase in prices over three years.

The index for alcoholic beverages and tobacco rose by 171 percent, while the index for clothing increased by 150 percent.

But the most pronounced increase concerns the price index in restaurants and hotels, up by 415 percent, a 3.15-fold increase in prices.

Contacted by L’Orient-Le Jour, Tony Ramy, the president of the syndicate of restaurant, nightclub, and coffee shop owners in Lebanon, denied this figure, stating that it does not reflect the reality of the field.

According to him, the prices charged in cafes and restaurants are now “between 50 and 75 percent of their value in 2019, while only bars and nightclubs show rates equivalent to those of 2019.”

This upward trend in dollar prices has affected fields that had remained fairly stable until 2020.

Several factors are to be considered, including “the increase in the private generator bill, driven by the higher diesel prices and the lifting of subsidies, as well as the increase in telecom rates since July 1,” Berro explained, adding, “These factors have dented the comfort of dollar earners.”

According to CAS figures, real transportation prices had increased 1.6 times by September 2022 compared to the same month in 2019, while the price per kilowatt hour charged by private generator owners is now 1.7 times higher than it was three years ago.

As for health care, although it is no more expensive than it was before, it weighs more on the wallets of the Lebanese in 2022 than it did in 2020.

While in 2022 health care prices were worth only about 23 percent of their value in 2019, they now represent 57 percent of that value — an increase caused by the lifting of subsidies on the vast majority of medicines.

For education, this is mostly related to the fact that public schools and universities cannot increase their tuition fees without a decision by public authorities. The private sector is raising prices gradually.

The situation is a little more complex for housing, as some residents still benefit from the old lease system. A law to liberalize the system was finally approved by Parliament in 2017; it provides for an adjustment process extending over nine years.

While the price of normal rents in Lebanese lira has risen sharply due to the national currency depreciation, the real value of rents is still falling, although some landlords are demanding to be paid in dollars.

“In Beirut, rent prices in lira have risen because of the depreciation, but those in dollars have fallen by 30 to 50 percent. We can now find property at prices unimaginable before the crisis,” Guillaume Boudisseau, consultant for the real estate consultancy Ramco, told L’Orient-Le Jour.

The CAS index reflects a 3.4-fold increase in rents in Lebanese lira in three years.

“The index measuring rents is based on a sample of people polled every six months and distributed throughout the territory. The index value reflects an average in prices," Alissar Nasser, a member of the CAS, told L’Orient-Le Jour.

“If the average is so low, it probably means that prices have not changed in some remote areas where demand is low, which offsets the variations seen in areas where rents have increased,” she added.

Earlier this year, a survey published by the German organization the Konrad-Adenauer-Stiftung suggested that only 13.6 percent of Lebanese have access to fresh dollars, half of them through their salaries, paid either partially or fully in foreign currency.This portion of the population is considered privileged given that its purchasing power is preserved or has even increased since the onset of...