Sun, shadow and conversation at the ‘Fortress of Tranquility’ 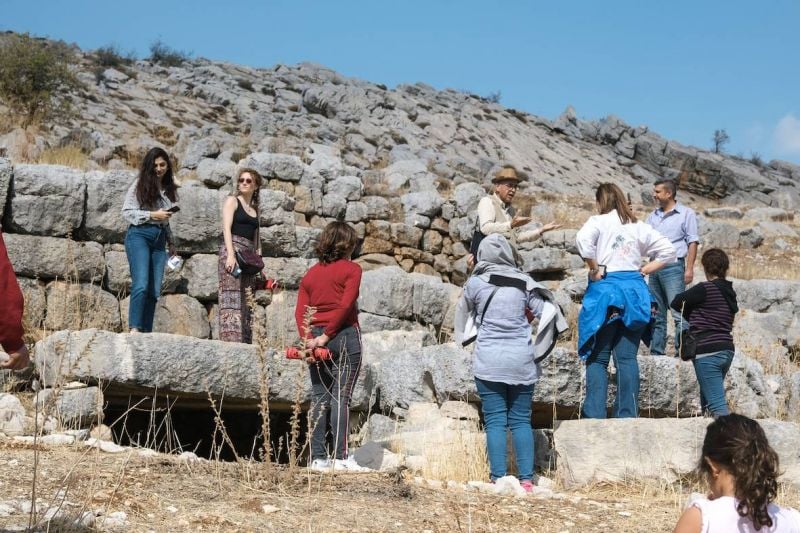 HOSN NIHA, Bekaa Valley — “It is so quiet here, you cannot hear a sound. Your mobile won’t work. You’re disconnected from the world.” Curator Nour Osseiran smiles placidly as she speaks. “It’s really a site of tranquility, but there’s a charged atmosphere also.”

Osseiran works with Temporary Art Platform. Founded in Lebanon in 2014 by curator Amanda Abi Khalil, and registered in France in 2020, TAP is a nonprofit that commissions contemporary artists to devise and install ephemeral public art projects with an eye on social change.

Located about eight kilometers north of Zahle, Niha takes its name from a Syriac word for “calm.” It shares this name with the limestone wadi, or canyon, that shelters it, and a few other towns thought to embody serenity.

Near the top of Wadi Niha sprawls Hosn Niha, the remains of a long-lived, long-abandoned, Greco-Roman settlement. As of 2011, archaeologists could say precious little about the people who once inhabited the site’s ruined households, but its large temple — one of four sanctuaries erected here between the first and third centuries CE — is said to have been the community’s cultic center.

The monumental limestone temple (archaeologists have given it the fairytale name “HN051”) is in a gorgeous state of disrepair, having been wrecked by the earthquake that flattened Roman Berytus in 551. Though some of its mammoth stones were later rearranged — first to build a Byzantine church, later to retool the sanctuary as a fort (hosn) — the structure’s tumble of limestone slabs reiterate the surrounding landscape, whose theatrical stone folds betray the slow-motion geological writhing beneath the site. 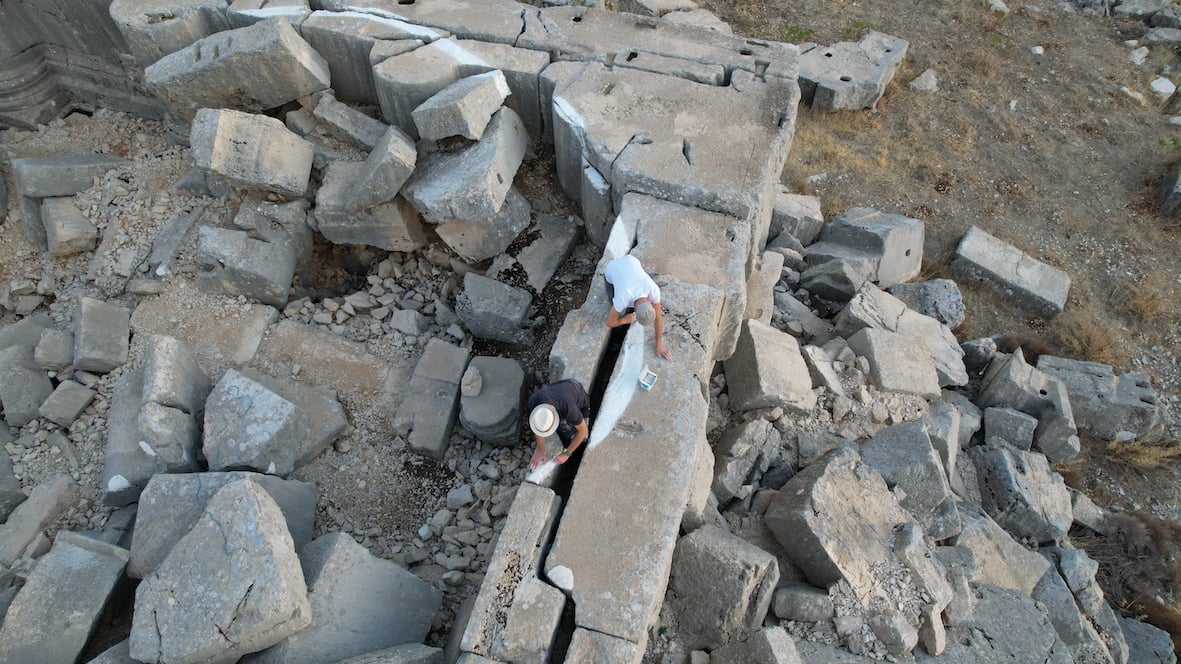 On the final day of the event, TAP has staged an afternoon of artist-led tours of the onsite work. In the early evening, several visitors from Beirut watch a pair of short videos projected as part of the event’s public program.

Osseiran says TAP asked the artists to interrogate some of the incongruities of a site renowned for its dead calm, formed over centuries of tectonic and human violence — looting as well as conquest and civil war.

“When you look at its history, you understand the violence underlying how it came to be what it is today,” she tells L’Orient Today, “so we invited the artists to come and reflect on archaeological monuments, their ruin, and the state of waiting they’re in. The artists responded beautifully, each in their own way.”

One of the artists on hand to present their work is Caline Aoun, whose practice sometimes engages with the transient relationship between technology and the natural world. The primary elements of “Presences from the Sun,” her piece at Hosn Niha, are sun and stone, mirrors and text.

'In Fields of Words': Samar Yazbek and crafting a cinematic language for Syria’s tragedy

A series of 10 plaques are situated around the ruined temple, each inscribed with historic epigrams that address the passage of time. The plaques themselves are difficult to read, since the letters have been stamped out of the surface in reverse, revealing a mirror beneath. As the sun reaches the stages of its daily ascent, its rays reflect off each of the plaques’ mirrors, projecting a witticism upon the temple stones.

“Destruction, hence, like creation, is one of nature’s mandates,” reads a line from the Marquis de Sade.

On another plaque, Emily Dickinson observes how, “When it comes, the landscape listens, shadows hold their breath.”

“The ruins proclaim the building was beautiful,” declares Mohsin Hamad.

“For the eyes that have dwelt on the past,” muses George Eliot, “there is no thorough repair.” 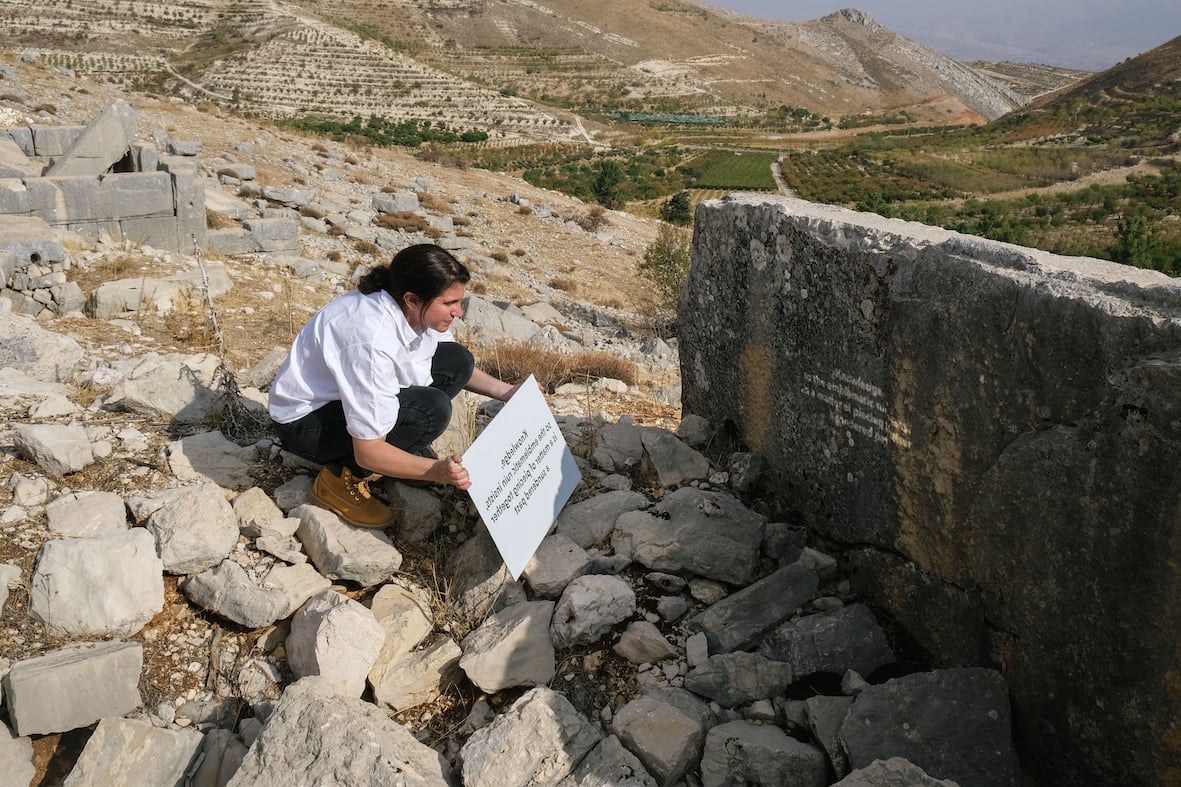 Caline Aoun during the installation of her work ‘Presences from the Sun,’ staged around the Hosn Niha site, October, 2022. (Credit: Michèle Imad)

“When I first came to visit the site, I was completely drawn by the relationship between sunlight and architecture,” Aoun tells a cluster of visitors from Beirut. “For centuries faith has dictated the treatment of light and the sacred setting in religious architecture.

“When you look at churches,” she says, “light is carefully made to veer downward, as if to say that god is light that comes from above. In temples, the statue of the god would usually be kept in the space furthest from the entrance, enclosed in holy darkness. Only the priests had the right to go in there. [Archaeologist] Jean Yasmine tells us that once a year the sun would be in a position to illuminate the statue of Hosn Niha’s temple — a way to mark the birthday of that particular god.”

The artist gestures around her. “This site can no longer enclose any darkness. It’s in a state of complete destruction, completely open to light. There is no roof. There is no interior. What you’re left with are the strong shadows that the sun casts all day. I immediately thought of a sundial as a way for this work to evoke the passage of time, cycles, rhythms, the sun and the site.”

“Scratch the Surface” is the most recent in a series of art projects carried out under the aegis of Art and Territory, a collaboration between Lebanon’s Directorate-General of Antiquities (DGA) and the French Institute in Lebanon (IF), whose object has been to reactivate dormant archaeological sites.

The DGA issued an open call to artists and art institutions to apply with projects that would use these sites as touchstones for public art interventions. Other Art and Territory projects include Alfred Tarazi’s “Hymne a l’Amour,” mounted before the National Museum on Oct. 28-30, Charbel Samuel Aoun’s “An Archaeology of Touch,” staged in Jbeil’s archaeological site, September to October 2022 and Art Design Lebanon’s “Lost In The Right Direction,” at Beit Meri’s Deir al-Qalaa ruins, Dec. 2021 - Jan. 2022.

“Scratch the Surface” is somewhat unlike TAP’s previous public interventions in that it didn’t grow from onsite artist residencies, but Osseiran stresses that TAP retained its grassroots contacts with the host community.

“We didn’t ask artists to come and spend time here,” she acknowledges. “We don’t have the space and Niha is not equipped for that. We have this small apartment that was generously gifted to us for as long as we wanted. Since the summer, artists came and stayed here, going back and forth to Beirut, but they really have been engaged.

“We are not interested in doing a guerrilla art intervention for two days and then disappearing,” she declares. “Jad [Karam] and I have been coming up to Niha for a year now, asking questions about the community’s relationship with the site, which obviously belongs to them. They were so generous and seemed to enjoy people asking questions, rather than coming in and imposing preconceived narratives of what the site actually means to them. The project is a response to the site itself.” 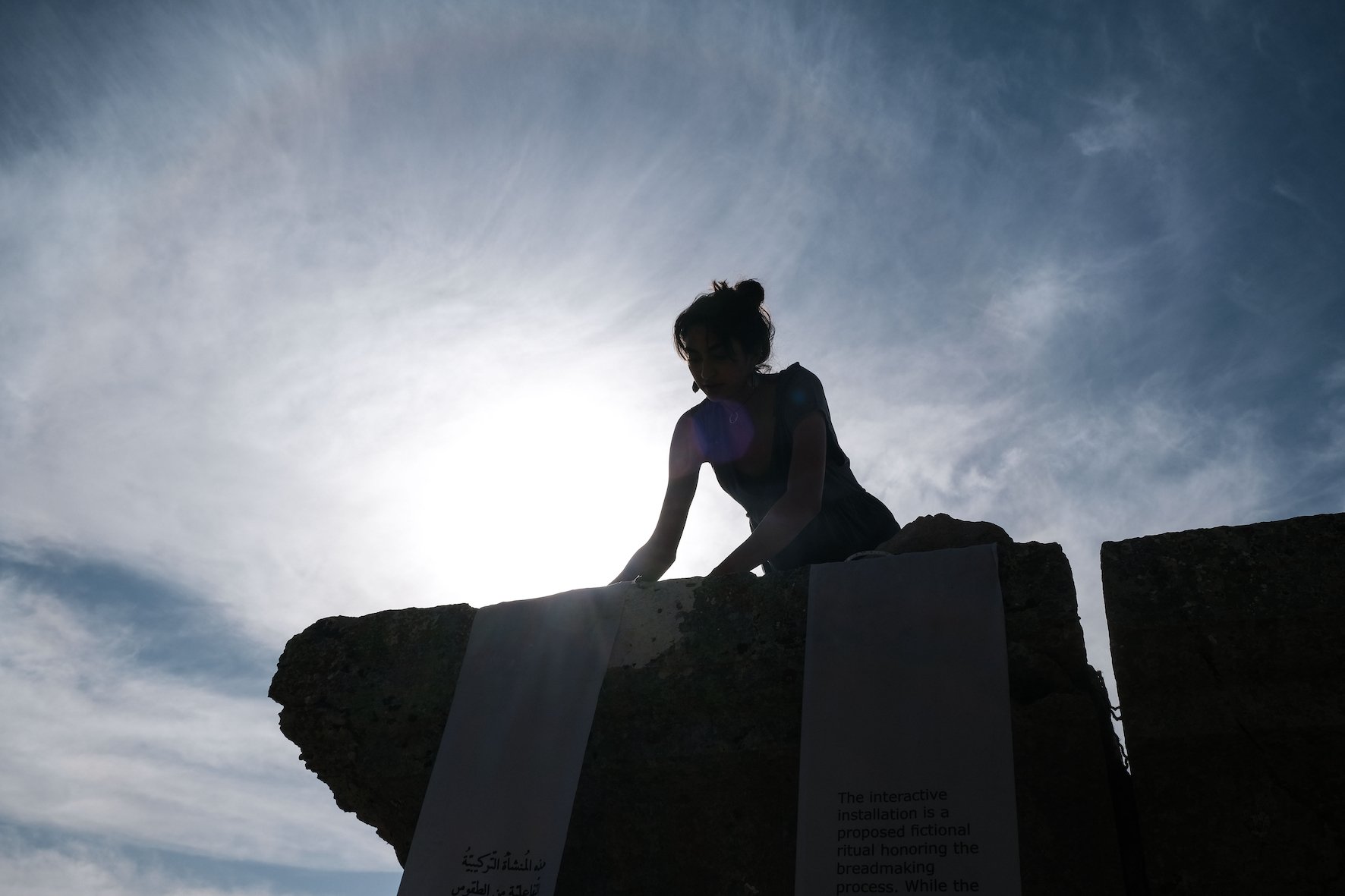 Among the issues common to heritage conservation efforts worldwide is that local communities may inherit architectural and archaeological sites but have not been educated about their worth and so may not exercise stewardship over them, allowing them to be neglected or destroyed.

Niha is an exception. Osseiran says community members have been active in safeguarding the temple sites adjacent the municipality since before the DGA was able to administer the sites, and the directorate employs several Niha residents as caretakers. Jean Yasmine, who wrote a Ph.D thesis on Hosn Niha, was a generous resource to artists trying to penetrate the site’s many layers of history.

Village residents’ strong sense of custodianship over Hosn Niha played an unexpected role in the completion of some of the artists’ commissions.

“HN51 [48 circles],” the project of art historian and artist Gregory Buchakjian proposes a spatial-historical relationship between the monument of Hosn Niha’s temple and what he terms “the current and bound-to-disappear monument at the port of Beirut: the grain silos.”

Buchakjian envisioned the work as a performance, in which he would use chalk to draw a series of 48 circles, within which he’d inscribe the plan of the silos (1:1 scale) upon the temple stones.

“We were here on site on Thursday,” Osseiran recalls. “Gregory started with the chalk and had a drone film the work from above. You can see the chalk isn’t really visible. Gregory called me. ‘The chalk isn’t looking right.’”

Later, photographer Ieva Saudargaité suggested that Buchakjian use chalk in a different form — crushed limestone mixed with water (“slaked lime” or “hydrated lime”) and applied with a brush, like paint.

“The whole premise of these works is their ephemerality,” Osseiran says. “The works disappear with time, with nature, so they don’t damage the site in any way. Chalk was proposed as a material because of its biodegradability. It washes away with the first rain.

“Gregory got the [hydrated lime] preparation and tried it here in front of the house, to make sure that it would wash away. Then we tried it on site, on a piece of rock on the ground. We were sure that it would wash away with the first rain. On Friday morning, the artists are installing their works. Gregory is continuing with his first circle, using this brush and the slaked lime that he’d prepared and it’s going beautifully.

“Someone from the DGA, a Niha resident who is a caretaker for the site, arrived and started —” Osseiran pauses. “Screaming, ‘You’re not allowed to do this!’ ‘You must stop now!’”

Buchakjian stopped working after his first circle. Heated discussions ensued as to whether any of the artists’ works could be installed since, as DGA representatives saw things, none of them were supposed to touch the stones and none were meant to be staged within the temple itself.

By Saturday, Oct. 29, calm had returned to Hosn Niha.

The DGA representatives agreed that shouting was not the ideal way to communicate their concerns with artists and an art institution whose aims are completely in sync with those of the village and the DGA.

“We told the people in charge, ‘The work will be removed.’ We awoke today to do that and found that all traces of Gregory’s work had been erased already. They removed it for us. They were there very very early.”

Briefly, a wall of Hosn Niha has been illuminated with an observation of Theodor Adorno, that “no recollection is possible any more, save by way of perdition: eternity appears, not as such, but diffracted through the most perishable.”

HOSN NIHA, Bekaa Valley — “It is so quiet here, you cannot hear a sound. Your mobile won’t work. You’re disconnected from the world.” Curator Nour Osseiran smiles placidly as she speaks. “It’s really a site of tranquility, but there’s a charged atmosphere also.”Osseiran works with Temporary Art Platform. Founded in Lebanon in 2014 by curator Amanda Abi Khalil, and registered in...