Once a stigmatized dance form, ‘raqs sharqi’ makes a comeback in Lebanon 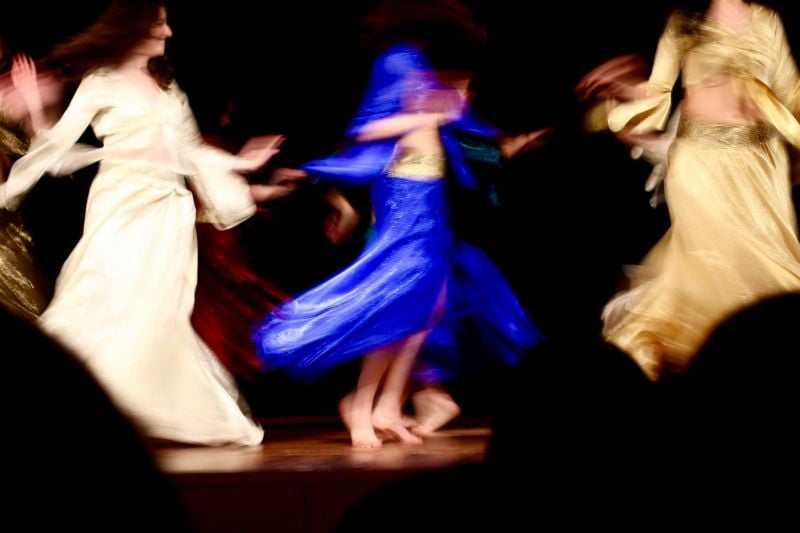 BEIRUT — A hip up, a swirl and an accent on the head roll. Up, down, up and down to the sound of the derbake, followed by a drop to the floor while twirling two golden canes.

Marianela started her show at Dar Beirut, a Lebanese restaurant in Beirut’s Gemmayzeh neighborhood, where she performs her raqs sharqi (“Oriental dance”) routines twice a week, with a rhythmic entrance. As she twirled, shook her hips, and undulated her torso through the tables, customers clapped, filmed and even tried a dance move or two to accompany her.

“I want them to enjoy their time while watching the performance. I think my mission is to make people happy,” she explained before her show. She preferred to go by her first name only, which she also uses as her stage name. The Argentinian-Lebanese dancer studied raqs sharqi in Argentina, before taking the leap and moving to Lebanon six years ago.

Pop culture rarely shows the nuances, layers and complexities of this kind of dance, practiced in North Africa, the Levant and the Gulf and known by a slew of different names. But the recent triumph of the Lebanese dance group “Mayyas” at America’s Got Talent has given raqs sharqi a needed spotlight.

Researchers currently associate the origin of this dance with Egypt. It was used to worship the Nile for its lushness, as well as the gods of fertility. Countries across the Arab world share similarities in this type of dance, though each place may have call it by its own name.

Still, the different dances share a common stigma. In April this year, an Egyptian court jailed two singers for “violating family values” after posting a video with a Brazilian sharqi dancer.

The courage to be yourself: LGBTQ+ voices emerge from the shadows

In Beirut, Brazilian-Lebanese dancer Naima Yazbeck said she faced stigma when she moved to Lebanon 15 years ago to reconnect with her heritage. “I was embarrassed to tell people I make a living out of dancing,” she said, “because some people can think I’m a prostitute.”

Considered a form of entertainment, raqs sharqi is often dismissed and excluded from the cultural heritage that gets passed down.

For Lebanese sharqi dancer and performer Mohamad al-Khansa, known by his stage name Khansa, dance should be part of the educational curriculum, a way to learn about heritage.

As it currently stands, “the educational system in Lebanon is toxic, [including] in dance,” he explained.

“I really hope to see this form of dance or any art related to our culture, may it be the music or dance, included in school education properly.” 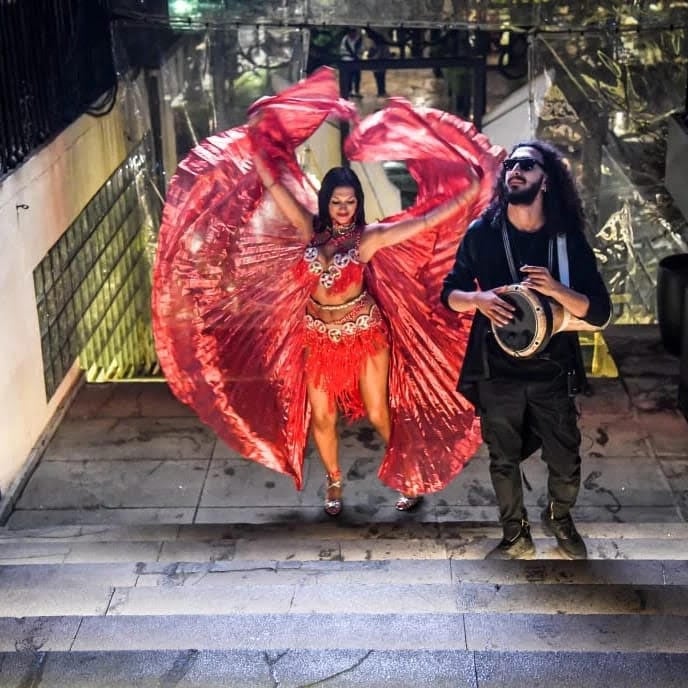 A dance by many names

Beyond a misconception about the craft, the terms used to describe raqs sharqi are often subject to debate.

In a UNESCO-led conference last month about the terminology of dance, legendary Lebanese dancer Amani spoke about how necessary it is to use the appropriate terms to define raqs sharqi.

“Belly dance is the most widespread name, even amongst the professionals,” she said, “but when we say belly, we think of the tummy, the food … the dietitian. Where is the beautiful image, the aesthetic, the identity? It degrades and disgraces the dance and the dancer.”

Baladi dance, Lebanese dance, belly dance. The names can quickly get very confusing for the next generations, admitted Amani.

But the terminology of the dance does impact its perception by the public. “Raqs sharqi is the most used term,” she explained. “This is due to films, ads, magazines — even amongst societies in all Arabic countries, they refer to it as raqs sharqi.”

The sounds of home: A conversation with Beirut indie rocker Julia Sabra of Postcards

In a society that views the word raqqasa — which literally translates to “female dancer”— as derogatory, there are few spaces for this art to flourish.

“Women dance for themselves, at home or at parties,” explained Yazbeck, “but they have issues with [the dance as a] profession, because of the society, religion, or maybe their husbands.”

In the 1990s, she added, “there were legendary dancers such as Amani and Samara — they were remarkable. They had an artistic approach. They danced at events and festivals. They were respected as artists.”

But only a few years later, perception of the dance reached a low point, “where dancers were seen either to get money or attract men who came to visit from the Gulf,” said Yazbeck. “It was more entertainment than artistic, but it’s changing now.” 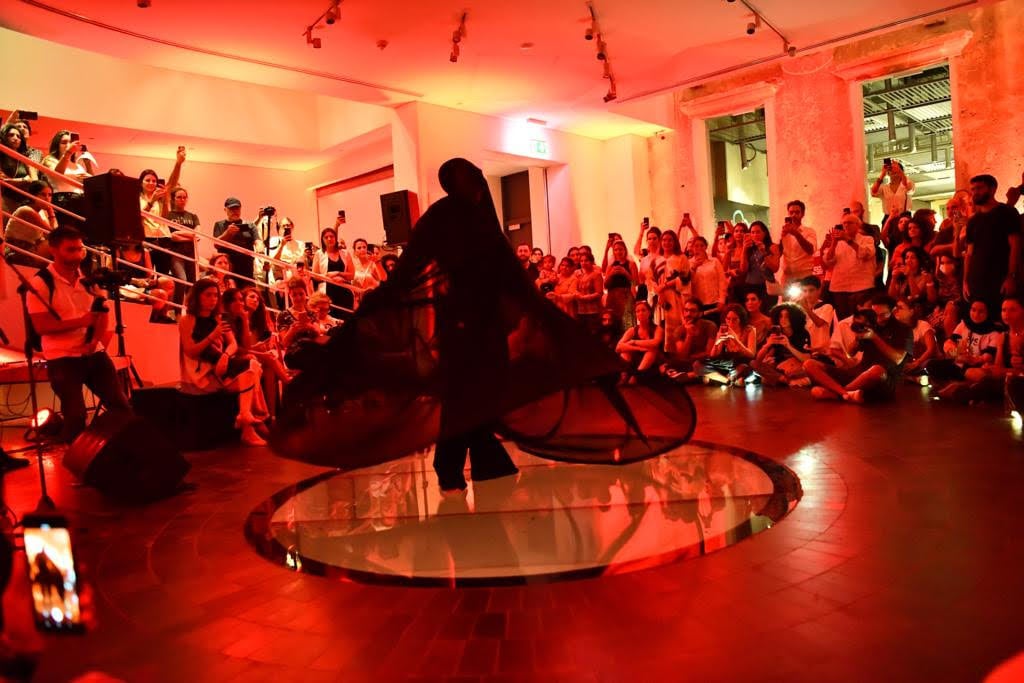 ‘People don’t treat it as an art’

Beyond the foundational moves and choreographies, the layers and variations in style, rhythm, and aesthetics differentiate one type of raqs sharqi from the other.

“In Oriental [dance] you have to do taksim, tarrab drum solo, saidi, dabke, there are a lot of different styles,” explained Marianela.

“You can do it the vintage way, or golden-age style,” she added, in reference to the era of Egyptian cinema classics that blossomed in the 1940s, 50s and 60s.

“The more you dig in, the more you need to learn,” Marianela said. “You have to study old music, new music, you need to know about rhythm, about the tempos. Some people don’t know it takes so much, they don’t know how hard it is. They don’t give it the value it has and don’t treat it as an art in itself.”

The technicalities of the movement and choreographies are only part of the dance.

Professional sharqi dancers must create a symbiosis with the music, know how to put together a playlist, or coordinate with the band to come up with a show. They spend considerable money on classes to keep learning new skills and buy the outfits and accessories they need to provide the spectators with a performance.

Passing down the knowledge

One of the posts shows extracts from the 1963 movie “Lebanon at night” by Mohamad Salman, featuring Egyptian dancer Nagwa Fouad dancing in a hot pink beaded bra, a tasseled skirt, and flowy shale, amongst a band playing in front of a video of the Lebanese coast.

“I started the account during COVID,” explained the person behind the Instagram account, who wished to stay anonymous as they don’t enjoy public exposure. “I just wanted to have a space that brought just simple joy and a sense of community. I think that’s the beauty of many dances from the region, in the sense that they are social, and they take place at happy events.”

As a rising star of raqs sharqi, both in Lebanon and abroad, Khansa has taken it upon himself to pass on his knowledge, passion and craft to students.

“What I’m seeing when I teach, is the older generation coming and craving this information, this part of their heritage,” he said. “The younger generation is still discovering it, but they look at it and they appreciate it.”

Back in 2016, the American University of Beirut saw its first “Belly Dance Club” come to life. Andrea Fahed, one of its former members and presidents, continues to learn about oriental dance through workshops and classes but also has started to teach and share this passion.

“It’s easy to find an oriental dance class, but to find a class with the technique, the history, and the context, is harder,” Fahed said. She echoed Khansa’s feelings about missing a structure for passing down knowledge on an essential piece of Lebanon’s culture.

“In this region of the world,” explained Fahed, “it’s a dance that is present in our bodies, a type of dance we all [do], between friends, at weddings, at home.”

“As soon as there’s a beat, we just feel it in our bodies.”

BEIRUT — A hip up, a swirl and an accent on the head roll. Up, down, up and down to the sound of the derbake, followed by a drop to the floor while twirling two golden canes. Marianela started her show at Dar Beirut, a Lebanese restaurant in Beirut’s Gemmayzeh neighborhood, where she performs her raqs sharqi (“Oriental dance”) routines twice a week, with a rhythmic entrance. As she...