The Higher Judicial Council could not meet yesterday due to a lack of quorum and will reconvene next Tuesday. 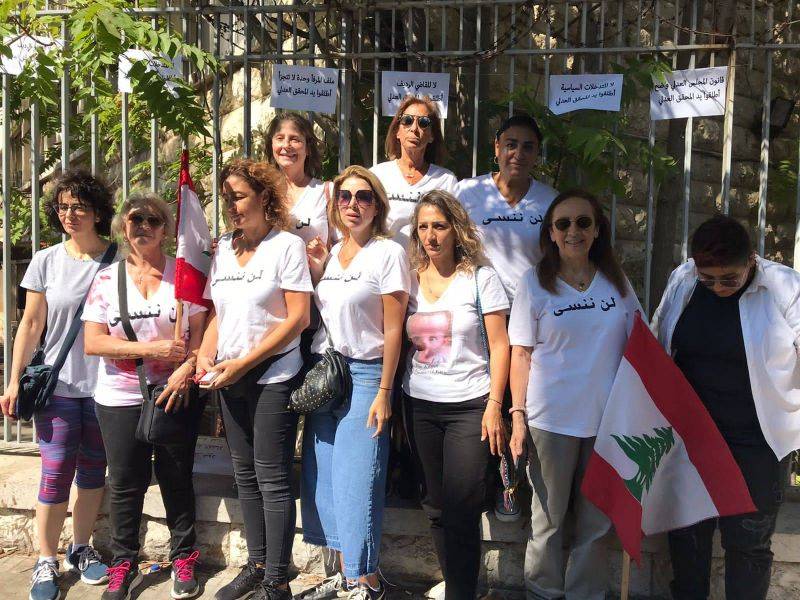 Activists from the Noun group came to support the families of the victims of the port explosion during a sit-in in front of Beirut Justice Palace on Tuesday. (Credit: DR)

Due to a lack of quorum, the Higher Judicial Council did not convene yesterday at the request of caretaker Justice Minister Henri Khoury.

The meeting was called to vote on the appointment of Judge Samaranda Nassar, known to be close to the Free Patriotic Movement, as an alternate judge to Tarek Bitar, the lead investigator in the 2020 Beirut Port explosion case.

The session, however, was postponed until next Tuesday.

On Monday, Higher Judicial Council President Souheil Abboud announced that he was boycotting the session, denouncing “political interferences” in the blast probe and arguing that the convening of the council to vote for a substitute judge is politically motivated.

According to the FPM, it is necessary to appoint an alternate magistrate to Bitar to decide on the issue of the detainees who were arrested in the context of the port explosion investigation and remain in custody.

Nassar’s name was proposed by Khoury, who is also close to the FPM, ostensibly to rule on detainee release requests in the case, namely the release of former Customs Director Badri Daher, who is also reputed to be close to FPM leader Gebran Bassil.

Until 11 a.m. Tuesday, the scheduled time of the meeting, it was uncertain whether quorum would be met or not, despite Abboud’s absence.

It was sufficient for the country’s chief prosecutor, Ghassan Oueidat, to attend the session to ensure the quorum. But he did not show up.

Oueidat has previously announced that he would distance himself from the port probe because of his kinship with Amal MP Ghazi Zeaiter, a former transport minister, who is implicated in the case.

Had Oueidat decided to attend the Higher Judicial Council meeting, the FPM would have won the battle against Abboud. The chief prosecutor, however, contented himself with participating in the discussions of the first item on Khoury’s agenda, i.e., the appointment of members to the plenary assembly of the Court of Cassation.

“Oueidat is being consistent” with the decision to recuse himself in the port probe, according to a judge who spoke to L’Orient-Le Jour on condition of anonymity.

The judge explained that according to the law, Oueidat is allowed to attend Higher Judicial Council sessions as one of the council’s members and vice-president, even though he cannot vote on issues related to the Beirut port case.

Said Malek, a constitutional expert, does not seem to concur.

“Ghassan Oueidat stepped away from the explosion case, so he cannot participate in any meeting related to it,” Malek said.

For Malek, if the Court of Cassation prosecutor did not attend the meeting, it is because the law does not allow it.

“If next Tuesday, Oueidat decides to take part in the discussions to vote on Nassar’s appointment [as a subsitute judge], any decision related to this issue would be null and void,” Malek explained.

Meanwhile, sources close to Abboud denounce the fact that the Council was convened in the absence of its president, even if it was in regard to the plenary assembly members.

“When the HJC [Higher Judicial Council] president refuses to take part in a meeting, all council members should stand in solidarity with him by refusing to participate,” Malek said.

For their part, the Higher Judicial Council members who met justified their position through a statement, saying they acted “out of duty and in accordance with the law, far from any political motives, to ensure the continuity of the work of the judiciary.”

FPM demands Abboud be referred to the Judicial Inspection

The families of the port blast victims protested outside Beirut’s Palace of Justice in support of Abboud while the Higher Judicial Council met inside the courthouse to discuss the appointment of an alternate judge.

Meanwhile, the families of detainees held in connection with the blast also staged a sit-in at the same location, to protest the postponement of a vote on a substitute judge.

In response to the session’s postponement, the FPM issued a statement yesterday evening accusing Abboud “of obstructing the course of justice” and demanding that he be referred to the Judicial Inspection for influence peddling and abuse of power.

Due to a lack of quorum, the Higher Judicial Council did not convene yesterday at the request of caretaker Justice Minister Henri Khoury.The meeting was called to vote on the appointment of Judge Samaranda Nassar, known to be close to the Free Patriotic Movement, as an alternate judge to Tarek Bitar, the lead investigator in the 2020 Beirut Port explosion case.The session, however, was...