Derian says he is "optimistic" that a new government will be formed "in the next few days." 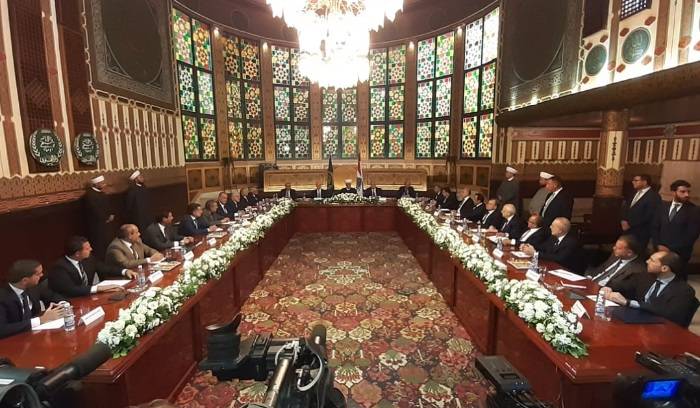 Sunni MPs gathered under the aegis of the Grand Mufti Abdel-Latif Derian in Dar al-Fatwa, on Sept. 24, 2022. (Credit: ANI)

BEIRUT — Grand Mufti Abdel-Latif Derian on Saturday pleaded, in front of the majority of Sunni MPs, for the election of a "unifying" president before the Oct. 31 electoral deadline. Derian's comments came during a meeting at Dar al-Fatwa that was boycotted by some Sunni MPs and which come almost a month before the end of the six-year term of President Michel Aoun.

Like other political parties, including Hezbollah, Derian said he is "optimistic" about the formation of a new government "in the next few days." The caretaker cabinet headed by Prime Minister-designate Najib Mikati has been managing current affairs since May 22. The delay in cabinet formation has been due to a political standoff between Mikati and Aoun that appears to have eased in recent days.

Profile of the next president

In his speech on Saturday at Dar al-Fatwa, Derian described his preferred characteristics of a new president, mentioning that "the new president must preserve the constants of Taif and the Constitution, co-existence and Lebanese, Arab and international laws. These constants cannot be violated, regardless of the differences in political opinions, because they are the guarantors of the system and the stability of the national entity."

"The new president must also put an end to the false discord and confessional quarrels concerning the prerogatives [of the Maronite president and the Sunni prime minister] and advocate a separation of powers in accordance with the Constitution," Derian said. Both Mikati and Aoun have acknowledged publicly that they have been in disagreement about whether or not the president's authority transfers to the current caretaker cabinet in the event of a presidential vacuum at the end of the incumbent's term.

The Mufti also said that the president who will be elected must "have the characteristics of a personality in the public and political sphere that is responsible and has a conscience." He also considered that this president must have "wisdom, a sense of national responsibility and honesty. He must be able to gather the Lebanese and work fully with the constitutional powers and institutions to get the country out of its crises and avoid its total collapse."

Derian also called for the election of a president "who is neither the cause of the problem nor part of it."

"We want a president we can trust," he insisted.

In this context, he urged the MPs to "contribute to change and to work so that the republic regains its role."

"You are responsible for the election of a president or his absence, whatever the reasons were," he warned.

A government 'in the coming days'

The mufti also stressed the urgency of forming a new ministerial team, while warning against "any infringement on the prerogatives of the prime minister" — a thinly veiled criticism of Aoun.

"We plead not to touch the prerogatives of the prime minister and to do everything possible to help the prime minister-designate in his mission," the mufti said. He also said that he is "optimistic" about the rapid formation of a new government in the coming days," believing that "Lebanon needs a fully empowered cabinet and not a cabinet of expediency of current affairs."

Derian's speech was followed by a private meeting with the invited MPs. At the end of that meeting, the MPs pledged to elect, "within the legal deadlines, with the rest of the Parliament, a new president who respects the Constitution and the constitutional oath out of loyalty to the Lebanese people and its interests."

The Dar al-Fatwa meeting to which the mufti invited all Sunni parliamentarians was intended "to unite the ranks of the [Sunni] community  in particular and the Lebanese in general," according to a Dar el-Fatwa spokesperson. It was followed by a dinner at the headquarters of the Saudi Embassy in Yarze. Several MPs boycotted the meeting, including the two elected members of the popular protest movement, Ibrahim Mneimneh and Halime Kaakour, as well as the independent MP Osama Saad. Others, such as Mohamed Yahya (linked to March 8), Yanal Solh and Melhem Hojeiri (elected on the joint list of Hezbollah and Amal in Baalbeck-Hermel) have suggested that they were not invited.

There is a risk of a double presidential and governmental vacancy in Lebanon, as Aoun's term expires on Oct. 31 and as yet no new government has been formed. Many observers fear that Aoun will want to hold on to his post on the pretext that a caretaker cabinet cannot exercise the prerogatives of the president, especially following his comments saying that he "will leave Baabda if the situation is normal and nobody means any ill."

In recent days, however, several political parties, including Hezbollah, through the voice of its leader Hassan Nasrallah, have said they expect a new government to be formed soon, while a vacancy in the presidency seems inevitable. On Friday, Saudi Arabia, France and the United States described the ideal profile of Aoun's successor and urged for the presidential election to take place on time.

BEIRUT — Grand Mufti Abdel-Latif Derian on Saturday pleaded, in front of the majority of Sunni MPs, for the election of a "unifying" president before the Oct. 31 electoral deadline. Derian's comments came during a meeting at Dar al-Fatwa that was boycotted by some Sunni MPs and which come almost a month before the end of the six-year term of President Michel Aoun.Like other political parties,...