While the concept of carpooling, despite multiple attempts, has never really impressed users in Lebanon, two co-founders think that the current circumstances play in their favor 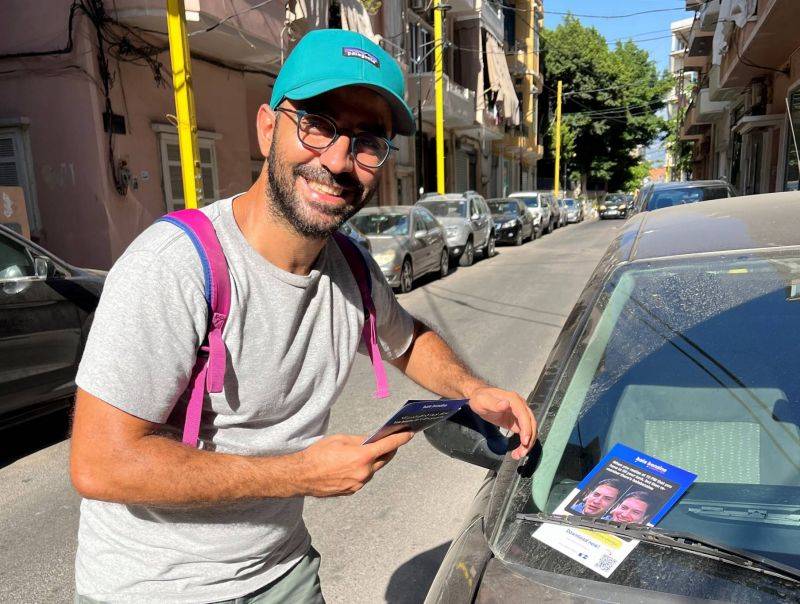 Over the weekend, Joe Achkar (photo) and Julia Khouri walked the streets of the capital to distribute flyers announcing the launch of their new carpooling application "Bala Benzine." (Courtesy of Joe Achkar)

It’s the last weekend of a sunny, but a rather windy August in Lebanon. While tourists are once again flocking the country’s beaches to get some sun before the back-to-school season, Julia Khouri and Joe Achkar are walking the streets of several Beirut neighborhoods — Clemenceau, Hamra, Gemmayzeh and Mar Mikhael — and Batroun, North Lebanon’s popular coastal city.

They are equipped with leaflets, as they hand them out to shopkeepers and people on the street, hoping to make the mobile application they co-founded, "Bala Benzine," known to as many people as possible.

Launched just a few days ago, this platform aims to bring together all drivers and passengers seeking to carpool, in a way that exceeds the few already-existing groups that are organized in some companies, on social media or instant messaging apps.

In the coming days, Khouri, Achkar and their friends will continue to campaign in other locations in the country such as Tripoli and Chekka in North Lebanon, Byblos, Beit Chabab and Bikfaya in Metn, as well as Saida and Sour in South Lebanon.

Initially scheduled for late Oct. 2021, the launch of Bala Benzine had to be postponed due to technical problems. “The platform was ready on time, but its large download size and the large amount of mobile data it consumed meant that it was not really adapted to the Lebanese market,” said Khouri.

At the time, three foreign volunteers — whom Achkar knows through his job in France — were in charge of the development and deployment of the application. Reluctant to abuse the goodwill of the volunteers working with them and given that they were not in a position to make a long-term commitment to adjust and modify the app, Khouri and Achkar decided to delay the launch.

A few weeks later, in December, they were contacted via LinkedIn by Amine Alameddine, a Lebanese developer who had recently moved to France and was willing to help them.

“As Amine knows the local market very well, his contribution was very valuable. We decided to take his advice and start from scratch to design an application with a much lighter format and less mobile data consumption,” said Achkar.

Available in three languages (Arabic, French and English), the platform already has several drivers offering places in their vehicles. In order to sign up and validate their registration, drivers must register their phone number and license plate, without forgetting to send a profile picture, for more security.

At the operational level, Bala Benzine has not abandoned its founding principles of solidarity between people and the free-use of the application, so as to play the role of an aggregator between those offering places in their cars and car seekers, optimizing the chances of putting them in touch with each other.

While the concept of carpooling, despite multiple attempts, has never really impressed users in Lebanon, the two co-founders believe that the current circumstances — soaring global fuel prices, the economic crisis in Lebanon, and the gradual lifting of gasoline subsidies — are working in their favor.

“We mainly want to target people who make the same commute to work or university almost daily,” said Khouri. “Therefore, our next step will be to reach out to large private companies, industry groups, government departments and institutions, and universities.”

“In addition to the goal of reducing gasoline and vehicles consumption on the road, we also want to offer some people the opportunity to be able to travel more regularly, while a significant part of the population has been forced to cut back on travel to reduce expenses,” said Achkar.

As for the drivers, the co-founding duo believes that carpooling would also offer several benefits: sharing costs, meeting new people and showing solidarity by offering a useful service in a country in the midst of economic collapse.

It was this feeling that led them both to embark on this project almost a year ago. Back in Lebanon to spend the holidays, “like every summer, we were shocked to see how bad the situation had become. We decided it was time to do something for Lebanon, even though we live abroad,” explained Achkar, Director of Operations with JeVeuxAider.gouv.fr, the largest French platform for volunteering.

The three of them (including Amine) carried out this goal in parallel with their work, during their free time and without any compensation.

“Sometimes entire evenings and weekends were dedicated to the development of Bala Benzine,” recalled Khouri, who is responsible for partnership development at Oracle.

To build on their success, they intend to reactivate their fundraising campaign launched last year, after which they managed to raise more than 3,300 euros.

“We didn’t take any money out of that envelope,” said Achkar, adding that instead, it would help pay for the operating costs of the app if it is quickly adopted.

As for the next step, the duo is waiting to see how the public will engage with their app before deciding. “We plan to raise funds soon by canvassing several social organizations that might be interested, with the goal of sustaining and developing Bala Benzine,” he added.

In this case, the team will recruit several people who will be in charge of following up with users, continuing to spread the word about the platform at the local level and developing new features.

But in the end, “beyond all the development and goals, what would be really cool is to hear someone on the street say that they used Bala Benzine and thought it was great, and that as a result, we made at least one person’s life easier,”Achkar said.

The application is available on www.balabenzine.app.

It’s the last weekend of a sunny, but a rather windy August in Lebanon. While tourists are once again flocking the country’s beaches to get some sun before the back-to-school season, Julia Khouri and Joe Achkar are walking the streets of several Beirut neighborhoods — Clemenceau, Hamra, Gemmayzeh and Mar Mikhael — and Batroun, North Lebanon’s popular coastal city.They are equipped...