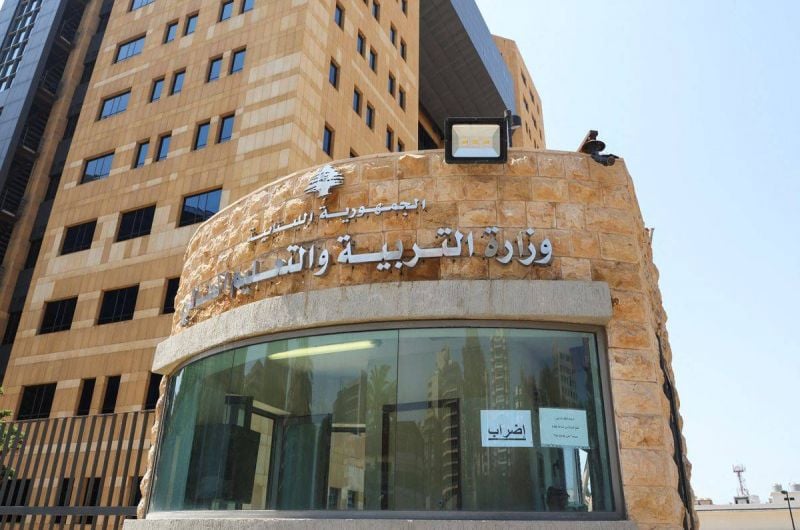 A view shows the building of the Ministry of Education and Higher Education during intermittent state workers strike in Beirut, Lebanon July 29, 2022. The writing on a paper pasted on the window of the building reads "Strike". (Credit: Mohamed Azakir/Reuters)

BEIRUT — It’s a weekday, but 50-year-old Lebanese finance ministry employee Walid Chaar is not at work and hasn’t been since June.

He rushes to water the garden at his home in the hills south of Beirut, using the single hour of rationed state power to run the sprinkler. He then phones his mother, who is struggling to get a new passport at a state agency grappling with paper and ink shortages. “The public sector is at its end if we keep going like this,” Chaar told Reuters.

Like thousands of state employees in Lebanon, Chaar has been on strike for two months over the collapse of his salary caused by Lebanon’s economic implosion — one of the world’s worst in modern times.

The public sector paralysis is spreading further — this week judges launched their own protest, while soldiers moonlight to feed themselves and government offices run out of power and basic office supplies.

State infrastructure, already strained by years of unchecked spending, corruption and a preference for quick fixes over sustainable solutions, has reached a breaking point.

“We are in a state of collapse,” said Lamia Moubayed of the Lebanese Institute of Finance Basil Fuleihan, a research center at the Ministry of Finance.

In Parliament, there is no fuel to run a generator for the elevator — so security guards run messages up and down the stairs between workers.

Those registering a new car purchase with the department of motor vehicles were given handwritten notes instead of proper state-issued documents due to paper shortages.

Commanders in Lebanon’s security services are looking the other way as troops take on second jobs — typically prohibited, but now unofficially allowed as soldiers’ salaries crash.

The average public servant’s monthly salary has dropped from around $1,000 to barely $50 — and counting, as the Lebanese pound loses more value by the day.

That prompted tens of thousands of state employees – from ministries, local government bodies, schools and universities, courts and even the state news agency — to strike.

This week, 350 Lebanese judges will not show up for hearings, demanding a hike in their salaries, too.

“The judges are hungry,” said Faisal Makki, a founder of the country’s Judges’ Club — the judiciary’s equivalent of a syndicate or union.

Makki told Reuters the justice ministry had long been underfunded, so judges had for years been buying paper and ink for their office printers at their personal expense.

“Now I can’t do that because it means I couldn’t afford to eat. This is definitely a failed state.”

In response, the government is rolling out piecemeal policies. In a two-month stop-gap, it agreed to increase daily benefits and provide social assistance to most state workers, effectively doubling take-home monthly pay to just $200.

But with food prices jumping eleven-fold and many restaurants and even service providers charging in dollars, the olive branch has not satisfied Lebanon’s roughly 150,000 public sector workers.

“No state employee is able to buy a kilo of meat or chicken except maybe once a month. Our lives have become primitive, and we are only buying basic necessities,” said Chaar.

Nawal Nasr, head of a public sector employees association, said workers were demanding a five-fold salary increase and help with soaring education and health costs, but that has prompted fears of runaway inflation.

Prime Minister-designate Najib Mikati has said meeting all of the workers’ demands “is impossible and will cause a broader collapse of the situation.” Wage increases must come “within the context of a broader financial stabilization plan,” he said.

But political factions have yet to reach a consensus around such a plan — costing the government some of its highest-skilled workers. Nearly six in 10 state employees are either leaving or planning to leave — a pace not seen since the country’s 1975-90 civil war, said Moubayed.

“These are not numbers, these are the best people in the Lebanese state ... People we need for the recovery, for implementation of any structural reform plan Lebanon will eventually undergo,” Moubayed said.

Chaar, who holds a Ph.D. and heads a top finance ministry tax directorate after nearly three decades in public service, says he is demoralized and wants to leave Lebanon.

The public workers union he is a part of has lost roughly half its members, and its representative for aviation workers recently took a one-way ticket out of Beirut.

To those left behind, it feels like Lebanon’s pile-up of problems is finally catching up.

“The past years destroyed all of our efforts,” Chaar lamented as he recalled moves to improve governance via IT systems that have since crashed due to the crisis.

BEIRUT — It’s a weekday, but 50-year-old Lebanese finance ministry employee Walid Chaar is not at work and hasn’t been since June.He rushes to water the garden at his home in the hills south of Beirut, using the single hour of rationed state power to run the sprinkler. He then phones his mother, who is struggling to get a new passport at a state agency grappling with paper and ink...