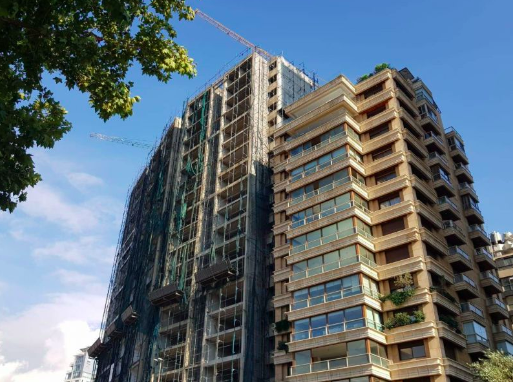 A construction site in a building in the Zokak el-Blat district. (Credit: UK)

The market for new residential buildings has abruptly stopped since 2019. At the same time, dozens of buildings under construction have come to a complete halt. Only a few developers are trying to complete their construction projects where apartments were sold before 2019.

Since it was ignited in 2019, the economic crisis has completely turned the real estate market in Lebanon upside down. Within weeks, developers and homeowners were caught off guard.

The banking restrictions, the devaluation of the Lebanese lira and changes in payment methods have disrupted the sector. Since then, the new housing sector in Beirut has been in turmoil.

The recent increase in the number of building permits (447 percent as of the end of Feb. 2022, according to the latest figures by the Order of Engineers and Architects in Beirut and Tripoli) is just an illusion and is not related to the current situation.

It stems from the fact that developers who bought properties several years ago are rushing to obtain a permit payable in Lebanese lira, before a possible change in the official rate, which is still at LL1,507.5 per dollar, while the latter is sold at nearly LL30,000 on the parallel market. So, this is not about a sudden boom in the sector. It is quite the opposite.

“Both developers and buyers have been affected by the banking restrictions and have found themselves paralyzed by this situation,” said Mazen Tabbara, developer of the Alessia building in Ras Beirut.

Ahmad Momtaz, secretary general of the Real Estate Developers’ Association in Lebanon, sounds the alarm. “This is a crisis never seen before. The real estate sector has a direct impact on more than sixty professions. The problem is serious. There are always solutions, but we need the state to help us, and quickly.”

A matter of reputation

The crisis resulted in developers quickly falling behind in the projects they had started before 2019, trapped by the rising price of building materials. Some then rushed to finish their buildings, while owners were forced to move into apartments in barely completed buildings.

In the worst cases, the developers stopped their projects completely, including dozens in Beirut, which affected the buyers terribly. Many were brought before the court.

“The work at many construction sites is [deliberately] slow, and this is only to calm down the people who bought off-plan. But, in the end, the developers can not complete their project,” said a developer who declined to be named.

“Some developers were brought before the courts [by buyers who bought off-plan]. They had bought [building] material in banker checks (either in Lebanese lira or in “lollars,” or deposits stuck in Lebanese banks only withdrawable at a rate lower than that of the parallel market) to finish their project. But their supplier gave up on them by returning their check and selling their stock to another client capable of paying in real dollars (called fresh dollars),” said Zaher Boustani, general manager of At Home, a real estate agency in Beirut.

However, there are still a few dozen residential projects underway, the vast majority of which are resold apartments that the developer is working to deliver. “The vast majority of my sales were made before 2019. We weren’t talking about fresh dollars or lollars back then. When the crisis started, my building was under construction. The idea of stopping (the construction) came up, but I decided to finish my project. It’s a matter of reputation,” said Tabbara.

“Since the market was dollarized, some buyers have been understanding and have accepted to pay part of their dues in fresh dollars. It is for them that I felt it is my duty to finish the building. However, in the end, this project has been a financial loss,” he said. His plan is to complete his construction during the summer.

Legally, a sales contract signed before the banking restrictions on dollar accounts is still valid although the construction costs have been dollarized. “The law does not protect us. I even have a client who exchanges his fresh dollars into lollars and pays me,” said a developer.

Faced with the increasing number of stalled construction projects, potential buyers no longer prefer to buy off-plan. No matter how well known the developer is, clients are not sure enough that the project they are interested in will be delivered. Under these conditions, buyers prefer to buy a finished product.

Focus on the foreign market

“Since the 2019 crisis, I no longer dare to offer my clients apartments under construction. I am afraid that the project will never see the light of day. To remain credible in their eyes, I prefer to recommend already completed real estate,” said Boustani.

In this vein, developers prefer not to launch new projects. Cost increases, delivery delays, shortages, and fluctuating profit margins linked to the dollar exchange rate are affecting their strategy.

“I have two plots, with building permits. But I prefer to wait and see where the country is heading,” said Ahmad Moumtaz, a real estate developer whose latest project is located in Qoreitem.

The owner of a plot in Hamra, Salam Farhat, is not interested in constructing a building there. However, the plans of his architect are ready. “It is no longer profitable. Already, there is a materials supply problem. Then the banks are not financing any more projects, it is necessary to invest with your own money. In addition, the demand is too low. It’s impossible to make pre-sales in fresh dollars these days.”

“Buyers are no longer buying off-plan as they no longer have trust. The few who are interested are looking for very good prices, which the new construction cannot offer, since the selling prices of finished apartments are, today, lower than their replacement cost. If I add the construction costs, the price of the plot and my profit, the value of the apartment on plan will be too high and therefore unsellable,” said Farhat, who has already built residential buildings in Achrafieh and Ras Beirut.

This situation is pushing Lebanese developers to turn to foreign countries, particularly investing in Greece or Cyprus. “It’s a way to stop being dependent on the Lebanese market,” said Farhat.

“Unfortunately, today, abroad, we can get subsidies, and investments are more profitable there than in Lebanon. That’s why the new government must activate a rescue plan by guaranteeing the bank deposits of the Lebanese to encourage investors to return to Lebanon,” said Moumtaz.

The temporary withdrawal of developers from the local real estate market points to the extent of the crisis. “Nobody really knows how the market will evolve in the future, but I am pessimistic. Real estate development in Beirut may remain at a standstill for many years,” said Farhat.

The market for new residential buildings has abruptly stopped since 2019. At the same time, dozens of buildings under construction have come to a complete halt. Only a few developers are trying to complete their construction projects where apartments were sold before 2019.Since it was ignited in 2019, the economic crisis has completely turned the real estate market in Lebanon upside down. Within...