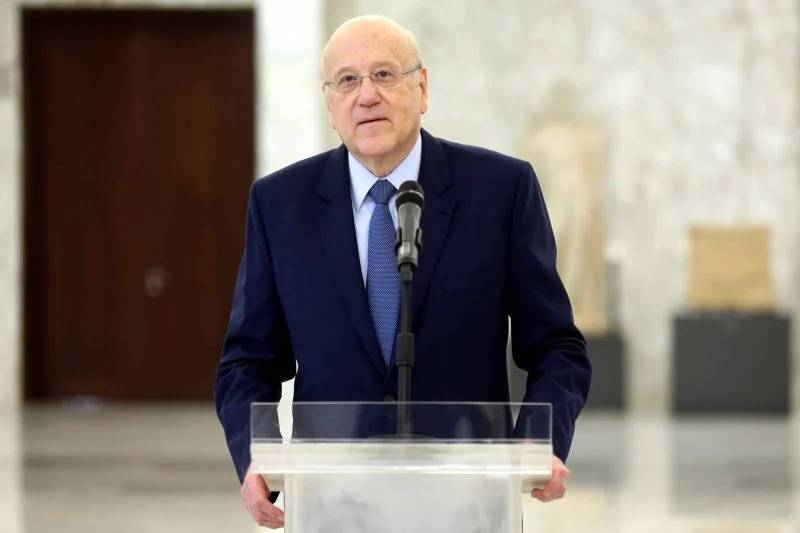 Is it a sign of goodwill or an effort to corner President Michel Aoun? Prime Minister-designate Najib Mikati surprised everyone Wednesday by quickly submitting a cabinet proposal, though he has just ended parliamentary consultations with the various political blocs.

“Following the non-binding parliamentary consultations held on the previous day, I found that the choices are very tight and that time is pressing,” Mikati told the press. He also said that he had given the president “a draft cabinet lineup deemed suitable to these circumstances.”

According to L’Orient-Le Jour, the lineup includes 24 names but most of the ministers in the caretaker cabinet remain in place, which makes it seem more of a camouflaged cabinet reshuffle than a new government.

According to Ali Darwish, a former MP close to Mikati, only five of the 24 current ministers will be replaced.

“If Mikati really wants to form a cabinet quickly, his choice of ministers should not be provocative. For our part, we do not see why the ministers who are close to the head of state or to Gebran Bassil (head of the Free Patriotic Movement) would be sanctioned for their political affiliation, while other ministers have remained in their post,” Rindala Jabbour, a FPM official, told L’Orient-Le Jour.

In the past for several weeks, in fact, relations between the Tripolitan billionaire and the FPM have come to resemble an arm wrestling match over a disagreement about the electricity file, which the Aounist camp treasures.

The dispute ignited between Mikati and Energy Minister Walid Fayad in May. Mikati accused Fayad of delaying the examination of an offer made by Siemens and General Electric, under which Lebanon would produce a 24-hour-a-day electricity supply.

In his first statement after being named prime minister-designate, Mikati said he wants to push through electricity reforms “free of political preconditions, learning from past failed experiences rather than repeating them.”

Will the words be acted upon? Several sources said that not only will Walid Fayad, a Greek Orthodox, not be reappointed in the post, there is talk that he will be replaced with Walid Sinno, a Sunni businessman and energy expert.

Economy Minister Amin Salam (Sunni) — who had announced his candidacy for the prime minister’s post — will also be replaced by caretaker Industry Minister George Bouchikian, who is close to the Tashnag party (a FPM ally).

According to political columnist Mounir Rabih, Foreign Minister Abdallah Bou Habib, affiliated with the Aounist camp, and Minister of State for Administrative Development Najla Riachi, close to Mikati, will not be part of the next team either.

Caretaker Minister for the Displaced Issam Charafeddine (Druze) is the fifth minister affected by these changes. In his proposed lineup, Mikati suggested current MP Sagih Attieh (Greek Orthodox MP from Akkar) for this post.

These recommendations made FPM circles cringe. As of Tuesday, the party leader had left the door open to FPM participation in the future cabinet.

“We reject the assumption that a particular sectarian group is entitled to claim exclusive rights to [lead] a ministry, while the others are not. Either all the posts are subject to rotation, or the current balance should be maintained,” said Jabbour, in reference to the finance portfolio, which Amal-Hezbollah see to be their preserve.

Of the other four sovereign portfolios — namely the ministries of defense, interior, foreign affairs and justice — usually assigned to a Greek Orthodox, a Sunni, and Maronites, respectively.

However, Amal-Hezbollah do not seem willing to let go of the Ministry of Finance. “The country needs a cabinet to be formed as soon as possible,” a source close to Ain al-Tineh told L’Orient-Le Jour. “This is not the time to open a sectarian debate, especially by a political camp that never agrees to give up any ministry.”

According to information obtained by L’Orient-Le Jour, this portfolio would either be assigned to former Amal MP Yassin Jaber, or kept in the hands of Youssef Khalil, who is close to Nabih Berri.

Without the FPM support, however, the fourth Mikati cabinet will probably never see the light of day. First, the prime minister-designate will need the president to sign the cabinet decree. Second, the Lebanese Forces already announced that they will boycott the cabinet and will not give it their vote of confidence.

By this reasoning, Mikati needs the FPM to secure Christian support support for his lineup. Moreover, without the Aounist parliamentary bloc’s support, the new team will probably not be able to obtain the confidence of an absolute majority of 65 elected MPs, particularly since Walid Joumblatt’s Progressive Socialist Party has not yet decided whether it will give its confidence to this cabinet.

“We are waiting for the ministerial statement, or at least the cabinet lineup,” Marwan Hamadeh, a MP affiliated with Joumblatt, told L’Orient-Le Jour.

Why did Mikati choose to present a team that may be difficult, if not impossible, to establish? In his circles, it is said that the prime minister-designate is driven by the urgency of the situation and knows, thanks to the parliamentary consultations, that all parties will be ready to make compromises for the good of the country.

What about the Aounists? “From what we see, Mikati has not taken the time to appraise the gravity of the situation,” Ghassan Atallah, FPM MP from Chouf-Aley, told L’Orient-Le Jour. “He has only rushed to submit a lineup that is not in line with the ambitions of the Lebanese.”

“I don’t know if he submitted this list knowing that it will not be accepted, in a bid to blame the political vacuum on the president,” he added, “but he proved that we were right not to designate him during the binding parliamentary consultations.”

Is it a sign of goodwill or an effort to corner President Michel Aoun? Prime Minister-designate Najib Mikati surprised everyone Wednesday by quickly submitting a cabinet proposal, though he has just ended parliamentary consultations with the various political blocs.“Following the non-binding parliamentary consultations held on the previous day, I found that the choices are very tight and that...