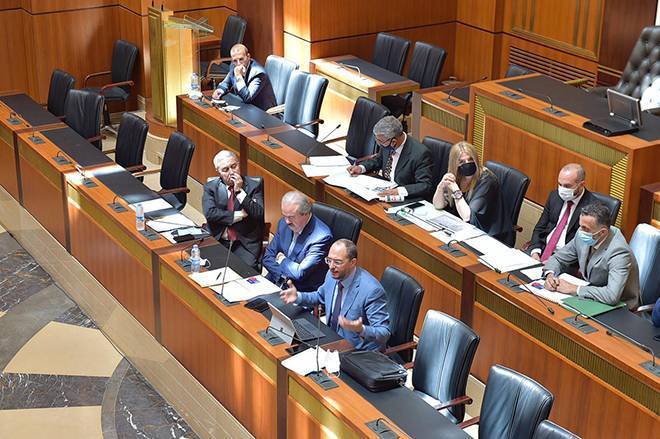 President of the Central Inspection Georges Attié (right) during a presentation to Parliament of the Impact platform, in June 2021. (Credit: NNA)

With a hung Parliament and hotly contested presidential elections later this year, Lebanon appears to be headed for yet another period of political paralysis. The likely outcome will be all too familiar: without any strategic direction or a fully functioning government, politicians will have a convenient excuse to once again demur from implementing urgently needed reforms and honoring their agreements with international partners, including the International Monetary Fund.

But history does not have to repeat itself. Even in the present circumstances, there are actions that the new MPs can take to help the country secure an IMF lifeline. The trick here is to focus on the low-hanging fruit. In the areas of public procurement governance, public sector auditing, and civil service mapping, significant opportunities for progress already exist.

Incremental steps toward tackling the root causes of Lebanon’s mounting public debt by (i) reforming corrupt public procurement practices, (ii) addressing inefficiencies in public administrations, and (iii) reigning in civil service spending, will be crucial to meeting the conditions of the provisional deal reached with the IMF, and thereby unlocking future assistance.

Long characterized as a gateway to malpractice, Lebanon’s public procurement landscape is ripe with opportunities to introduce e-governance tools that will streamline archaic government services, while at the same time ensuring greater equity and transparency. The 2021 Public Procurement Law envisioned exactly this, with the creation of a new Public Procurement Authority (PPA) tasked with standardizing procurement processes and procedures and operating an e-procurement platform.

However, an e-procurement platform — like other digital governance tools — will make little difference if it is operated without effective oversight. Without proper checks and balances, we will end up with the same old embezzlement — but now digital. Since the PPA, which will run the platform, is administratively positioned under the Council of Ministers, it is vulnerable to political interference. Under the current circumstances, we thus risk keeping public procurement in a closed loop with no external oversight.

Fortunately, article 74:5 of the new law places the PPA under the control of Lebanon’s main oversight bodies to ensure proper governance. As the only independent oversight agency already collecting national data on a digital platform (IMPACT), Central Inspection has the mandate, knowhow and pre-existing digital infrastructure to host the e-procurement system and ensure that activities on it are fully audited. MPs should therefore leverage CI’s independence and experience in this regard to accelerate the implementation of the Public Procurement Law in full alignment with the principles of good governance and transparency under which it was created, and to make sure that public procurement is not exposed to the influence of the cabinet.

Any efforts to reduce waste and inefficiency and improve transparency in the public sector must be targeted and evidence-based. However, efforts by Central Inspection to gather and publish audit data on public administrations are regularly met with resistance. Without enforcement tools and the ability to impose penalties, Central Inspection has little power to act on its mandate.

MPs have a role in ensuring that audit agencies are able to fulfill their mandates unfettered. New legislation can be introduced to give Central Inspection the legal tools to compel all administrations, public institutions, and municipalities to cooperate with auditors.

If Central Inspection’s auditing is expanded to include areas of financial management and all public administrations are compelled to supply the required information to auditors, the data gathered can be used to guide the IMF-required reforms and Lebanon’s recovery more broadly. Without baseline information, target performance benchmarking, and digital tools like IMPACT enabling real time monitoring of service provision, it will be near-impossible to guide the public sector toward delivering a better quality and availability of service.

MPs should therefore lobby for the expansion of Central Inspection’s data collection to include detailed indicators on the financial activities of state entities, including those involved in public affairs and managing public funds and for meaningful enforcement penalties to be introduced.

Public sector wages account for a third of Lebanon’s annual budget — a staggering figure with very little transparency or reliable data on the size or competency of the workforce.

To plug this information gap, Central Inspection and the Office of the Minister of State for Administrative Reform jointly created their Sectoral and Organizational Performance Measurement and Inspection Program. This should be built on.

Acting on the parliamentary Finance and Budget Committee’s request for a comprehensive mapping of public sector human resources, Central Inspection has additionally developed, deployed and internally tested a digital survey tool to quickly and efficiently gather key HR data from across the sector. Unfortunately, this latter work has been paralyzed by an overlap in the mandates of Central Inspection and the Civil Service Board. New MPs have an opportunity to reinvigorate this mapping exercise by facilitating these two oversight bodies to collaborate and to proceed jointly with this digital mapping.

Collecting detailed human resource information such as vacancy rates, salaries and qualifications in a database that oversight agencies can validate against other data sets, including the Finance Ministry’s payroll, is an essential first step toward ending the illegal but widespread practices of assignment by appointment and arbitrary promotion. The data collected will also help inform the potential reallocation of resources within the civil service.

Detractors may point to the complexity of the public sector and envision a drawn-out, time-consuming process. However, using a similar tool developed on IMPACT, 582,000 vulnerable households were mapped over a period of two months. This means that, if unobstructed, reliable data on the public sector that has eluded us for decades could be available in one month.

All this is to say: it is time for Lebanon to stop operating in the dark. There is no convincing reason why we cannot have reliable, accessible data on the public sector to inform effective, sustainable reform. The challenge now for our MPs is to capitalize on the skills we already have in Lebanon’s oversight institutions, and on tools like IMPACT which have produced many oversight reports, to build a more transparent state that serves public, not private, interests.

Carole RIZKALLAH CHARABATI is Research Director at Siren Associates (the company that developed IMPACT) and Professor of Political Science at Université Saint-Joseph.

With a hung Parliament and hotly contested presidential elections later this year, Lebanon appears to be headed for yet another period of political paralysis. The likely outcome will be all too familiar: without any strategic direction or a fully functioning government, politicians will have a convenient excuse to once again demur from implementing urgently needed reforms and honoring their...