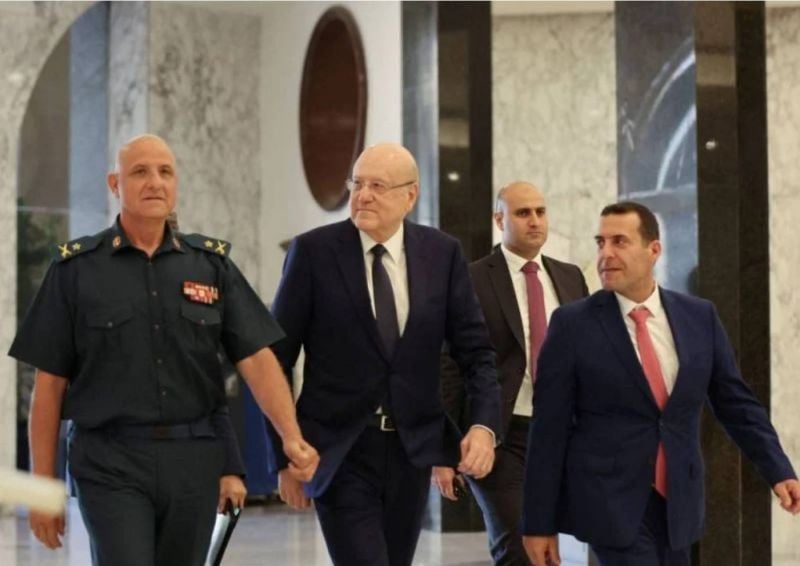 Najib Mikati will get down to business today. The prime minister-designate will hold non-binding parliamentary consultations with the various parliamentary components at Nejmeh Square, before embarking on the task of forming a cabinet.

This process seems to oscillate between a reshuffle of ministers and the appointment of a totally new team.

However, several political actors have not waited for the formalities to take place today and tomorrow in Parliament. They have already set their pre-conditions, related both to the nature and composition of the future team that should be thereafter subject to a vote of confidence in Parliament.

Theoretically, this team should only last a few months, until the election of a new president before the end of October. But in the event of a presidential vacuum, the Mikati IV cabinet will be required to run the country until a new head of state is elected. Based on that, several parties have made meticulous calculations, which could complicate things for the prime minister-designate.

However, the latter had already set the tone. In an interview with the daily Nidaa el-Watan newspaper on the eve of his appointment, he mentioned the possibility of making some changes to the composition of his caretaker team.

It is a way for him to accelerate the ministerial process at a time when the country needs to have a cabinet with full powers as soon as possible, and to free himself from the desires of some political factions.

He could also appoint a new minister of energy in the place of Walid Fayad, who is known to be close to President Michel Aoun’s Free Patriotic Movement, which has held this portfolio since 2008.

A war of statements broke out a few weeks ago between Mikati and Fayad, against the backdrop of the electricity file. Since then, this thorny issue has been at the center of a tug of war between the prime minister-designate and FPM leader Gebran Bassil.

Speaking following the consultations the FPM parliamentary bloc held with the President on Thursday in Baabda, Bassil demanded to include this sector’s reform in the next cabinet’s agenda.

The Tripolitan billionaire was quick to reply. In his first speech after his appointment, he said he will push through electricity reforms “by learning from past experiences rather than repeating them.”

For the time being, even if the FPM did not vote for him, it does not seem to want to argue with Mikati. However, it is against a reshuffle of the caretaker ministerial team.

“Bringing change in a few ministries does not suit us,” George Atallah, FPM MP for Koura, told L’Orient-Le Jour.

“We want a cabinet that meets our demands, including the dismissal of the BDL governor and the restructuring of the banking sector,” he said, adding that the Aounist bloc will hold a meeting before meeting with Mikati tomorrow afternoon.

Similarly, the Lebanese Forces parliamentary bloc will have a final position in the coming hours before heading to Parliament for non-binding consultations.

However, the broad outlines of Samir Geagea’s party’s position are known. The LF, which like the FPM opted for a blank vote in the consultations to designate the prime minister, thus depriving Mikati of Christian cover, said it is convinced that no ministerial team will be formed before the presidential election.

“It is therefore time to make efforts to create a climate conducive to the election of a head of state within the constitutional timelines (i.e. two months before the end of Aoun’s term on Oct. 31),” said an LF official, who added that his party will not take part in a cabinet that will only last for four months.

For its part, Hezbollah, a major contributor to Mikati’s appointment, seems to be pressing for a rapid formation of a new cabinet.

“We have no time to waste,” the head of Hezbollah’s parliamentary bloc, Mohammad Raad, warned yesterday at a partisan event in Harouf, South Lebanon.

“We must all hasten the formation of a cabinet that is achievable under these circumstances so that it runs the country’s affairs,” he added. Nabil Kaouk, a member of Hezbollah’s Central Council, called for the same thing.

Maronite Patriarch Bechara al-Rai also called, in his homily yesterday, for the rapid formation of a cabinet and for the efforts to focus on “the preparations for the presidential election to save the Republic.”

This call comes at a time when the patriarch has increased his criticism of Aoun in recent days. The head of the Maronite Church also urged “all parties to cooperate with the prime minister-designate, without any conditions,” in an implicit criticism of the FPM head.

In turn, the international community is closely following up on the developments on the Lebanese scene and has multiplied calls for a rapid formation of a cabinet.

Following the spokeswoman of the French Ministry of Foreign Affairs, the International Support Group for Lebanon urged “the Lebanese parties, including the executive and legislative authorities, to work quickly for the rapid formation of a government capable of implementing important outstanding reforms in order to alleviate the suffering of the population.”

It particularly implored the authorities to “respect the commitments made in the agreement with the International Monetary Fund, including budgetary laws, capital controls, banking secrecy ..., decisions of the government and the central bank ... to lay the solid foundations for a socio-economic and sustainable recovery of Lebanon,” said the ISG in a statement from the UN on Saturday.

So what will Mikati do?

“The prime minister wants to present a cabinet formula as soon as possible. The option of a cabinet reshuffle is on the table. But everything will depend on the results of the consultations with the parliamentary blocs,” said Ali Darwish, a former Tripoli MP who is close to Mikati.

This article was originally published in French in L'Orient-Le Jour. Translation be Joelle El Khoury.

Najib Mikati will get down to business today. The prime minister-designate will hold non-binding parliamentary consultations with the various parliamentary components at Nejmeh Square, before embarking on the task of forming a cabinet.This process seems to oscillate between a reshuffle of ministers and the appointment of a totally new team.
However, several political actors have not waited for...