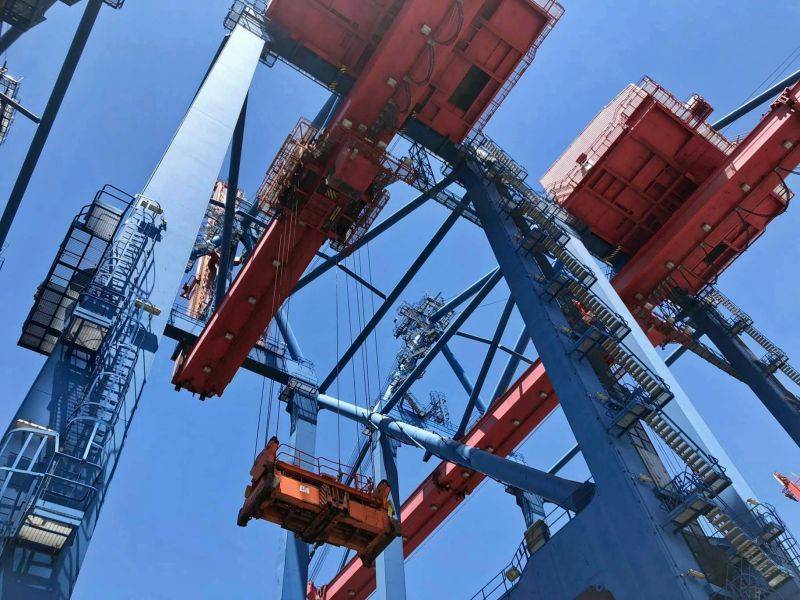 The giant cranes of the port of Beirut. (Credit: Phillipe Hage Boustros/OLJ)

The impact of the open strike of public administration employees, which began last Monday, was felt yesterday at the port of Beirut and the port of Tripoli (North Lebanon), the only two facilities equipped with container terminals.

In the capital, “hundreds of containers” of foodstuffs and agricultural raw materials were blocked, as mentioned in respective statements yesterday by the presidents of the union of food importers, Hani Bohsali, and that of economic organizations, Mohammad Choucair.

The activity was also impacted in Tripoli, according to the director of this infrastructure, Ahmad Tamer, who was contacted by L’Orient-Le Jour.

The situation was however “normal” with regard to air cargo, a source at Beirut International Airport said.

Both Bohsali and Choucair denounced the situation that jeopardizes the food security of the Lebanese while affirming their solidarity with the movement of civil servants.

Consequently, both called on the authorities to find an “emergency” solution to unload these containers and thus avoid a risk of shortage. Meanwhile “1.3 million” tourists and expatriates are expected in Lebanon for the summer season, according to Bohsali.

He told L’Orient-Le Jour that the situation could drag “at least until the end of the week, given that the civil servants have planned to carry on with their strike.”

Bohsali added that some of the containers, which had been already cleared, have “gradually” left the airport.

He also assured that there is for the moment “no risk of shortage” of food products.

Contacted by L’Orient-Le Jour, two well-informed sources assured that the problem “did not come from the employees of the container terminal of Beirut or the staff assigned to the port management.”

The Syndicate of Traders and Importers of Alcoholic Beverages also issued a statement on this subject yesterday, highlighting the “heavy losses” incurred by businesses, and called on “The Ministry of Economy, the port authority and Lebanese customs to exempt the alcohol import transactions from any restrictions and find a mechanism” to get the containers out of the port.

“Without this, the tourist season will not start,” the statement read.

Taking place against the backdrop of a multidimensional crisis in Lebanon that has been ongoing for almost three years, the mobilization of public sector employees aims to demand measures from the state to help them cope with the crisis and the national currency depreciation, including the increase of salaries and pensions, the alignment of these incomes with prices and inflation and the guarantee of the transport allowance.

These demands necessitate the government’s approval of the budget law for the year 2022, but since the parliamentary elections that took place in May, the cabinet has been in caretaker mode.

Yesterday, Labor Minister Mustapha Bayram assured that a wage increase for the private sector is being considered.

Imported goods were not alone to backlog in the capital’s port.

On Sunday, Ibrahim Tarshishi, president of the farmers’ union of the Bekaa, denounced the fact that “tons of Lebanese fruit and vegetables” intended for export were also stuck in the port, threatening to go on strike as well.

Contacted by L’Orient-Le Jour, Antoine Hoyek, president of the national farmers’ union, assured, however, that the problem had been solved yesterday.

This was confirmed by Ahmad Tamer who assured that clearance of agricultural products set for export “resumed in Beirut as in Tripoli.”

During a farmer protest yesterday in Zahle (Bekaa), the secretary of the agricultural unions in Lebanon, Ali Shuman, called on the Gulf countries, especially Saudi Arabia, to “open their markets to Lebanese agricultural products,” the state-run National News Agency reported.

This was a call to normalize trade relations between Lebanon and the Gulf countries that have been strained in recent years against a backdrop of regional tensions between Iran and Saudi Arabia.

Lebanese farmers have been suffering since April 2021 when Riyadh decided to boycott their products.

Moreover, long lines formed again yesterday in front of bakeries in Tripoli (North Lebanon), which is suffering from a shortage of bread, while residents protested in the streets calling on the authorities to take the necessary measures.

According to L’Orient-Le Jour correspondent Michel Hallak, the demonstrators called on the police and the ministries of economy and trade to “search the bakeries that are not open,” denouncing the “humiliation” the people have to go through as result of the shortages of bread as well as fuel.

Over the weekend, there was a lack of gasoline in several areas in the country.

At the end of last week, in the Nabatieh area in the South there was also a shortage of bread, causing the price of a bread bundle to double on the black market.

In light of the crisis situation in Tripoli, the head of bakery owners’ syndicate, Ali Ibrahim held a press conference yesterday in southern Beirut, during which he denounced the accusations against the sector that bakers are taking advantage of the crisis to make profits by stocking subsidized flour pending a lifting of subsidies.

He, however, hurled the same accusations at the flour mills that are currently at a standstill due to the delay in the payment of wheat imports by the Bank of Lebanon.

“It is disgraceful to announce that the stock of flour will only last 30 days,” he said, calling on the authorities to “ensure supplies so that the bakeries can operate.”

On Friday, caretaker Economy Minister Amin Salam denounced what he described as “theft” on the part of some private sector stakeholders regarding the subsidized wheat.

The day before, the president of the Union of Northern Workers, Chadi Sayyed, deplored the “smuggling of nearly 20 percent of imported flour to Syria.”

On May 6, the World Bank approved an emergency loan of $150 million to finance wheat imports, but the laws governing the agreement have yet to be passed by the newly elected Parliament.

The country has been concerned about its food security for several months, particularly its wheat supply, following the halt in imports from Ukraine and Russia, which have been at war since the end of February.

This story was originally published in French in L'Orient-Le Jour.

The impact of the open strike of public administration employees, which began last Monday, was felt yesterday at the port of Beirut and the port of Tripoli (North Lebanon), the only two facilities equipped with container terminals.In the capital, “hundreds of containers” of foodstuffs and agricultural raw materials were blocked, as mentioned in respective statements yesterday by the...