For the first time since the end of the 1975-90 Civil War in Lebanon, a report by Legal Action Worldwide sheds light on gender-based crimes committed during the years of fighting 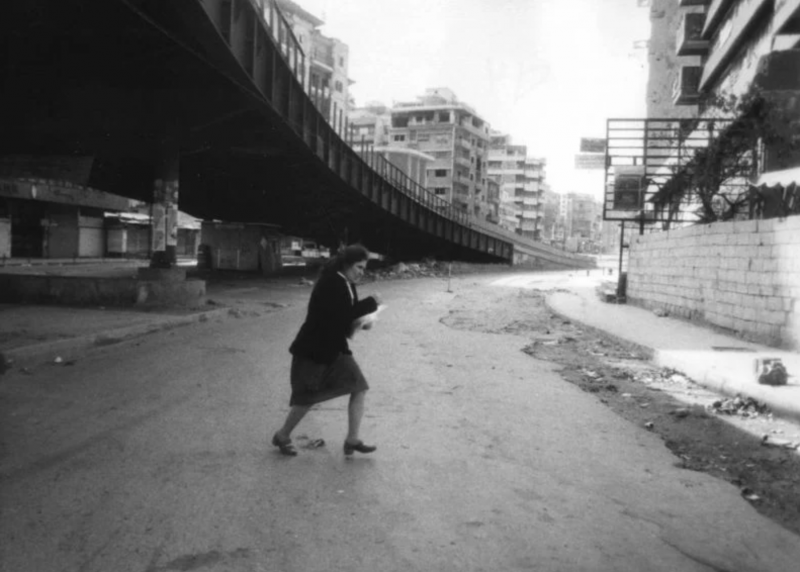 A woman crosses the street in a hurry on Feb.17, 1987, at the Cola bridge in Beirut (Credit: L'Orient-Le Jour Archives)

*Trigger warning: this article describes accounts of violence, rape, sexual assault, and mutilation and may be upsetting or traumatic to some readers. Please take care.

“They threw babies in the air and shot them. Then they raped their mothers.” “I saw five women being raped and then killed hanging from tree.” “Officers forced me to remove my veil and electrocuted my breasts.”

These are some of the appalling testimonies that were collected from women who lived through the atrocities of the Lebanese Civil War and who agreed to share their heart-wrenching experience, for the first time.

They are are published as part of a study by the Legal Action Worldwide entitled “They raped us in every way possible: gender-based crimes during the Lebanese civil wars.”

This study is the first since the end of the war to shed light on the gender-based crimes perpetrated during this dark period in Lebanon’s history.

It confirms many horrific stories, previously only passed on by word of mouth, and raises awareness of the extent and frequency of sexual violence perpetrated during the war.

“We’ve all heard about these atrocities, but when we started working on this report, we were shocked to discover how systematic rape was during this period. We didn’t expect to collect so many nightmarish stories,” said Fatima Chehade, director of LAW in Lebanon, a think tank founded in 2013 that highlights human rights violations in the Middle East, Africa and South Asia.

Some of the women named in the 80-page report were testifying for the first time in their lives, “because they were never asked to talk about it before,” Chehade said.

She added that reported abuses were committed by men affiliated with the authorities, militias close to the state or armed groups opposed to the state.

The victims are Lebanese and Palestinian women living in Lebanon, including pregnant women, mothers, and young girls, sometimes as young as 10 years old.

“They killed my father and my 14-month-old sister. Then three men came to our house to rape my other sister,” said one of the women LAW met, reporting events dating back to 1982.

“The militiamen forced me to undress and remove my veil. They then hit me with a stick while kicking me all over my body. They forced me to stand with a metal chair on my head ...,” said a woman who is now 52 years old.

Sexual abuse, forced prostitution, gang rape, sexual torture, murder and abduction of women and children are all atrocities highlighted in this report written in cooperation with the Committee of the Families of the Kidnapped and Disappeared of Lebanon and Justice Without Frontiers.

To prepare this study, LAW conducted an 18-month survey of 150 women from North Lebanon, the Bekaa, Beirut, Mount Lebanon and South Lebanon, including Lebanese Christians and Muslims as well as Palestinian Muslims.

Among these people, 36 women between the ages of 50 and 70 agreed to give their testimonies on the abuses they suffered or witnessed, especially in Beirut and Mount Lebanon.

“We limited ourselves to a precise number of witnesses, due to a lack of time and financial means. We could certainly have collected more testimonies if we had been able to continue our work,” Chehade said.

“Rape was used continuously during the Civil War to push certain communities out of particular neighborhoods or areas. Sometimes rape of women was also used as a means to force men to join a particular militia,” she added.

To deal with the emotional and traumatic weight of the reported events, the team that conducted the interviews was trained for three months by a British lawyer who specializes in such cases.

“We even brought in a researcher who specializes in gender-based crimes, as well as a psychologist who was available to listen to the team,” Chehade said.

Psychological support was also offered to the women interviewed, some of whom still suffer physical or psychological scars to this day.

“I don’t feel well, be it mentally or physically. I suffered from insomnia for a long time. I was always afraid of being killed; I became paranoid. Now I have chronic stomach problems,” a 52-year-old victim said.

“The survivors were reluctant at first. But they finally agreed to talk once trust was established. They all confided in the presence of our lawyers,” Chehade explained.

“The general amnesty law of 1991 gave way to a culture of impunity which prevented these women from speaking out for years. To preserve these women’s anonymity and dignity, no indication was given of their identity or that of their assailants,” she added.

Chehade went on, saying, “These survivors want justice. They want recognition of their suffering, and they want a public apology from the authorities. They can even take legal action, if they want to. In any case, this report has brought back many pent-up emotions. This is a first step in the struggle for justice for the victims of the Civil War.”

*Trigger warning: this article describes accounts of violence, rape, sexual assault, and mutilation and may be upsetting or traumatic to some readers. Please take care. “They threw babies in the air and shot them. Then they raped their mothers.” “I saw five women being raped and then killed hanging from tree.” “Officers forced me to remove my veil and electrocuted my breasts.”These...