Thanks to his character as the “son of…”, through which he criticized political familial succession, the 33-year-old comedian has taken social networks by storm in recent weeks 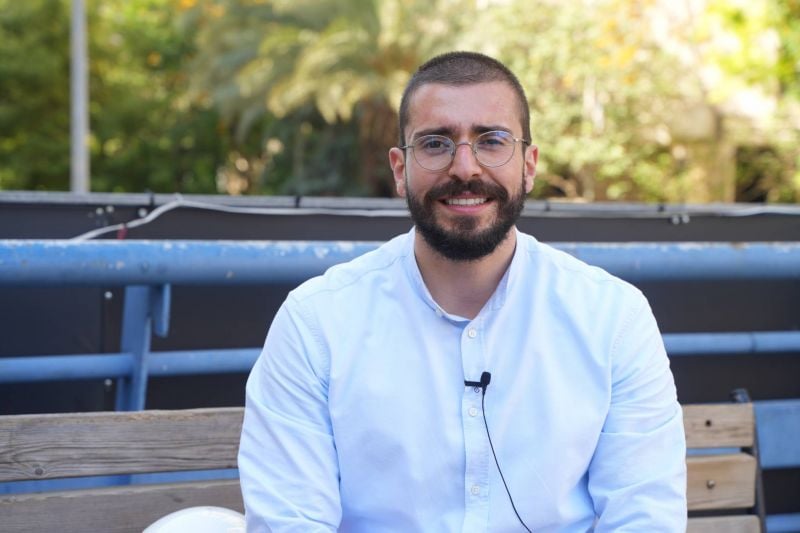 Imad Kehdy, a 33-year-old comedian, has set the online world on fire during the legislative elections. (Credit: Mohammad Yassine/OLJ)

A suit and a tie in the morning, and stage wear in the evening. Imad Kehdy, a 33-year-old comedian and employee at an insurance company, has been creating a buzz on social media for several weeks.

This rising standup comedy star in Lebanon recently managed to double his subscribers thanks to a series of satirical videos in which he impersonated a young candidate in the parliamentary elections named Anthony Tony Antoine Antoun Eid.

With election posters, press conferences and meetings with his supposed voters, Kehdy went all the way through to the end. He even went so far as to walk around town with presumed “supporters,” wearing a T-shirt with the image of his fictional character.

He went a long way to denounce political power passed from fathers to sons, while the real parliamentary elections took place on May 15, with several candidates from “political dynasties,” as Kehdy puts it, running.

“When I started comedic performance two and a half years ago, I didn’t understand much about politics. Then, with the 2019 uprising, politics caught up with me,” the comedian told L’Orient-Le Jour.

It did to the point of creating a fictitious candidate from scratch to denounce, through comedy, a very Lebanese trend.

“Politics is not a business that you inherit. Either you know what you are doing, or not,” Kehdy said.

His character, a candidate for the Greek Orthodox seat in Metn, is reminiscent of the heir of the Murr dynasty, Michel Murr, recently elected to Parliament for the same seat.

This has earned Kehdy some criticism.

“At first, people thought that I was only targeting Michel Murr, while this was not my intention, even if it is true that he has been an inspiration for a lot of material. He surprised me with each of his statements,” said the actor.

“I chose the Greek Orthodox seat for my character, because I belong to this community and I did not want to criticize the other religious denominations. I then chose the Metn by chance,” he added.

During his fictitious election campaign, Kehdy’s character repeated every single cliché often seen from political candidates, starting with an official portrait offered by one of his “supporters.”

He then held a press conference and took part in an interview, fully in character and with all seriousness. He even went out onto the field on May 15, the day of the elections, with a group of so-called “supporters” wearing T-shirts bearing his image.

He also followed the results live with members of his electoral machine, only to discover that he was not even a candidate.

“Anthony Eid lost because he realized at the last minute that he wasn’t even part of the legislative race. He had counted on his father to file, but the latter did not,” said Kehdy, who, from the beginning, planned that this is how the candidacy of his imaginary character is going to end.

Anthony Eid’s character allowed the young comedian to go from 8,000 to about 18,000 followers on his Instagram account in a few weeks. His satirical videos were watched in the Arab countries and succeeded well in Syria, Kuwait and Palestine.

Kehdy did not expect this success when he embarked on his standup comedy journey two and a half years ago, on an evening dedicated to amateurs.

“I had prepared a five-minute sketch at the time and was afraid I wouldn’t be good enough. But I was so successful that night that the organizers asked me to work with them the next day,” he recounted.

Between his job as an insurance agent and his career on the stage, the young actor’s days are full.

“I live in two completely different worlds. It’s a lifestyle that is not easy to maintain, because you have to devote a lot of time to writing,” said the actor who revealed that his “dream has always been to do theater.”

Nevertheless, some Internet users believed in the character of Anthony Eid to the point that they asked him for help in these times of acute economic crisis.

“I received photos of empty fridges on social networks. I did not dare to reply. One young man even took a picture of his parents in front of the fridge to prove to me that he was telling the truth. These images continue to haunt me,” he said.

“Some people also sent me their resumes or diplomas, asking me to help them get a job. I got depressed and didn’t know what to do. I did not want to deceive them by revealing that I am an actor, because I see their real suffering,” Kehdy said.

It is a painful experience in some aspects, but also a motivation for the actor to continue his journey.

“I write as much as I can and work on creating new characters. I hope to be able to point at what is wrong with the country and denounce the problems through comedy,” he said.

This article was originally published in French with L'Orient-Le Jour.

A suit and a tie in the morning, and stage wear in the evening. Imad Kehdy, a 33-year-old comedian and employee at an insurance company, has been creating a buzz on social media for several weeks.This rising standup comedy star in Lebanon recently managed to double his subscribers thanks to a series of satirical videos in which he impersonated a young candidate in the parliamentary elections...