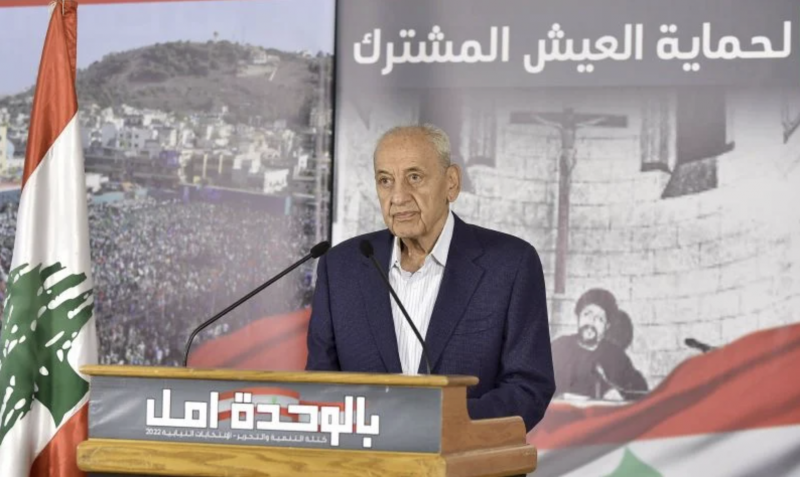 Parliament Speaker Nabih Berry during a speech on May 17, two days after the parliamentary elections. (Credit: Hassan Ibrahim/Lebanese Parliament)

Ensuring the comfortable re-election of outgoing Parliament Speaker Nabih Berri is the objective behind the talks that have been underway in political corridors ahead of the first session of the new Parliament, during which the Parliament speaker and his deputy should be elected.

This time the task seems more complicated than in previous years.

After the legislative elections, the main Christian parties and several elected MPs of the protest movement were quick to set the tone: No to the re-election of Berri as head of parliament.

This is a position that several mediators, including Hezbollah, hope to be able to soften ahead of the session, the date of which has yet to be announced.

According to Article 2 of Parliament’s rules of procedure, the newly elected Parliament should meet within 15 days of the start of the legislature to elect a speaker and a deputy speaker.

But for the time being, Berri, the outgoing speaker and oldest MP, has yet to call the Parliament to a session, rekindling fears that the old habits of political and institutional deadlock as a form of pressure are set to be back on.

“The speaker still has time to call the newly elected MPs to convene, giving them time to adjust to their new role,” a source close to Berri told L’Orient-Le Jour.

Except that, according to information obtained by L’Orient-Le Jour, the outgoing speaker appears to be waiting for the outcome of the behind-closed-doors talks between Hezbollah allies that have been taking place before taking action.

During the festival organized a few days after the parliamentary elections, Bassil, MP for Batroun, questioned the reasons that prevent other candidates from running for the speakership, thus implicitly reiterating his opposition to Berri’s re-election as head of Parliament.

Berri is a long-time rival of President Michel Aoun and his son-in-law, Bassil.

According to L’Orient-Le Jour’s political columnist Mounir Rabih, Hezbollah allegedly suggested that some of the Aounist MPs who are not close to Bassil, such as Simon Abi Ramia or Ibrahim Kanaan, as well as MPs of Armenian party Tashnag, vote in favor of Berri.

“This is not a mediation in the true sense of the word. It is a phase where all the protagonists are in contact with each other,” said Alain Aoun, FPM MP for Baabda, noting that the issue will be discussed during the first meeting of the FPM parliamentary bloc today.

Meanwhile, the opposition and independent candidates, as well as the Lebanese Forces stand their ground opposing Berri’s re-election as head of Parliament.

“We can in no way name Mr. Berri because he is part of the other camp,” said LF leader Samir Geagea in an interview with AFP on Friday.

The day before, on the sidelines of the first LF parliamentary bloc meeting, Geagea mentioned the characteristics that he believes the new head of legislature should meet.

“Any candidate seriously wishing to run for Parliament speaker must make sure that the strategic decision of peace and war is only in the hands of the Lebanese government ... He should also commit not to close the door of the Parliament under any circumstances,” the LF leader said, in a clear criticism to Berri who, in 2006 to 2007, paralyzed Parliament in the wake of the tug of war between the March 14 and March 8 camps.

“Everyone is free to take the position they want. The important thing is that the LF and FPM MPs attend the first parliamentary session,” said the source who is close to Berri, playing down the impact of re-electing Berri without a large Christian political cover and the support of MPs who are linked to the October 2019 opposition.

Deputy speaker: LFs and the protest movement take their time

It seems that the real battle is over the post of deputy speaker, as Berri is guaranteed to be re-elected, even with a narrow majority. A member of the Parliament bureau, which sets the agenda for sessions, the deputy speaker also heads the meetings of the joint committees that examine bills and draft laws before referring them to the assembly.

Here too, Bassil set the tone on Saturday, and said: “Those who think they can offer us a barter to elect the speaker in exchange for the deputy speaker’s seat are mistaken,” he said, while Elias Bou Saab (Greek Orthodox), MP for Metn, is seen as the natural FPM candidate for this position. “Bou Saab has a chance to hold this position,” said Alain Aoun, not wanting to anticipate the meeting of his parliamentary bloc.

In contrast, the LF are adopting “a calm approach,” said Ghassan Hasbani, an elected MP for the LF in the Beirut I constituency, while there has been talk about his candidacy for the post for the past few days.

“I am not a candidate for the post of deputy speaker of Parliament. Moreover, the party will not have a candidate,” Hasbani told L’Orient-Le Jour.

Commenting on the reasons for this decision, he stressed that his party “would like to collaborate and coordinate with the forces of change and the protagonists who support a sovereignist discourse, rather than opting for unilateral approaches.”

This LF willingness to reach out to the protest movement’s MPs comes at a time when reports circulated in the past few days on a meeting between Melhem Riachi, the new LF MP for Metn, and Melhem Khalaf, one of the elected protest movement MPs in the Beirut II constituency.

Is this a prelude to a deal on the post of deputy speaker? “Not at all. Melhem Riachi is my friend on a personal level,” said Khalaf, who added that he is not running for this post.

“We (the protest movement MPs) are forging an identity. And we will express our official position in the next two or three days,” he said in an interview yesterday.

“We are a third way. We do not support one side or the other. But we don’t have a problem with them coming closer to our positions,” Khalaf added, leaving the door open for an agreement.

Ensuring the comfortable re-election of outgoing Parliament Speaker Nabih Berri is the objective behind the talks that have been underway in political corridors ahead of the first session of the new Parliament, during which the Parliament speaker and his deputy should be elected.This time the task seems more complicated than in previous years.After the legislative elections, the main Christian...