The first five lessons of the Lebanese legislative elections

The Lebanese Forces seem to be the big winners, Hezbollah could lose its majority, the opposition could have made an important breakthrough 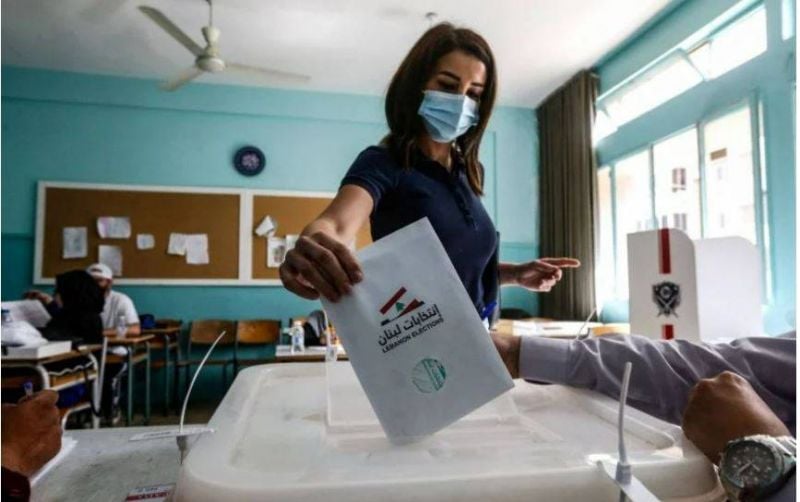 A woman depositing her ballot in the ballot box for the legislative elections yesterday in the southern suburbs of Beirut. (Credit: Louai Beshara/AFP)

On the surface, nothing has changed. Despite the economic crisis, the double explosion at the port of Beirut, and the October 2019 uprising, the next Parliament will be largely made up of traditional parties and figures. On closer inspection, however, several significant dynamics stand out, so that the new assembly will actually be quite different from the one that prevailed.

As of Monday morning, the results were still partial and even very unclear in several constituencies. That said, we can already highlight five major developments.

The first is that the Lebanese Forces appear to be the big winners of the election. Samir Geagea's party could obtain at least 20 seats and would thus become the leading Christian force ahead of the Free Patriotic Movement a few months before the end of Michel Aoun's mandate. The LF, according to partial results, improved their score in Beirut I (three MPs compared to one in 2018), in Baabda (two MPs compared to one in 2018), in Metn (two MPs compared to one in 2018). More surprisingly, they may have managed to make their entry in Tripoli by obtaining the Maronite seat. The results in Jezzine — where the LF also claims to have won at least one seat — and in Akkar, however, are still unclear. The Christian party also managed to keep its MP Antoine Habchi in Baalbeck-Hermel in a difficult context marked by significant pressure from Hezbollah.

The Free Patriotic Movement won 16 MPs, according to partial results. The Strong Lebanon bloc won 29 seats in 2018 and is expected to win only 19 seats this time. This is a significant drop, but Gebran Bassil's party managed to limit the damage in a context that was very unfavorable to it.

The partial results give the impression that the next Parliament will be essentially composed of two blocs, one led by Hezbollah and its allies, the other by the Lebanese Forces and their allies, which suggests a return to a strong polarization comparable to what Lebanon experienced in 2009. This is especially true since the Kataeb, whose rhetoric is also very strong against the pro-Iranian formation, also seems to be making progress by obtaining a seat in Kesrouan in addition to the three they already had.

Hezbollah and its allies

The second dynamic, not yet confirmed, is that Hezbollah and its allies seem to have lost their majority in Parliament. They have suffered significant losses, according to the partial results, especially among Christian constituencies. They seem to have compensated for some of these losses with gains on the Sunni scene, where they are benefiting from the withdrawal of former Prime Minister Saad Hariri. But will this be enough to obtain a majority of at least 65 MPs? As a reminder: in 2018, Hezbollah and its allies obtained a majority with 71 MPs out of 128.

According to the first results, the candidates considered close to the regime of Bashar al-Assad have obtained very bad scores in the four corners of Lebanon. Partial results indicate the defeat of Talal Arslan in Aley, Wiham Wahhab in the Chouf, Assaad Hardan in South Lebanon III and more surprisingly, Elie Ferzli, the vice-president of the Parliament, in the Bekaa West. In addition, Faisal Karami's defeat in Tripoli could be added to this. The former head of general security, Jamil Sayyed could qualify with a score that is significantly lower than in 2018.

No clear majority is expected, however, and the Parliament is likely to be more fragmented than ever. That said, the forces hostile to Hezbollah, even if not allied, are likely to be more numerous in Parliament. The first test will be the election of the head of Parliament, which has been held by the unmovable Nabih Berri since the end of the civil war. The leader of the Amal party is not in a good position, since he is not expected to benefit from the votes of the protest, nor from those of the LF or even of the FPM.

The forces of protest

The third dynamic is the important breakthrough of the protest forces, according to the partial results. The two most symbolic victories, according to the first results, are those of the opposition candidate Elias Jarade in South III, in a region typically held by Hezbollah-Amal, and that of Marc Daou against the Druze leader Talal Arslan in Aley.

The opposition forces are expected to win three seats in the Chouf-Aley constituency, two to three seats in Beirut II, one in North Lebanon III and one in South Lebanon III. The surprise is that they are also expected to win a seat in Tripoli. The partial results from Beirut I, however, appear to be more disappointing for the opposition forces. The constituency was presented as the most favorable to these movements, but they appear to have won only one seat, probably because of their divisions.

The counting is not over in Metn and Baabda, where the protest candidates Jad Ghosn and Michel Hélou (former executive director and current board member of L'Orient-Le Jour) seem to have scored very well. For the moment, however, this is not enough to obtain an electoral threshold.

The question now is whether these forces will unite in a single bloc, which could have some influence. They could also choose to ally themselves, at least circumstantially, with the re-elected independent figures and the Kataeb, which would allow them to have a significant bloc of between 15 and 20 MPs.

The fourth dynamic is the fragmentation of the Sunni scene after the withdrawal of former Prime Minister Saad Hariri. Partial results indicate that former Prime Minister Fouad Siniora missed his bet, but also that the current head of government, Najib Mikati, recorded very poor results in Tripoli. Several leading figures do not seem to have survived the election politically, including Mustapha Alloush, Sami Fatfat and Faisal Karami in Tripoli. The vacuum created by the absence of the blue party seems to have benefited mainly anti-Hezbollah figures, notably Ashraf Rifi in Tripoli and Osama Saad in Saida, as well as the protest forces. The leader of the Future Movement played the role of shock absorber in the former Parliament in the confrontation between Hezbollah and its opponents. In his absence, it should be much stronger, but the Sunni leadership is likely to play a rather secondary role compared to the LF.

Finally, the last dynamic is the decline in the turnout rate compared to 2018, from 48.68 percent to 41 percent according to figures provided by the Ministry of Interior, shortly before 11 pm. Note that it was not clear whether these figures include the expatriate vote, where the turnout is about 60 percent, which could raise the overall rate by several points.

Given the crisis in Lebanon since 2019, the October 17 uprising and the double explosion at the port of Beirut, the turnout appears not only low but also disappointing. However, this impression must be put into perspective by two essential data points. The first is that if the turnout is always low in Lebanon (it reached 55 percent in 2009), it is largely because the list of registered voters is not updated from one election to the next and includes many people who have left Lebanon for one or more generations, or even people who are deceased. In other words, if the list were updated, the turnout would probably be higher than the official figures indicate. The second fact is that turnout is on average similar to what it was in 2018, with the exception of areas where the Sunni community is in the majority. In these areas, it is down significantly, probably due to the withdrawal of former Prime Minister Saad Hariri and his call to boycott the elections — a call that seems to have been only partially heeded, since while participation has declined, it has not collapsed.

This article has been updated with additional analysis re. the Sunni scene.

On the surface, nothing has changed. Despite the economic crisis, the double explosion at the port of Beirut, and the October 2019 uprising, the next Parliament will be largely made up of traditional parties and figures. On closer inspection, however, several significant dynamics stand out, so that the new assembly will actually be quite different from the one that prevailed.As of Monday...