Can Lebanon’s opposition figures make the leap from syndicates to parliament? 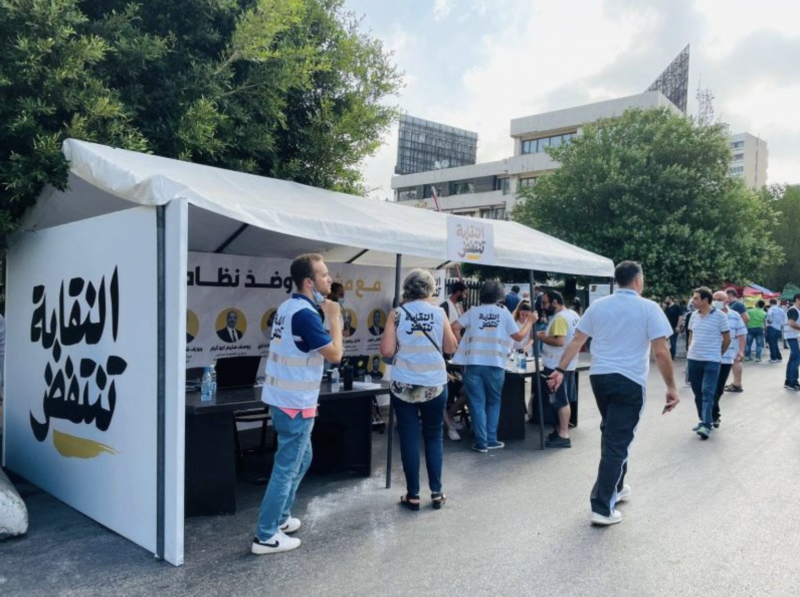 Volunteers with the Naqaba Tantafid coalition at a kiosk during the second round of elections for the Order of Engineers and Architects. (Credit: Naqaba Tantafid Instagram page)

BEIRUT — Against all odds, opposition groups have managed to nab notable victories in professional syndicate elections since 2019.

The added significance of these triumphs lies in the fact that, in lieu of a reliable polling system in the country, syndicate elections are often regarded as a foreshadowing of how the parliamentary elections might turn out. So, now that the legislative elections are at the doorstep, how are these syndicate luminaries that are now running for Parliament positioning themselves, and what changes do they plan to make if elected?

Some of the candidates include former presidents of the largest professional syndicates in Lebanon, such as Melhem Khalaf and Nuhad Yazbik Dumit, who presided over the lawyers’ and nurses’ syndicates, respectively, as well as many who were involved in the independent campaigns, including Nakaba Tantafed, which won last year’s election for the Order of Engineers and Architects, such as Hania Zaatari and Sarah Yassine. Despite this, some feathers were ruffled, especially when it was time to select candidates to be included on a unified list.

According to Nadim El Kak, a researcher at The Policy Initiative, a recently-founded independent Lebanese think tank, it is always beneficial when a candidate has a background in syndicate politics, as this could “reflect a certain commitment to that labor struggle and understanding its importance, considering the current financial and socio-economic collapse.”

However, since the end of Lebanon’s 15-year Civil War in 1990, syndicates have fallen prey to warlords-turned-politicians who have taken advantage of them as part of their political gamesmanship and division of spoils.

Through this mechanism, syndicates became a form of service provision.

But in the wake of the “You Stink” protests and the Oct. 17 revolution, more and more activist groups fought to take back the syndicates away from the grips of the dominant political groups.

Nakaba Tantafed is a group that organized engineers who share a common goal of creating change within the current engineers’ syndicate in Lebanon, which they consider to be corrupted and unqualified to represent their interests. After being part of Nakaba Tantafed’s secretariat, Hania Zaatari became a candidate for the presidency of the Order of Engineers, challenging Aarif Yassine who was set to win by acclamation of an internal primary. Zaatari also did it to encourage young women to become candidates.

“Working at the Ministry of Industry, I wanted the Order of Engineers to play a role in the government.” This experience gave her insight into how flawed the government is: “I see the laws are not really accessible for people. They're not even clear and are even contradictory. Nobody is renewing them. Nobody is fixing them.”

This is one of the main issues why she’s running as the Madinati (also known as Beirut Madinati) candidate on the “We Are the Change” list in the South I district.

Activist-turned-parliamentary candidate Nuhad Dumit, who served as President of the Order of Nurses from 2015 until 2018, is running on the “Beirut the Change” list in the Beirut II district. While she first ran in the legislative elections in 2018 on the civil society list “Kulluna Beirut,” she did not receive enough votes to clear the electoral threshold.

Unlike other syndicates, the Order of Nurses was different, Dumit was part of a 30-year struggle to have the syndicate officially recognized.

“The nurses struggled to get the Order of Nurses, the same status as the order of physicians, lawyers, engineers, pharmacists, etc,” she said. Unlike other unions, nurses were kept from having one because there was opposition to this from the Health Committee of Parliament, owing to the fact that its members were “usually doctors or owners of hospitals,” and they wanted to keep the status quo.

“But at the end of the day, we did achieve that in December 2002, after so many challenges and struggles. Personally, I started with this in 1981-82, the youngest fresh graduate then, I was a member in the preparatory committee for the Order of Nurses,” she explained.

Dumit, who is deeply involved in health politics and health policy, says that the country’s laws related to health are deeply archaic, and in dire need of reform. Another crucial issue Dumit will go to bat for is universal health coverage. “We signed agreements with WHO and UN agencies a long time ago. Have we achieved it? No,” she lamented.

Melhem Khalaf, arguably the most famous candidate to come out of the syndicates, has a long record of public service, having co-founded the NGO Offre Joie in 1989. Khalaf’s 2019 election as the head of the Beirut Bar Association (BBA) was seen at the time as a sign of the public’s readiness to reject traditional political parties. During his tenure as BBA head, Khalaf’s notable accomplishments included upholding Article 47 of the Code of Criminal Procedures, and lawyers’ access to police stations, as well as setting up defense teams for the survivors and victims of the Beirut port explosion. He also managed to get authorities in the UK to prevent the dissolution of Savaro Ltd., the UK-registered firm suspected of importing the ammonium nitrate that detonated in the blast, in a bid to prevent the entity from evading criminal proceedings.

Khalaf even lifted the immunity of two lawyers, MPs Ali Hassan Khalil and Ghazi Zeaiter, in relation to the port blast investigation. Attorneys in Lebanon are protected from prosecution, which must be approved by either the Beirut Bar Association or its counterpart in Tripoli. He is running on the same list as Dumit in the Beirut II district.

Although she was not officially a part of the Nakaba Tantafed list as she’s not a member of the order because her diplomas are from the U.S., Sarah Yassine, who is running in the highly contested Beirut II district, was campaigning for them.

“I was working on getting people to vote for them, I am a friend of them,” Yassine, who is a landscape architect and urbanist, says.

From a very young age, Yassine was involved in activist circles as an environmentalist involved in the Dalieh, Bisri and Fouad Butros campaigns. Coming from a secular upbringing, she was an active participant in the October 17 revolution, during which she says she got injured while confronting a lot of politicians at public spaces.

“And for me running for parliament was the natural progression of everything I've done in my life,” Yassine says.

She initially ran on the Beirut Madinati list which withdrew last week. However, Yassine didn’t drop out as, she says, “legally, no one can drop out.”

Rather than joining forces in a unified list, there were initially three opposing lists in the Beirut II district. Yassine says the scattered lists can be attributed to several factors. “There were many amazing candidates but there was a lack of a proper selection process or infrastructure. In terms of when you have three amazing candidates per seat, who do you choose and why?” says Yassine.

Additionally, she says, some lacked “political maturity” in terms of accepting public debates or a primary election and there were issues with compromise in terms of some political program and agenda of some candidates. “And the fact that there were many different groups who all wanted to be represented. So it was hard to fit everyone within eleven seats,” she adds.

Many claimed along the way that Melhem Khalaf was behind a lot of the decisions that were made to allocate seats. Yassine pointed to the fact that Khalaf made a habit of meeting the candidates at either his home or his office. “He was like the chaperone,” Saying that much of the negotiations for the list formation only involved the men, “whether with him or Ibrahim Mneimeh or Waddah Sadek…male negotiator to male negotiator,” Yassine says.

“I mean, I don't know that any woman negotiator or representative was present, at least I can speak about myself, I was never invited to join any meeting around this table, neither as a candidate nor as a person whose name was being discussed,” she added.

While her experience was clearly rife with disappointment, Yassine hopes that these mistakes will be rectified in the future. “It’s not the change that I aspired to. I hope that everyone will learn from the process, and that they will do better next time.”

Khalaf responded to the claims saying: “We invited all the groups without any discrimination, I did not accept until all of them were present...We ended up with 30 people who wanted to be nominated. We only have 11 seats, we don't have 12.”

As for what their conditions were to determine who would make good candidates, he added that he wished “[they] had more time to do a more objective way of selecting people.”

The Dumit and Zaatari campaigns weren’t without their hurdles, most notably what they described as the media silence surrounding their candidacies. Dumit blames the money it takes to make media appearances, “I don't have money. And even if I had the money, I will not spend it on media [exposure].”

Zaatari agrees that exposure is a stumble block: “We got a few billboards, we paid for some and we got support for some and people donated some. But we're not getting on TV and it's very expensive to get on TV. One time we asked for coverage of a press conference…and they said $60,000 fresh.”

Ultimately, whether wins in the syndicate elections can resonate at the national level is yet to be seen. For El Kak, the legislative election cannot be compared to others because “traditional political parties deploy a lot more of their resources,” making it harder for opposition groups to compete, when compared to syndicate elections.

Geha concurs that the stakes are different, but she noted that “It's still hard to win in both [elections], because the evil people take elections very seriously. You know, they want every single seat.”

From hair styles to road paving: The gray area of clientelism during elections season in Lebanon

BEIRUT — Against all odds, opposition groups have managed to nab notable victories in professional syndicate elections since 2019.The added significance of these triumphs lies in the fact that, in lieu of a reliable polling system in the country, syndicate elections are often regarded as a foreshadowing of how the parliamentary elections might turn out. So, now that the legislative elections...