From hair styles to road paving: The gray area of clientelism during elections season in Lebanon 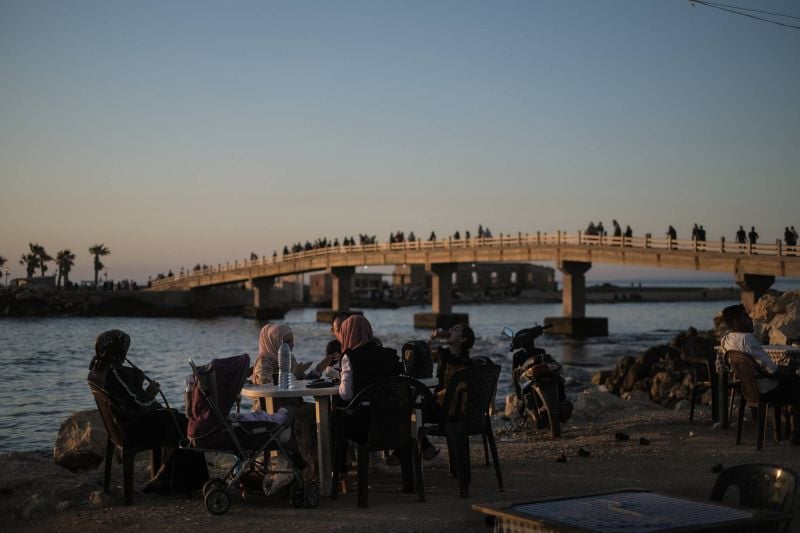 Families gather on the corniche in Tripoli in the week ahead of the May 15 election. Residents of the city said vote buying has been widespread there. (Credit: João Sousa/L'Orient Today)

BEIRUT — In the leadup to the 2018 parliamentary elections, some 5,000 people got public sector jobs amid an official hiring freeze, in what many assumed to be a bid to secure votes by the political parties controlling the various ministries.

On election day that year, some voters spoke openly of waiting until after 6 p.m. to go to the polls because the price of the bribes offered by political parties would increase throughout the day.

Now, like everything else in Lebanon, the practice of pre-election clientelism and vote-buying has adapted to the economic crisis.

In 2022, with the collapse of the state, election observers said, clientelism has moved to the private market, with NGOs and wealthy individuals connected to political campaigns taking the place of the ministries that used to hand out favors; meanwhile, the cash price of a vote has decreased.

The kind of state-centered clientelism that was previously widespread “seems to have diminished because of the fact that the resources that have been run through state institutions have been depleted,” said Sami Zoughaib, economist and research manager at The Policy Initiative, a local think tank. “However, now there seems to be a higher reliance on private channels — cash transfers to people, food baskets.”

Prospective voters and those monitoring the elections said there has been a boom in candidates and parties providing all manner of services to prospective voters, from grocery vouchers and food boxes to hair styling, solar lighting and fixing potholes.

Chawki Rifai, an activist in Akkar aligned with the thawra (revolution)-affiliated opposition, said that five of the eight lists in the North I district have been actively distributing favors or outright buying votes.

“Some candidates would get people out of jail, others would give food boxes … Some get rice, some get sugar, some get a car for the person, some give solar power systems,” he said. One candidate had used his wasta (connections) to get NGO jobs for supporters, Rifai said. “Each one has a speciality in something.”

The Lebanese Association for Democratic Elections has issued regular reports on instances of potential clientelism in the months leading up to the elections. The examples they cited cover all areas of Lebanon and political factions.

• In various areas, including the South and the Bekaa, Hezbollah distributed fuel, food rations and cards allowing their holders to buy discounted groceries. It also gave a generator to the municipality of al-Bireh in Akkar.

• In Tripoli, candidate Ihab Matar with “The Real Change” list supported by Jama'ah Al-Islamiyah handed out bundles of bread with his name printed on the bags.

• In the Chouf-Aley district, the Progressive Socialist Party handed out medication and made a $160,000 donation to a Druze orphanage.

• In Beirut II, a hotly contested district given the absence of Sunni leader Saad Hariri from the elections, the Makhzoumi Foundation run by businessman and incumbent MP Fouad Makhzoumi of the National Dialogue Party gave out grocery vouchers, installed solar lighting and held a “cosmetic day” where it offered hair styling at a “symbolic cost.”

• The Lebanese Forces distributed envelopes of money in the Christian-majority town of Andaket in Akkar, ostensibly for the occasion of Easter; while the Kataeb distributed Easter food rations of eggs and whole chickens in Koura.

In at least one case, public officials openly encouraged candidates to finance infrastructure projects ahead of the elections.

After the Transportation and Public Works Ministry authorized Marada Movement’s Joseph Michel Najem, a candidate in the elections, to repave a road in Batroun at his own expense, Public Works Minister Ali Hamieh made a pitch for other candidates interested in repaving roads to apply for permits.

“Anyone can come now before the parliamentary elections and say, ‘I want to help repave a road,’” Hamieh said in an interview with the Spot Shot Video news platform. He acknowledged that “people will say you’re doing an election advertisement,” but dismissed the criticism, adding with a tongue-in-cheek smile, “This is the best time to fix roads.”

When contacted by L’Orient Today, a spokesperson for the Public Works Ministry said he could not provide information about how many people had applied to repave roads since the announcement.

‘A thin line between humanitarian aid and clientelism’

Lebanon’s election law clearly states that it is illegal for political campaigns to provide money or services to potential voters during the electoral period, which begins with the opening of the nomination period for candidates and ends when the ballot boxes are closed. Article 62 of the law prohibits “the provision of services or the payment of funds … including but not limited to: contributions, in-kind and cash assistance to individuals, charitable, social, cultural, family, religious or other organizations, sports clubs and all official institutions.”

However, the next paragraph contains a loophole. Such payments and “aid shall not be prohibited if they are submitted by candidates or institutions owned or run by candidates or parties who have submitted them in the same size and quantity on a regular basis for at least three years before the start of the campaign period.”

This means that candidates and parties that have pre-existing NGOs or charitable operations can continue to provide services while they campaign without necessarily running afoul of the law.

Aly Sleem, executive director of LADE, said in his view, this provision was drawn up to “legalize bribery” and give advantages to large political parties and candidates, many of which have associated NGOs.

“To them, they are not violating the law — to us it’s vote-buying,” he said.

Halim Shebaya, executive director of the Arab Association of Constitutional Law, noted that the provision in the law gives candidates plausible deniability.

Furthermore, he said, the fact that amid the economic crisis there is a greater level of need for services in the population makes it more difficult to pinpoint what kind of assistance is and is not legitimate.

“There's a very thin line at this point between humanitarian aid and clientelism,” Shebaya said. With much of the population in dire need of essential items like medication, “paradoxically, politicians are able now to help citizens navigate a crisis that they themselves caused,” he added.

The timing of the elections, coming immediately after the Ramadan and Easter holidays, also gave candidates a plausible reason to provide extra assistance.

While Christian parties made Easter distributions in Christian-majority areas as noted above, in Sunni-majority Tripoli, many of the candidates handed out food boxes or supermarket vouchers during Ramadan, said Fouad Jindi, the manager of a grocery store in the Bab al-Tabbaneh neighborhood.

“There’s nothing new in that, the payment always happens,” he said. But now its price tag has gone down.

LADE’s Sleem said that the price of a vote, in dollar terms, has indeed decreased from 2018 to 2022.

“In the afternoon on election day of 2018, a vote would be $500,” he said. “Now it’s reaching $100 or $150… The amount itself has decreased but the value makes the difference” because people are more in need of the funds, he said.

As the election has approached, some said, political machines have increasingly shifted from giving in-kind assistance to outright bribery.

Rifai, the Akkar activist, said, “One month ago they would give food boxes from the supermarket, rice and sugar and salt and so on, but now it’s easy to give money, and people want money more.”

The payment, he and others said, is often distributed via locally influential figures who are trusted by the political parties.

“The payment goes to certain names that are known [to the parties], not to all the people,” Jindi said.

These figures are tasked with ensuring that the recipients of the payment actually show up and vote for the designated candidate — although the system is not foolproof. One registered voter in Tripoli, who spoke on condition of anonymity, told L’Orient Today that he had sent a photo of his ID as a favor to a friend who would collect LL2 million from a political campaign for each person he signed up to vote for their list; however, he said he will not vote for the list in question.

Tarek Fellah, 78, who was manning a campaign office for Ashraf Rifi in Tripoli, said that some of the candidates were offering LL2 million before the election and another LL2 million after for a vote.

“This is what I’ve heard — I haven’t seen them with my eyes,” he said. When asked if Rifi was among those paying, he said, “That I don’t know, I haven’t seen it.”

A registered voter in Beirut II who returned from Germany to cast her ballot because she had not registered to vote overseas and who spoke on condition of anonymity said she had gotten a call at her family’s home from someone purporting to be working for one of the campaigns running there.

In some cases, Zoughaib said, campaigns have taken the reverse approach and paid those who they know plan to vote for opposing candidates not to vote, confiscating their IDs until after election day to ensure that they hold up their end of the bargain.

As widespread as the practice of vote-buying reportedly is, watchdogs said there has been little attempt to enforce the law.

“What are the measures that have been taken by the supervisory commission? Nothing so far,” Sleem said, noting that the Supervisory Commission on Elections, which is, in theory, tasked with following up on election violations, has yet to receive any of the funding that was allocated to it.

Nadim Abdelmalak, the head of the commission, was unavailable for comment when contacted Friday.

A delegation from the European Union is monitoring the elections, but will issue its report on any potential violations its observers find on Tuesday of next week, after the polling is completed.

Zoughaib said that the practice of clientelism is one side of the coin when it comes to parties’ efforts to influence the vote, with the other side being intimidation.

BEIRUT — In the leadup to the 2018 parliamentary elections, some 5,000 people got public sector jobs amid an official hiring freeze, in what many assumed to be a bid to secure votes by the political parties controlling the various ministries. On election day that year, some voters spoke openly of waiting until after 6 p.m. to go to the polls because the price of the bribes offered by political...