Public sector employees mobilized on May 15 should receive 3 to 3.6 million lira each, with transportation costs not covered. Many consider this insufficient, given the effort involved and currency depreciation. 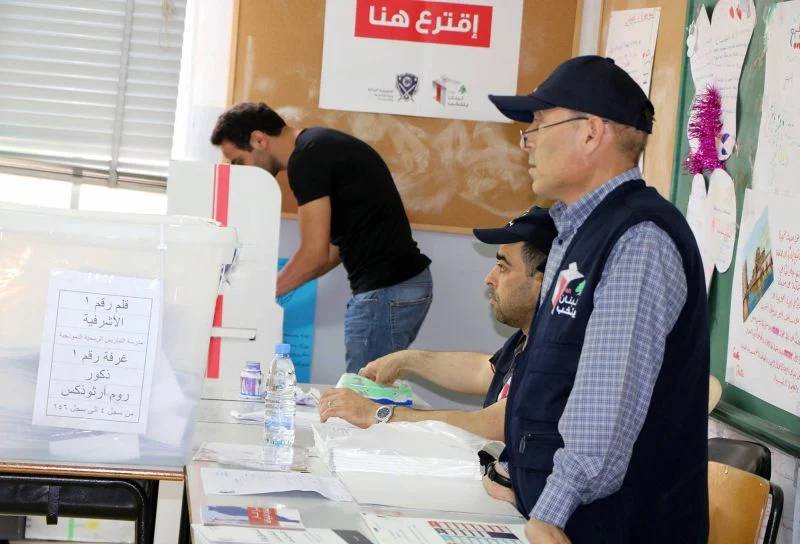 Officials at a polling station in Ashrafieh during the 2018 elections. (Hassan Assal/Archives JLO)

Could civil servants’ refusal to work on election day hamper the smooth running of the May 15 polls? Many public sector employees who are normally mobilized to manage polling stations — including a large number of teachers in state schools — do not seem thrilled with the idea this year, though they are paid for the work. On the job from the morning of May 14 until the vote is counted on the evening of May 15, civil servants expect to be paid between 3 million and 3.6 million Lebanese lira each (about $111 and $134, depending on the parallel market rate of about 27,000 lira to the greenback).

On the other hand, separate coverage of transportation costs is not guaranteed, which fuels some civil servants’ reluctance, given the current price of gasoline, especially since they may be posted far from home. Faced with this situation, some public sector employees have decided to skip the legislative elections, though they are only allowed to withdraw “in cases of force majeure.” But it seems that the authorities have turned a blind eye this year. This is shown by the case of Mayssa,* a Beirut public school teacher, who simply chose to ignore the authorities’ summons.

“I received a paper telling me that I had to work on May 15, but I haven’t given any sign of life," says this teacher in her fifties. “If they call me again, I will find an excuse.”

“The amount has increased considerably in lira, but it is ridiculous in view of the currency depreciation. The problem is that we can be assigned to any region,” Mayssa told L’Orient-Le Jour. “We must first go on the Saturday before the Sunday of the elections to the qaimaqam (subdistrict governor) where we are assigned, to collect the bundles and voters lists, before going to deposit them in the polling station. You can choose to sleep there or go home Saturday night, but [if you return] you’ll have to travel kilometers again on Sunday morning and spend money on gas. On Sunday night, we return to Beirut in the middle of the night, often using impassable roads.”

“Many teachers have refused to participate this year for various reasons,” Mayssa said. “Some of them will still go despite the fatigue and the long days because they really need the money and times are hard.”

Ibrahim Nahhal, of the League of Employees of the Public Administration, notes the existence of “a climate of dissatisfaction with election work.” He also said that “a large number of civil servants refused to work on May 15,” without giving precise figures.

“Before the crisis, working on election day was quite profitable. Today, the amount that the authorities give us is useless. It is not even enough to pay a five-amp generator bill,” he says. “If you are sent to an office in the middle of the country, you have to spend a lot of money on gas. And if you decide to sleep on site, you have to pay for accommodation as well. So there is a financial loss at all levels.”

The civil servant fears that he will not be able to benefit from the promised amount of money, because of commercial bank’s withdrawal restrictions. “The banks will not allow us to recover the entire amount in cash,” Nahhal sighs.

Will civil servants’ exasperation affect the smooth running of the election? When asked by OLJ, a Ministry of Interior source, who requests anonymity, suggests that the administration has been flexible with public sector employees. “Those who asked for a change in their place of assignment were granted. Moreover, the lists of civil servants are ready and I do not think that there will be a shortage in the number of people mobilized for the vote.”

On the law enforcement side, rumors are rife that some members of the Internal Security Forces (ISF) will refuse to work on May 15, again because of what they consider inadequate pay. “If I’m posted far from home, I won’t go,” said an ISF officer, speaking on condition of anonymity, despite the sanctions he could face if he violates his superiors’ orders.

“Many police officers want to abstain, as do teachers, especially since they have to travel by their own means,” a source close to the security services told our newspaper. According to this source, the authorities “could compensate the ISF up to 1.5 million lira for their mobilization on election day.” The source added that “the police could even be assigned near their home towns to avoid costly travel.”

Contacted by OLJ, an official within the ISF said that he was unaware of any additional remuneration this year, although he acknowledges that “in 2018, police officers received a bonus for their mobilization during the parliamentary elections,” which had not been done before, without specifying how much was paid. “I’m not aware of how much could be given to them this year,” said the official, who denied rumors of discontent in police ranks.

“We will all be mobilized. It is a national duty,” he added, saying he did not know if police officers would be assigned to areas near their homes.

The problem of transportation does not seem to be an issue for the army, which has its own bus network. “We recently received a donation of 60 buses from France, which allows us to transport our soldiers from their homes to their duty stations throughout the country,” said an army official who requested anonymity. “Our buses even serve remote villages.”

There is no financial bonus for army personnel serving at election sites. “We will all be mobilized on election day,” said the official, “but we are not paid extra to do so. Being on the ground to ensure the security of the election is part of our job.”

*The first name has been changed.

This article was originally published in French in L'Orient-le Jour

Could civil servants’ refusal to work on election day hamper the smooth running of the May 15 polls? Many public sector employees who are normally mobilized to manage polling stations — including a large number of teachers in state schools — do not seem thrilled with the idea this year, though they are paid for the work. On the job from the morning of May 14 until the vote is counted on...