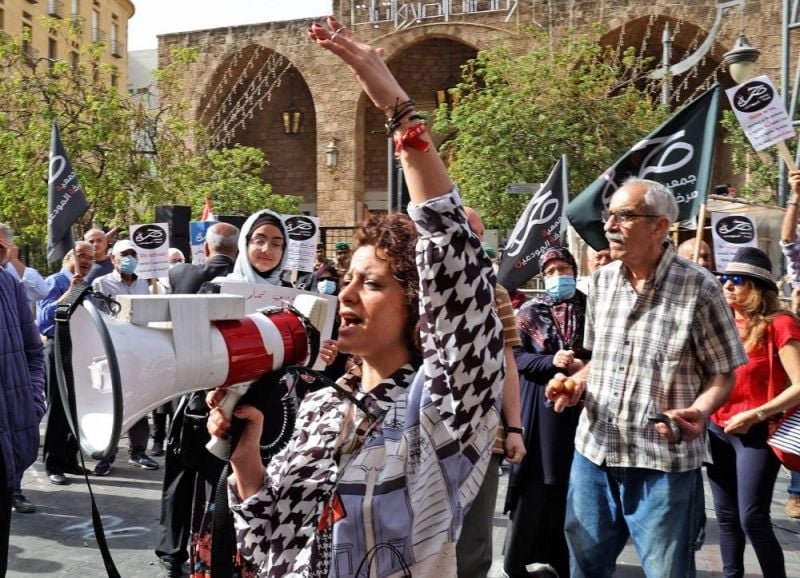 Lebanese protesters rally against the draft law on capital control, outside the Parliament building in Downtown Beirut on April 26, 2022. (Credit: Anwar Amro/AFP)

New week, same old story. The ending for the capital control saga continues to elude Lebanon’s shrewd and creative politicians. Two years of endless back and forth between the government and Parliament are still insufficient to pen an adequate version of the capital control law. No rush, only $10 billion remain at the central bank.

The term “original sin” has myriad different connotations, religious, economic and otherwise. However, when speaking of the current situation in Lebanon, the original sin can be traced back to the first week in November 2019, when banks reopened after closing for two weeks. That one mistake set in motion a series of events that kept the country from ever regaining its footing. A timely capital control law would have meant the retention of $5 billion to $10 billion by the system, which in turn, would have spared the Lebanese from witnessing the loss of 90 percent of the value of their national currency, saving the government from wasting billions in subsidies. All that money could have given the country enough time to get back on its feet without having to plead for $3 billion from the International Monetary Fund.

This is the sixth version of the draft law. The first version was proposed to Parliament in May 2020 but nothing came out of it. The second version was prepared by the Finance and Budget Committee in June 2021, then amended by the Administration and Law Committee into version three in July 2021, this version remains in the drawers of the committee. Version four was a stealth attempt by MP Nicholas Nahas to get the draft sneaked to Parliament in December 2021, and the fifth version was another attempt by Deputy Prime Minister Saade Chami to do the same. The sixth version is the one sent by the government to Parliament on March 30 and that is being discussed by the Parliamentary Joint Committee.

Among the causes that managed to rally the Lebanese against the establishment’s ad-hoc policies, the issue of capital controls ranks high on the list.

The Parliamentary Joint Committee failed to achieve quorum on Tuesday after protesters took to the streets and blocked MPs from making it to Parliament.

The many versions of the draft law, all suffered from one major flaw. They all sought to absolve the banking sector from all previous sins related to money transfers. This would deny the depositors from ever being able to sue the banks for abuses and would put an end to all such motions already initiated.

Another issue that is fueling protesters’ anger is related to the consolidation of power in one committee. Not only is this committee composed of members seen as responsible for the country's demise — Prime Minister Najib Mikati, central bank Governor Riad Salameh, among others — but these people will be designated as final arbiters for all things connected to money transfers and purchases of foreign currencies.

The Beirut Bar Association head Nader Gaspar also said on Wednesday that protests will continue against the draft law in its current form and that “lawsuits against some banks are ready and the judicial path will be followed until every citizen’s rights are guaranteed.”

The probability the general assembly would vote on the draft law before the elections is rather slim. Most of next week is riddled with holidays, leaving the parliamentary committees and Speaker Nabih Berri with a narrow window of opportunity until May 15. But then again, who would want to vote on it? That’s as toxic as it gets to anyone's re-election chances.

In what has become an end of month ritual since December, the central bank extended once again the deadline for Circular 161, until the end of May. However, the desired effect of its renewal is being lost on the market, as the gap between the parallel market rate and the Sayrafa rate continues to widen. Only the lucky few with privileged access can celebrate the event by making LL5,000 per $1, or 20 percent in profits via arbitrage by buying at the Sayrafa rate and selling on the parallel market.

Banks have either reduced the amount of dollars they are selling to their clients, or completely stopped. They blame the central bank for the lack of access to US dollars. Governor Riad Salameh continues to reassure that it is business as usual and that the problem rests with the banks. It is all so familiar now.

“The banking restrictions are a destruction of people's plans and dreams, while on the other hand we know the bankers and their families live abroad, go to the best universities and own penthouses,” said Fouad Debs, a lawyer and co-founder of the Depositors Union, an advocacy group representing the interests of Lebanese depositors.

“A few [Lebanese elites] are living la vida loca abroad while the rest of the population drowns,” Debs added.

If you want to know how the absence of capital controls allowed rich and politically connected clients to move their money, read Albin Szakola’s detailed expose of the financial shenanigans in “The multi-billion dollar question: Tracing Lebanon’s growing offshore wealth amid financial collapse”

And if you haven’t heard, it seems half of the Lebanese are looking to leave the country for better opportunities abroad. It is just surprising the number is not closer to 100 percent. Theoretically this would be impossible, since Carlos Ghosn is forced to stay behind after France issued an arrest warrant against him.

New week, same old story. The ending for the capital control saga continues to elude Lebanon’s shrewd and creative politicians. Two years of endless back and forth between the government and Parliament are still insufficient to pen an adequate version of the capital control law. No rush, only $10 billion remain at the central bank.The term “original sin” has myriad different connotations,...