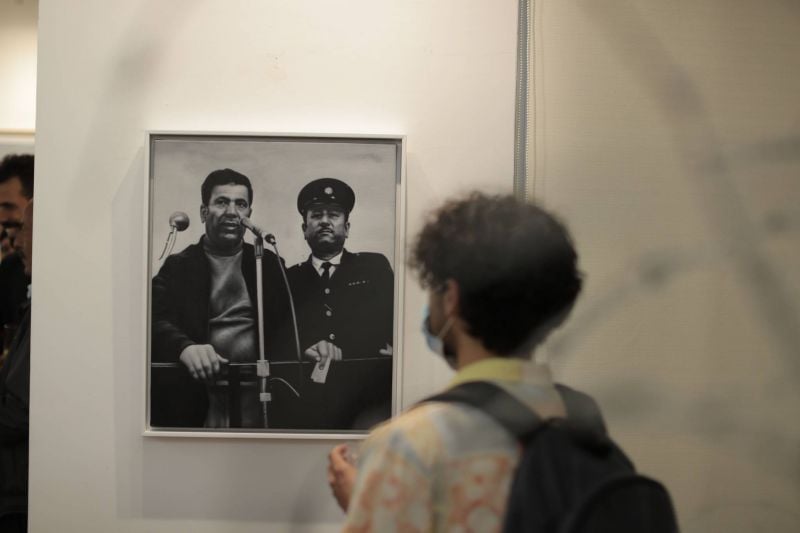 "I'm the Court of Haifa" (2013, oil on canvas), by Aissa Deebi, Palestinian artist currently based in Geneva. This piece depicts Daoud Turki pleading before the Israeli court in Haifa in February 1972. The case was dubbed "Daoud Turki's speech" by the Hebrew press at the time. (Credit: Rami Maher /Courtesy of Institute for Palestinian Studies)

BEIRUT — An inaugural art exhibit was held this month in the newly-opened gallery of the Institute for Palestinian Studies, a center based in Beirut that has traditionally focused on research and analysis. By widening its scope towards exhibiting and discussing art, the institute hopes to attract a new audience to the Palestinian cause, which has largely fallen by the wayside in the region.

The first exhibition to be held in the new gallery, which is open throughout the month of April, gathers works by international artists focused on the plight of political prisoners, paying special attention — but not exclusive — to Palestinian prisoners held by Israel.

In 1974, the Palestinian National Council designated April 17 as the National Day for the Palestinian Prisoner, a day which is still observed by Palestinians in both Palestine and the diaspora. According to the Palestinian NGO Addameer Prisoner Support and Human Rights Association, there are currently some 4,450 Palestinian political prisoners held in Israeli detention centers, 160 of which are children.

The exhibit comes at a time when calls grow for the release of Palestinian prisoner Ahmad Manasra, who has been imprisoned since he was 13 for being with his cousin who allegedly stabbed two Israeli settlers in 2015, and who is now living with serious mental health problems. While an Israeli court has recently dropped the “terrorism” designation from Manasra’s case, he has suffered greatly while in custody. A video of his interrogation emerged showing harsh treatment at the hands of Israeli authorities. 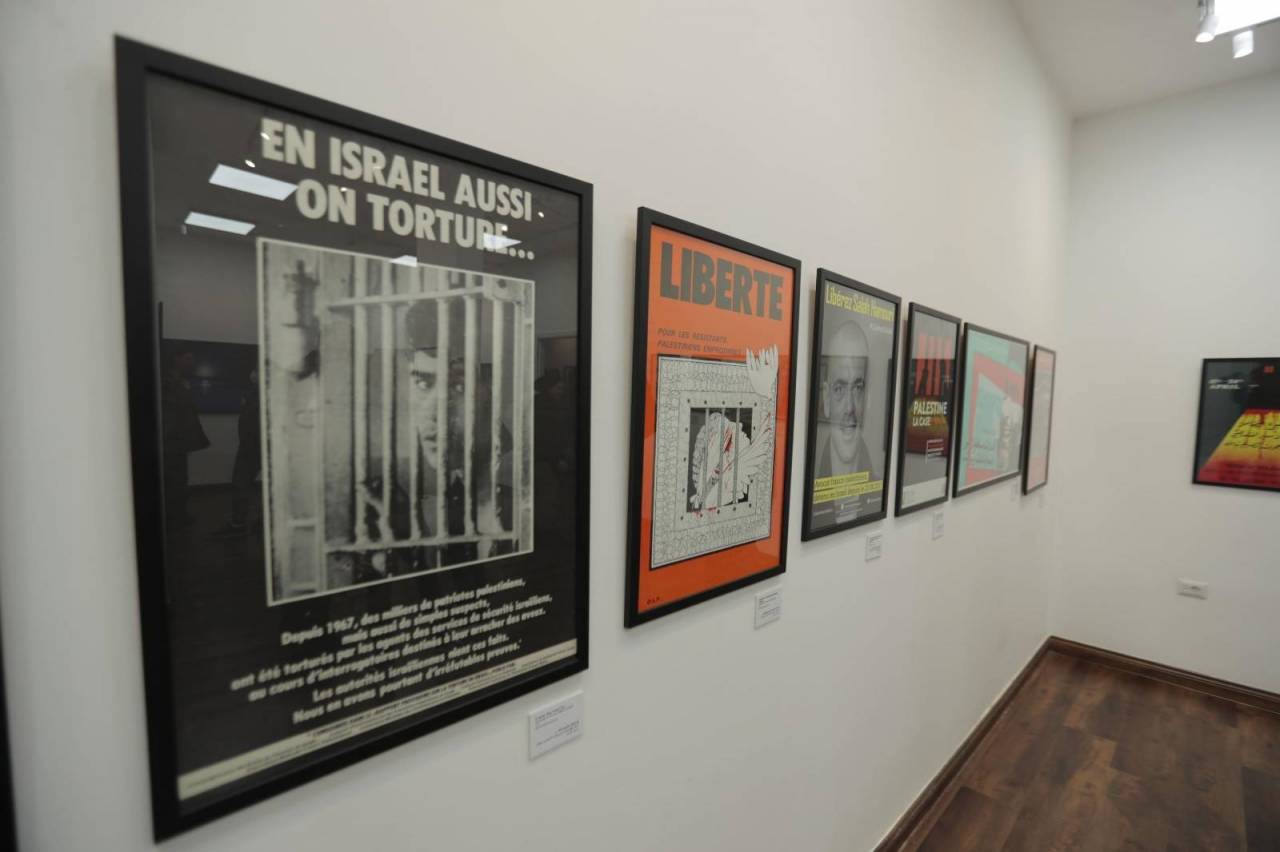 Anis Mohsen, editorial secretary and researcher at the Institute for Palestine Studies, believes that the Palestinian prisoners issue gets less attention than other issues related to Palestine, such as illegal settlements, even though it is one of the oldest.

“The issue of the Palestinian prisoners started after [the war of] 1967, when many Palestinians were captured who are still in prison to this day, while others died inside without ever having known freedom again,” Mohsen says.

A friendly, soft-spoken man, Mohsen, a Palestinian refugee himself, visibly winces when asked about the target audience of the exhibit.

In recent years, an increasing number of Arab countries have pursued rapprochement with Israel, but, Mohsen said, “Of course we are not targeting Arab governments, or any governments. We are focused on reaching the Arab people. Once they come to care for this issue [of political prisoners], they will also focus on the general issue of Palestine and Palestinian liberation, the interest in which is weakening in the Arab world.”

Through the work of 30 Palestinian, Arab and international artists, some of whom were political prisoners themselves, the exhibit includes paintings in different media, as well as sculptures, installations, videographic works, photographs and posters. The main idea behind the gallery space is to draw a new crowd in to learn about Palestinian issues in a more accessible and visceral way.

While the opening did draw a sizable crowd of mixed nationalities, the majority of the artists, as Palestinians, were unable to travel to Lebanon because of the difficulties of obtaining a visa, and other factors. In fact, only a handful of the artists were actually present, most of them from non-Arab countries.

Of the foreign exhibitors, the majority hailed from the Netherlands, a country whose government is known to be steadfastly pro-Israel. One of them, Ingrid Rollema, is a visual artist and international lawyer who visited Gaza for the first time 30 years ago, after she heard that a doctor named Fathi Arafat, founder of the Palestine Red Crescent Society and brother of Yassar Arafat, who had seen the positive effects of art therapy in severely traumatized children, was looking for artists capable and willing to work with youth in Gaza.

Rollema has been coming back ever since, and even started her own foundation in Gaza called the Hope Foundation, which works in close collaboration with the Palestine Red Crescent Society and the Dutch Red Cross. The Hope Foundation aims to help traumatized and handicapped children in Gaza by offering lessons in art and culture.

The Dutch artist and activist knows first-hand how art can engage a different public with a cause and even influence public opinion.

“In April, just before the relentless bombing of Gaza, people would still tell me, ‘Just let it go, what you are doing won’t have the desired impact, the situation is hopeless over there,’ and a month later they were generously donating to our emergency fund, which we set up for people in the creative sector to continue their work, especially with children,” she said.

A sculptor and theater actress who later started experimenting with other types of visual art, Rollema exhibited a projection of an artwork at the gallery called a “Nomadic Memorial”, consisting of 1430 unique books that have been placed on the floor in battle formation. Each copy bears the name of one of the 1,430 victims (1,417 Palestinians and 13 Israelis) of Operation Cast Lead carried out in Gaza from 2008 to 2009.

Wandering around the gallery, the artworks seemed to organically address various overarching themes. One such theme, which might not be not immediately apparent to visitors when thinking about the plight of Palestinian prisoners, is Palestinian wildlife and plants, which have a strong presence in this exhibition. Abdul Rahman Katanani’s piece represents the olive tree and its deep-rooted significance in the Palestinian consciousness, by replacing its leaves and fruit with barbed wire. Amer Shomali painted an ode to a cactus plant, which nourished the six Palestinians, hailed as national heroes, after they managed to escape the Gilboa prison in September of last year and hid out in the wilderness.

Mohsen hopes that the result of exhibitions and activities like these, in tandem with raising awareness through research and publications, a similar shift in public opinion will manifest in the Arab world, “just like in the West.”

When asked what exactly Western countries have done to support Palestine, Mohsen says: “Again, I am not talking about governments. Support for Palestine by the people is rising in the West. Just look at the BDS movement. Once the public opinion shifts, politicians feel pressured to go along. That’s how democracy works, no?”

Established in Beirut in 1963, the Institute for Palestine Studies describes itself as “the only institute in the world exclusively devoted to documentation, research, analysis and publication on Palestinian affairs and the Arab-Israeli conflict.” IPS’s library, located at the Institute’s headquarters in Beirut, comprises four stories holding more than 79,000 volumes in addition to hundreds of periodicals and newspapers in Arabic, English, French and Hebrew.

Rana Anani, who curated the exhibit, says that, rather than exclusively Palestinian, the Institute is Arab, which she says is reflected in the make-up of the institute’s board. In addition to Palestinian and Lebanese public figures, academics and businesspeople, the Board of Trustees includes members from Yemen, Iraq, Kuwait, Algeria, Qatar, Egypt, Bahrain, the UAE, Morocco and Saudi Arabia. 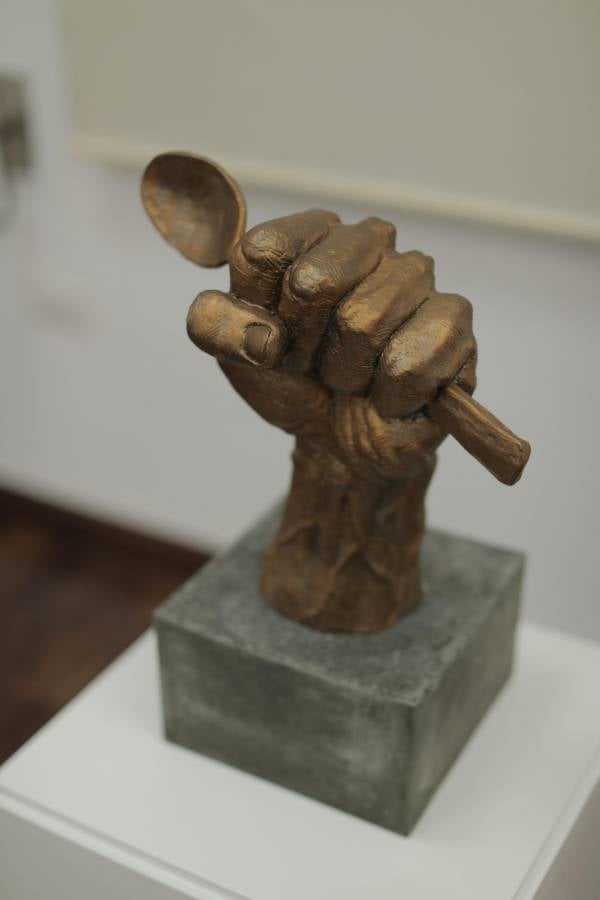 The institute’s US branch has exhibited and auctioned off works donated by both Palestinians and artists from all over the world in the past, but it’s a new development to be collecting, auctioning and displaying art in Beirut. The works that were on display at the inaugural exhibit are not for sale; some of them are on loan while others will be added to the institute’s collection.

Even the circumstances of the exhibit itself illustrate not only the plight of political prisoners but that of all Palestinians.

“None of the artists from Palestine were able to come here and present their artworks,” Anani says. “This tells you enough.”

It’s precisely because of this deprivation of agency experienced by Palestinians in their homeland that the Institute decided to add a different route to reach people and amplify Palestinian voices.

Mohsen believes the approach can appeal to people of vastly different backgrounds who care about safeguarding human rights.

“Let me tell you a story,” he says. “In France, I met my brother’s neighbor, an Auschwitz survivor. At the time he was 94 years old but he lived to see past a hundred. This man, with all the atrocities that befell him, was a big supporter of Palestine. When I asked him why, he said. “It’s precisely because I am Jewish that I’m against Israel and the way it treats the Palestinians.”

The "Salute to the Prisoners of Freedom" exhibition will be open daily throughout the month of April from 12-6 p.m., except for Sundays, at the Institute for Palestinian Studies.

BEIRUT — An inaugural art exhibit was held this month in the newly-opened gallery of the Institute for Palestinian Studies, a center based in Beirut that has traditionally focused on research and analysis. By widening its scope towards exhibiting and discussing art, the institute hopes to attract a new audience to the Palestinian cause, which has largely fallen by the wayside in the...