In Benafoul, suspicions of mourning villagers compete with the official line

Ali al-Rez, son of the town mayor and an Amal Movement member, died of his injuries. Residents are still in shock. 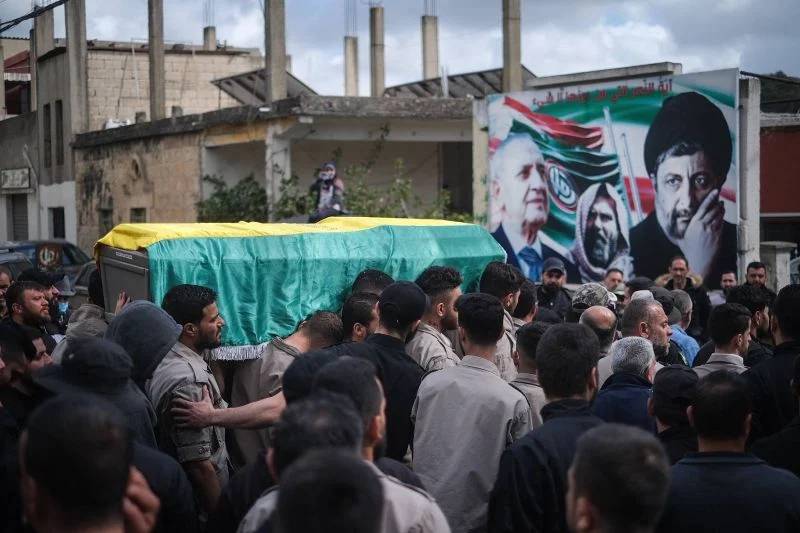 Two sporting trophies lie on the ground. Around the ruins of a building destroyed by Tuesday’s explosion in the village of Benafoul, near Saida, a group of residents — some wearing T-shirts or jackets bearing the Amal insignia — stand on the rubble, sealing off the area. The two floors of the ruined building atop each other. Shards of glass, broken plastic chairs, shredded Amal and boy scout flags, burnt cars litter the ground. The perimeter of the explosion is all but razed.

The building housed Benafoul municipality and the headquarters the Amal-affiliated al-Rissala Scouts, the village’s de facto civil defense unit. The causes of Monday night’s powerful explosion are still unclear, but six people were taken to the Rai Hospital. Two are still in intensive care, while Ali al-Rez, the son of the mayor, died from his injuries.

Amal’s press release said that “around 2 a.m., an explosion sounded in a building adjacent to that of the municipality of Benafoul, part of which civil defense [and] al-Rissala Scouts occupies.”

The party explained that “according to preliminary information, a short circuit caused the explosion of oxygen cylinders stored in the building to treat patients with Covid-19 in the village.”

A source from Amal told L’Orient-Le Jour Tuesday morning that an investigation is underway to find the cause of the explosion, clarifying that reports that a rocket or a drone had caused the blast are only "rumors."

"The Amal movement will investigate the reasons behind the explosion alongside the security services," the source assured. A security source told Reuters the explosion was not an act of sabotage, but refused to give further details. Neither the Internal Security Forces (ISF) nor the Lebanese army provided information on the cause of the explosion Tuesday.

"Sometimes young people, scouts, spend their evenings in the center, other times there are cases of medical emergency," he told L'Orient-Le Jour. "It is not true that there is an ammunition depot, as some media have reported. The army and security forces arrived in the middle of the night and sealed off the area. We are awaiting the results of their investigation."

A man standing nearby asked the mokhtar to stop the interview. By midday, the army and General Security had left the area.

Standing at the entrance of the village, Walid* wasn’t convinced that oxygen tanks were responsible for the blast.

"I don't believe it," he said. “It's certain that there were weapons here.”

"But you're talking nonsense,” retorted a man accompanying him. “There's nothing there."

"I'm not against there being a military center," Walid insisted, “but not in the middle of a residential area.”

An unnamed source in the village, told L’Orient-Le Jour there would have been diesel, gasoline and some kind of solvent in the area.

"That's why it's better to stay away from the area," she said.

The tension is palpable in the village, and any theory contradicting the Amal movement line is not accepted.

"Some media have distorted the truth for political purposes, claiming that the center was an arms depot belonging to the movement," said Jamil Baalbaki, Ali al-Rez’s uncle. “We categorically deny this claim. We must take into consideration the magnitude of the tragedy and the pain of the people of this village.”

The residents are still in shock. Young boys gathered near the Rez family residence. Here, talk of the explosion is on everyone's lips.

"It was like an earthquake," says one 11-year-old boy, one of the scouts upset by the center’s destruction. "We studied karate and participated in many activities [there].”

In the aftermath of the blast, residents say they rushed into the streets, some screaming in fear. Others went to the scene to help rescue workers  Sarah was at home when the door of her house was ripped off.

"There were two power outages that night, and the explosion coincided with the second one. It wasn't one blast, but several in succession, culminating in a huge explosion. For a brief moment, we thought it was an Israeli bombing."

Drawn to her balcony by the cries of the residents, she learned that there was “an explosion in the center” and saw the firemen and ambulances approaching.

"It is a center where young people spend many evenings," she said. "Fortunately it was not the case that evening. Otherwise there would have been a massacre."

"That's where Ali's brother pulled him from"

Near the perimeter of the blast, residents watched the rubble through windows, now bereft of glass. It is not possible to talk to them, as directed by local authorities. Electrical wires littered the ground. Traces of blood was visible among the debris.

"That's where we found Ali," says a relative of the victim, who’d rushed to the scene after the blast. "It was his brother who removed him."

Rez had been visiting Lebanon from Qatar, where he has lived for about a decade. The fourth of five brothers, he is survived by his pregnant wife, whom he married about two years ago, and his young son.

"He came for Ramadan and was planning to leave after Eid al-Fitr," said Baalbaki, Rez’s uncle. He said Ali was returning from a soccer game when he saw the building burning.

"The first floor of the building was on fire, [the part] used as a center for scouts. The young people tried to put out the fire, which apparently spread to a room where there were oxygen tanks," Baalbaki continued, adding that the blast had propelled Rez 25 meters from the building. "It is a great loss. [Ali was] a good man, generous, loved by all, and the whole village mourns him today," he says, his throat tight. For his relatives and for Amal, Rez died a "martyr."

“He thought that the residents of the building were inside," says Sarah, a resident and friend of his wife. “He wanted to save them.”

All day Tuesday, residents did not cease in offering condolences to the family. The funeral was organized the same day. In charge of traffic control, the town hall blocked the road with a pole emblazoned with the Amal logo. A banner bearing Rez’s photo hung from the residence, where Amal flags fly.

Wrapped in the banner of al-Rissala scouts, the coffin is taken out of the ambulance.

"This family is made up of Amal supporters from the beginning," said a relative. The scouts, of whom Ali was a member before joining the movement, march with the coffin beneath a shower of rice. Young people in uniform follow their instructor as he guides them through streets adorned by portraits of Nabih Berri, Moussa Sadr and Hassan Nasrallah.

The pace is military, the music is martial. The sound of commemorative gunfire can be heard in the distance. Those accustomed to such practices don't move, while others cower to avoid a stray bullet. The crowd recites prayers to the sound of drums.

*The name has been changed.

Two sporting trophies lie on the ground. Around the ruins of a building destroyed by Tuesday’s explosion in the village of Benafoul, near Saida, a group of residents — some wearing T-shirts or jackets bearing the Amal insignia — stand on the rubble, sealing off the area. The two floors of the ruined building atop each other. Shards of glass, broken plastic chairs, shredded Amal and boy...