Yet another version of a long-awaited capital control law is before Parliament this week, but what are the main points? 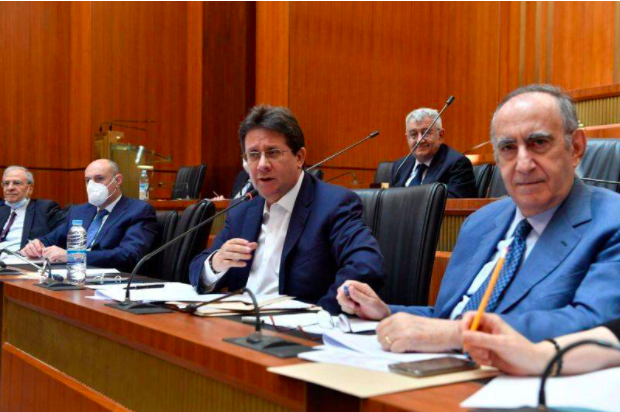 MP Ibrahim Kanaan, chairman of the Finance and Budget Committee, one of two parliamentary committees that will meet today to discuss yet another new version of the capital control law. (Credit: NNA)

BEIRUT — A joint parliamentary committee consisting of the Finance and Budget Committee and the Administration and Justice Committee will meet today at 10:30 a.m. to discuss a new version of the capital control law. Tomorrow, a session of the full Parliament is scheduled to vote on the law.

A leaked version of the draft capital control law circulated Friday on social media, and a source familiar with the document confirmed to L’Orient Today that it is the version to be discussed in today’s committee meeting.

This is the latest of several versions of the proposed law to make it to the parliamentary joint committee for discussion, albeit none have so far garnered the support of all the key stakeholders. The last iteration, proposed by MP Nicholas Chammas, was sharply criticized because it consolidated power in the hands of the central bank, gave a blank check to the banking industry on any previous or pending local or international lawsuits related to money transfers and differentiated between “fresh dollars” and pre-April 2020 foreign currency accounts.

There is also another version of the capital control law, which was less restrictive on depositors, that was finalized by the joint committee in July 2021, but that never made it to the general assembly.

The latest version, proposed by Deputy Prime Minister Saade Chami, also the head of the negotiating team with the International Monetary Fund, elaborated on the following issues.

What is in the new version?

The document states that a special committee will be formed to deal with the implementation of the capital control law, to be composed of the finance and economy ministers and the central bank governor, and chaired by the prime minister or another minister chosen by him.

According to Article 2, all international transfers will be restricted except for the following transactions: fresh dollar transfers (defined in the law as foreign currency transferred to Lebanon or deposited in an account after April 9, 2020), transfers by international organizations and foreign governments, Lebanese government and central bank transfers, transfers for export requirements, payment of healthcare expenses, transfers for the import of necessities and others to be determined by the special committee.

As per Article 4, banks will not be allowed to open new accounts except for the following cases: salary payments, pension and social assistance payments, accounts opened in fresh dollars for imports, accounts needed for the deposit of legal settlements funds, international transfers to residents, subaccounts in lira when clients convert foreign currency into lira and any other situation determined by the special committee.

Article 5 states that cash withdrawals, except from fresh dollar accounts, will be subject to a monthly withdrawal limit of $1,000 per individual either in lira or in a foreign currency. The currency denomination will be determined by the special committee. Debit card payments will be included in the $1,000 limit.

In matters related to foreign currency accounts, excluding fresh dollar accounts, only the following transfers can be executed: transfers for payment of healthcare expenses, transfer for imports, re-transferring of funds received by importers, conversion to lira, and cash withdrawals in foreign currencies within the set $1,000 limit.

The document also stipulates that receipts from exports should be in a foreign currency and should be deposited into an account in Lebanon. Furthermore, proceeds from exports will not be considered as fresh dollars and the future use of the collected funds will depend on the special committee.

The Banking Control Commission of Lebanon, a committee within the central bank, will supervise the proper implementation of the capital control law and will file periodic reports to the special committee. The draft law continues with the different penalties and fines that will be levied in cases of violation. Finally, the special committee will report quarterly to Parliament.

If passed, the law will be valid for five years. It could be reduced or extended by the government based on recommendations by the special committee.

Recent shakeup in the banking sector

On March 1, Audi Bank and SGBL were ordered by a London court to pay $4 million to a depositor. After the ruling, Lebanese banks started closing accounts held by British nationals, apparently for fear of suffering the same fate, prompting pushback by the British embassy in Lebanon.

Then on March 16, the judge of Beirut’s Enforcement Department, Mariana Anani, ordered the seizure of all assets, shares and properties of Fransabank on the back of a legal dispute between the bank and one of its customers. The ruling led to a two-day warning strike by banks on March 20 and 21.

It was also announced by Chami that during the week of March 14, the government met with the International Monetary Fund to discuss capital control mechanisms and banking secrecy.

Prime Minister Najib Mikati announced during a speech at the Doha Forum on March 26 that an IMF Fund delegation will arrive in Lebanon on Tuesday and that he expects a deal with the fund will be signed in the next two weeks.

Ibrahim Kanaan, MP and Chair of the Finance and Budget Committee, wrote in a tweet that he rejects the new version of the capital control law, and will also reject any version that does not protect the rights of depositors and that gives unrestricted powers to a committee composed of the government and the central bank. He added that the proposed version of the law is a radical departure from the one the Finance and Budget Committee had finalized.