Running in Lebanon’s legislative elections: A headache for opposition figures

There are many factors that would stop figures of the political opposition from engaging in a hard-fought battle, including the complicated administrative formalities, high financial risk and the complexity of joining forces 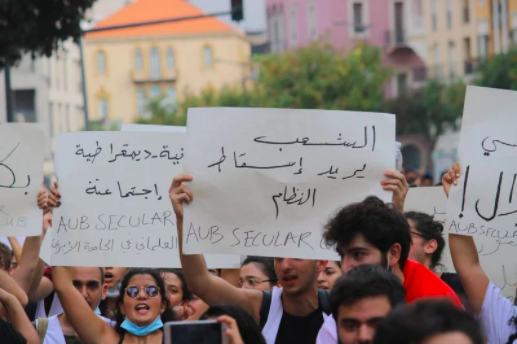 The clock is ticking. Only a few days separate us from March 15, which is the deadline for those wishing to run in the May legislative elections to submit their applications. A total of 517 people have officially applied to compete in the elections, according to the Interior Ministry today.

This number is relatively small for an election that so many in Lebanon perceive as an opportunity to revive political life..

For the opposition camp, the decision to run in the elections has not been exactly easy. This is because there are multiple challenges facing the figures advocating change, with the ruling class having a few tricks up its sleeve.

Some have struggled for many months, only to come to a decision at the last minute. They include activist and urban planner Ibrahim Mneimneh, who has finally chosen to stand as a candidate in the Beirut II district.

“I wanted to wait for the decision of the Beirut Touqawem collective as part of which I am campaigning. The activists chose me as candidate in an internal primary election,” Mneimneh said. However, he is still waiting to see whether the opposition forces will run on a joint list in this electoral district, he added.

It is indispensable for the opposition parties to join forces if they want to have an influential parliamentary bloc close to the protest movement. The electoral law requires securing a high electoral threshold, which could hit 20 percent in some districts.

Mneimneh is not the only one who was reluctant to run in Beirut II. Another independent candidate, who declined to be named, shared with L'Orient-Le Jour his experience.

“One must pay LL30 million to apply as a candidate, which is fifty times the minimum wage. It is also necessary to have a bank account for the electoral campaign, an accountant and a lawyer. The whole process costs around LL65 million, which is a non-refundable sum,” he said.

It is a major weight and risk amid a financial crisis. While he finally decided to stand as a candidate, he still does not know on which list he will run, similar to Mneimneh. “Discussions are underway with Fouad Makhzoumi,” he said.

For other opposition figures, the decision to take part in the ballot imposed itself. Yet, hurdles continue to impede their efforts toward formalizing their candidacy. Mohammad Alameddine has been preparing for weeks his electoral venture in the North II district (Tripoli-Minyeh-Dinnieh) on the “Entafed” (revolt) opposition list. However, his plans were thwarted by the impossibility of opening a bank account for his campaign.

“I have been trying to open an account since February, without success. The bank where my salary has been domiciled for 20 years has been refusing, justifying [their refusal] with management instructions to this effect. They even asked one of my friends, also a candidate, on which list he was running!” he said, angrily. Alameddine finally managed to open an account at another bank and the Finance Ministry.

“The banks are putting a spoke in the wheels of the candidates who are against the system. Most of the branches’ managers are affiliated with traditional parties and want to keep the opposition from achieving a breakthrough,” Assem Chaya, an activist and electoral expert, said.

In Lebanon, the links between the banks and the parties in power generate numerous conflicts of interest, which the opposition condemn regularly.

It is complicated to unite the ranks

The problems Alameddine is facing don’t end there. “Stats in the North II district indicate that the traditional parties are weakened. However, if the opposition does not run in unified ranks, it will not secure any seats in Parliament. However, for now, it seems that we are heading towards at least three opposition lists,” he said.

Former MP Ghassan Moukheiber seems to fret about the formation of lists. “For me, running in the elections is a moral duty,” he said. In the past, Moukheiber was a candidate on the Free Patriotic Movement’s list, but he is not a member of the Aounist party. In 2018, he garnered 2,654 votes.

“I have always been independent and I have broken with my former allies. In the May elections, I will be running on the opposition forces’ list. There is already an agreement with the National Bloc,” he said. However, it is not an easy task to form this list. “Discussions are underway to unify the thawra (revolution) movements in a single bloc. Then, we could discuss the possibility of a joint list with the Kataeb,” he hoped, and noted that the discussions have not yielded anything concrete yet.

As for the administrative formalities, he admitted that they are more like an “obstacle course, but not a serious obstacle,” he said.

Other potential candidates always weigh the pros and cons, despite the tight deadline. “For now, I am inclined to submit my candidacy. However, I have two conditions: rallying behind a single list for the opposition forces and consenting to a political project that echoes the demands of the thawra”, said Wassef Harakeh, a potential candidate in the Mount Lebanon III district ( Baabda), where efforts are underway to set up one of the largest coalitions of the opposition forces.

“Those wishing to run in the elections do not have much time to apply. The slow administrative work needs to be taken into account. For instance, the Finance Ministry’s civil servants show up for work two days a week only,” Chaya warned.

Ostensibly, other figures have the same doubts as Harakeh. This is the case for Nariman Chamaa, who ran unsuccessfully on Kulluna Watani’s civil society list in Tripoli in the 2018 elections. “I will not participate in this display,” she said. “I do not care about a Parliament seat when there is no genuine political project that would bring about change. In my humble opinion, these elections are tantamount to a defeat for the opposition,” she added.

If the opposition parties do not unite their ranks, the path toward Nijmeh Square is, indeed, another kettle of fish.

The clock is ticking. Only a few days separate us from March 15, which is the deadline for those wishing to run in the May legislative elections to submit their applications. A total of 517 people have officially applied to compete in the elections, according to the Interior Ministry today.This number is relatively small for an election that so many in Lebanon perceive as an opportunity to...