Here’s what happened yesterday and what to expect today, Friday, March 11, and over the weekend 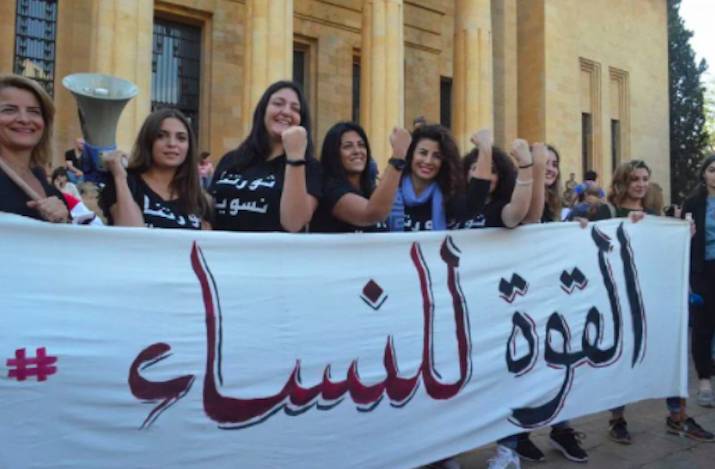 'Strength for women': Lebanese feminists rally during the mass demonstrations of 2019. (Credit: OLJ)

The United Nations Special Tribunal for Lebanon yesterday overturned the acquittal of two Hezbollah members allegedly involved in the assassination of former Prime Minister Rafik Hariri. The suspects, Hassan Habib Merhi and Hussein Oneissi, were found guilty on appeal, said the STL's presiding judge, Ivana Hrdlickova. On Aug. 18, 2020, the STL found another Hezbollah member, Salim Ayyash, guilty in absentia for his part in the truck bombing that killed Hariri and 21 others near the St. George Hotel in Beirut. Later in the day yesterday, Hariri’s son, former Prime Minister Saad Hariri, in a tweet, called on the government and security services to arrest the two suspects whose whereabouts are unknown. In the same tweet, Hariri added that he held “Hezbollah responsible for covering up the crime and the criminals that are members of the party.” According to a 2015 report by the New York Times, Merhi (b. 1965) has been a member of Hezbollah since 1986, and has been a commander in its special forces since 2003, playing a key role in the kidnapping of two Israeli soldiers in July, 12 2006, an incident that contributed to the outbreak of the July War.

Mount Lebanon Public Prosecutor Ghada Aoun yesterday issued a travel ban against the CEOs of five major banks. Those hit with a travel ban are Samir Hanna (Bank Audi), Antoun Sehnaoui (SGBL), Saad Azhari (Blom Bank), former Interior Minister Raya El Hassan (BankMed), and the head of the Association of Banks in Lebanon Salim Sfeir (Bank of Beirut). This comes after Judge Aoun issued a similar travel ban against BDL Governor Riad Salameh in January after a civil society group, The People Want to Reform the System, filed a lawsuit against him. After he failed to appear for questioning three times, Judge Aoun sent State Security to his homes and office last month to execute a warrant for his arrest. The officers were unable to locate the governor, however, leading Judge Aoun to question whether the Internal Security Forces were actively protecting him from arrest, a charge which the ISF has denied.

The Economy Ministry has once again raised the price of bread. The price of a small bread bundle (360 grams) was increased to LL6000 (+LL 500) while that of a medium sized bundle (825 grams) was increased to LL10,000, and the family-sized bundle now costs LL13,000, while its minimum weight was decreased by 625 grams to reach a new minimum of 1,125 grams. The Ministry blamed the hike on the removal of subsidies on sugar and yeast. The news comes amid increased uncertainty over Lebanon’s food security. On Wednesdays, the syndicate of traders and importers of fresh, chilled and frozen meat warned of meat shortages if Banque du Liban did not pay suppliers before Ramadan. Additionally, Russia’s Invasion of Ukraine has put Lebanon’s wheat supplies in jeopardy, with flour mills limiting deliveries to bakeries that produce Arab bread only. Two weeks ago Economy Minister Amine Salam said Lebanon’s wheat stockpiles will last a month and a half. Since then, a shipment of wheat has arrived at the Port of Tripoli.

In an aim to improve public transport, France will donate 50 buses to Lebanon. The news came yesterday during an official visit by French Transport Minister Jean-Baptiste Djebbari. He signed a memorandum confirming the donation during a meeting with his Lebanese counterpart, Transport Minister Ali Hamieh, and Prime Minister Najib Mikati. This latest donation will add to the existing 45 buses that the state already owns. Hamieh noted that one-third of these would run in Beirut, while the remainder would operate between Beirut and the North, South and the Bekaa. He also noted French willingness in “drawing up a legal framework for partnership between the public and private sectors, so that the state becomes the regulator and the private sector becomes the operator.” The news comes on the heels of a visit last month by Hamieh to France, during which said that his ministry was ready to sign a contract with any French company that can prepare a study to resurrect Lebanon’s defunct railway system. The railway system has not been operational since 1994, despite countless plans to reinvigorate it. The news also comes after the World Bank shelved plans to fund a Bus Rapid Transit system linking Tabarja and Beirut. The plan would have built dedicated buffered bus lanes that would be free from mixed traffic.

The Cabinet yesterday appointed Ziad Mkari as the new information minister. According to Annahar, Mkari, who hails from the Zgharta district, is close to the Marada Movement, and is a professor at the Lebanese University and the founder and CEO of design firm ARCA. He replaces former Minister George Kurdahi, who resigned on Dec. 4, 2021, in an effort to quell the diplomatic crisis between Lebanon and the Gulf monarchies. The rift began in October, following the airing of comments by Kurdahi that were critical of Saudi involvement in the war in Yemen. His subsequent resignation has yet to restore ties between Riyadh and Beirut despite mediation attapets by France and Kuwait. Education Minister Abbas Halabi had been serving as acting information minister since then. Separately, the government dropped proposals to implement megacenters for the upcoming May 15 elections. However, their use, as well as electronic voting, was approved for the 2026 parliamentary elections. Voting centers for members of the Lebanese diaspora in Ukraine were also dropped due to the ongoing invasion of the country by Russia. Additionally, the cabinet also agreed to approve the recommendations made by the committee tasked with studying the matter of the port silos, which are at risk of collapsing, but, according to activists, can be salvaged.

In case you missed it, here’s our must-read story from yesterday: “Lebanese women in Parliament: So many barriers and very little progress.”

Want to get the Morning Brief by email? Click here to sign up. The United Nations Special Tribunal for Lebanon yesterday overturned the acquittal of two Hezbollah members allegedly involved in the assassination of former Prime Minister Rafik Hariri. The suspects, Hassan Habib Merhi and Hussein Oneissi, were found guilty on appeal, said the STL's presiding judge, Ivana Hrdlickova. On Aug. 18,...