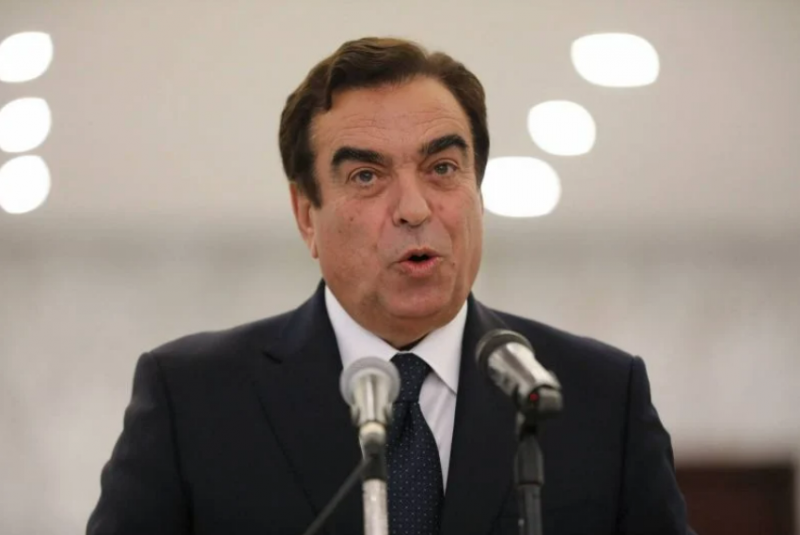 BEIRUT — Lebanese Information Minister George Kurdahi announced his resignation Friday, in a move intended to facilitate a possible resolution to a diplomatic crisis between Lebanon and the Gulf countries sparked by critical comments he made about Saudi Arabia’s intervention in the war in Yemen.

Kurdahi said that in the beginning he had refused to resign "to state that Lebanon does not deserve the way it's being dealt with, and even though Lebanon is weak right now, it is a country to be respected." He added that "the politicians who pushed me to resign are the ones who allegedly call for Lebanon's sovereignty."

However, he said, "I don't accept that the people of my country should be harmed because of me. Lebanon is more important than me... I wish that my resignation will serve its purpose and that it comes to the benefit of the Lebanese people."

Kurdahi’s resignation followed discussions between Lebanese officials and French President Emmanuel Macron on the eve of Macron's planned tour of the Gulf, which began today. Sources from Baabda said Macron could use Kurdahi’s departure as an argument for the lifting of the punitive measures against Lebanon during meetings with Saudi officials. However, it remains unclear whether the minister’s resignation will actually result in a rapprochement.

During Friday's press conference, Kurdahi said, "I met with [Prime Minister Najib] Mikati three days ago and I understood that my resignation could be beneficial before the upcoming visit of Macron to Riyadh."

Regarding the conflict in Yemen, which had initially prompted the diplomatic row, he said, "The war in Yemen, which caused all the damage, cannot continue. Eventually peace will come and I hope they remember that a man from Lebanon called for its ending, with all the love to Lebanon and Saudi Arabia and the Gulf countries."

Saudi Arabia, Kuwait, Bahrain and the United Arab Emirates, cut diplomatic ties with Lebanon late October, expelling Lebanese envoys to their countries and recalling their ambassadors after Al Jazeera aired an interview in which Kurdahi criticized the Saudi intervention in the war in Yemen, calling the war “absurd” and saying that the Houthis are “just defending themselves and not attacking anyone.”

Kurdahi, who was nominated by the Marada Movement, a Christian party allied with Hezbollah, was not yet a minister when the interview was conducted.

Saudi Arabia also banned all Lebanese imports from entering its kingdom. At the time, the Saudi foreign ministry noted that the punitive measures were not only a response to the "insulting" remarks on the Yemen war, but is also due to the influence of Lebanon's Iran-backed Shiite party and militia Hezbollah.

Hezbollah, which is allied with the Marada Movement, rejected calls for the minister's resignation saying that Riyadh orchestrated a diplomatic crisis and Lebanon “should not bow to foreign dictates.” With the party’s backing, Kurdahi had previously stated that his “resignation from the government is out of the question.”

Mikati asked Kurdahi in a speech he gave early last month to “follow his conscience” and take necessary steps to mend relations with Saudi Arabia.

In mid-November, Kurdahi indicated a possible shift, saying, "I haven't heard yet of any guarantees, not from domestic nor external powers, but if these guarantees come in...then I am ready.”

This was not the first time Kurdahi’s comments on regional politics had landed him in hot water. Ten years ago he was fired from the Saudi channel MBC for voicing support for the Syrian regime. “The revolution is a conspiracy designed to undermine Syria’s security,” Kurdahi said at the time.

Kurdahi embarked on his career in the 1970s with the state-owned TV channel Télé Liban, where he remained until 1978. From 1979 to 1992, he worked at Radio Monte Carlo in Paris, then at Radio Orient, before MBC FM radio in London hired him in 1994. After his departure from MBC in 2011, Kurdahi joined the Lebanese TV channel LBCI before he went to Egypt and hosted several shows.

BEIRUT — Lebanese Information Minister George Kurdahi announced his resignation Friday, in a move intended to facilitate a possible resolution to a diplomatic crisis between Lebanon and the Gulf countries sparked by critical comments he made about Saudi Arabia’s intervention in the war in Yemen.At the press conference where he announced his resignation, Kurdahi said the campaign against him...

UNICEF calls for end of celebratory gunfire in Lebanon