The Beirut port silos: A memory the state wants to tear down despite myriad preservation proposals 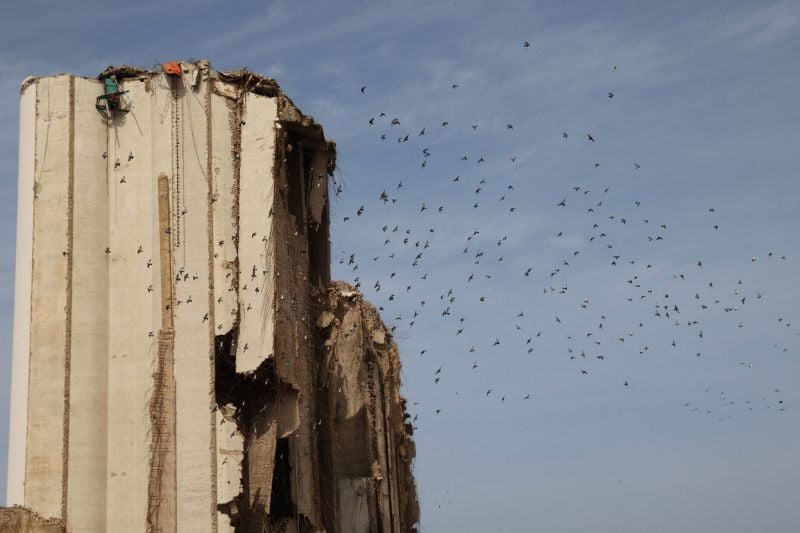 A flock of birds flies past Beirut port's damaged grain silos on Feb. 17, 2022, a year and a half after a deadly explosion there killed more than 200 people and destroyed large parts of the Lebanese capital. (Credit: Anwar Amro/AFP)

BEIRUT — A year and a half after the Beirut port explosion, the mangled shells of the massive grain silos that absorbed much of the shock of the blast remain as the most visible reminder of the tragedy.

Today, the silos present an oddly peaceful scene, with flocks of birds roosting on top of them and ducks paddling in the water below, but their future is the subject of fierce debate.

A number of Lebanese and non-Lebanese architects offered bold models for the Beirut Port, shortly after a large quantity of ammonium nitrate carelessly stored at the port exploded on Aug. 4, 2020, and destroyed the site. The architects’ models proposed idealistic but economically self-sustaining public spaces to preserve the memory of one of the biggest explosions in history.

Images of green fields and concrete plateaus surrounding the monument, that is the silos, circulated on social media but never came to life. On the contrary, the Lebanese government concluded that the silos should be destroyed.

Last month, Economy Minister Amin Salam announced in a press conference that the government intends to tear down the silos and construct new ones in a different area. Salam said that the economy and environment ministries have been collaborating on this file since as soon as it was found that the “silos need immediate action in terms of cleaning them to reach the stages of demolition and reconstruction.”

The northern part of the silos, unlike the southern part, is at risk of collapse. French engineer and silos expert Emmanuel Durand discovered that the northern bloc had leaned 250 millimeters in 120 days. In other words, the tilt is progressing at a rate of 2 millimeters per day.

By comparison, the Tower of Pisa in Italy was leaning about 5 millimeters per year until it was stabilized in 2001. In a report, Durand recommended the deconstruction of the structure’s northern section because its collapse seems inevitable.

The Beirut Urban Declaration initiative started a petition two weeks ago calling on the government not to proceed with a plan to demolish the Beirut port silos. The petition states that “the fate of the silos lies within the public interest,” adding “we demand that it be considered a vital space and a public right of the city.” Adding their voices to those opposing the silos' destruction, relatives of the blast victims gathered Sunday afternoon in front of the port to protest the state’s proposed demolition.

To date, 154 people have signed the petition, including Aline Kossaifi who said in the comments section of the form that she believes in the right to keep the memory of the blast until justice is served and the right “to keep it as a memorial for next generations [and] show them how corruption can destroy a country.”

The Beirut Urban Declaration, which was launched on Aug. 10, 2020, with the participation of the Order of Engineers and Architects to review ideas on reconstructing and rehabilitating heritage and protecting the social fabric of areas affected by the explosion, believe that the silos should be preserved as a monument that represents the memory of the horrific explosion that took place in Beirut.

“All engineers and specialists agree that the silos cannot be renovated for reuse because of how severely damaged they are,” said Jad Tabet, former head of the Order of Engineers and Architects and member of Beirut Urban Declaration.

However, that does not mean they must be torn down, he said.

He explained that silos are built on a pier foundation, which is a collection of large diameter cylindrical columns to support a superstructure, and that foundation was damaged by the explosion. “Thus, if we demolish them we would not be able to rebuild new silos above that area,” Tabet said, adding that preserving the silos would cost much less than demolishing them.

Paul Najjar, whose daughter was killed in the blast, told L’Orient Today's reporter at Sunday’s protest of his outrage at the prospect of the silos’ demolition. “They really have the nerve to bring up the issue of the silos now. It’s now that they wake up and realize that there is a danger? Three months before the elections?” he said.

All the leaders are trying to do is erase the memory of this disaster,” he continued. “Without these silos, I wouldn’t be here talking to you. These silos have saved lives,” he added.

The silos are believed to have shielded the western half of the city from part of the impact of the blast.

Tabet contends that “erasing memories is a tradition in Lebanon that started [in the] year 1860 [when a civil conflict broke out in Mount Lebanon between the Druze and Christians] and happened again in World War I when we erased the memory of the famine and absolved those concerned to create Greater Lebanon, and the same goes for the 1975 Civil War where amnesty was given to groups involved [and] then the commercial center was demolished and rebuilt to erase the memory once [and] for all.”

Neglecting historical memories allows for the repetition of the same horrific incidents, what Tabet calls the resurfacing of repressed memory. He added that erasing the memory is also a form of removing responsibilities and blame.

Drawing on a similar experience to illustrate his point, Tabet mentioned that when an American bomber dropped a five-ton bomb over the Japanese city of Hiroshima, four square miles of the city were destroyed, including the Hiroshima Prefectural Industrial Promotion Hall.

Japan rebuilt the city but preserved the industrial promotion hall in ruins to keep the memory of the tragedy alive, Tabet explained. The now-called Hiroshima Peace Memorial was designated a UNESCO World Heritage Site [in 1996] as a symbol of a catastrophe that happened and should not happen again, he added.

Ignored visions of an Aug. 4 memorial

On Nov. 20, 2020, Lebanese Design Director Carlos Moubarak issued a statement announcing that “Carlos Moubarak Architect is launching Beirut Memorial Park, a civic initiative embodied in a global and emblematic cultural act. It is envisioned as a powerful and symbolic project that crystalizes the torment of the nation, as the people’s tribute to the victims and to their beloved city.”

The project is a green public park that encompasses an upper plateau, which looks over the port activities and showcases a panoramic view of the Mediterranean and a lower plateau that includes open spaces. A black concrete monument that hovers above the crater left by the blast and sits next to the silos’ ruins includes a central space that has the names of the victims engraved in its structure.

The proposal also includes a museum that hosts design and artistic works and engages people in educational and cultural programs.

Tomas Reis, a Portuguese architect, also proposed a memorial park as a personal project. He envisioned that the remaining parts of the blast site be intertwined with a landscape. A circular field, half of which is green and half of which comprises concrete bridges passing over the Mediterranean Sea, surrounds the preserved silos.

Imagining the shock waves caused by the explosion, Reis wrote in a blog that he included many concentric lines in his designs, adding that “the inner slopes facing the explosion site, are paved with concrete and stone — the sterile mineral elements. These areas are about the past and form areas of introspection: the amphitheater and the main walk.”

“This project remembers the People of Lebanon,” he added. “The old silo ruins are preserved, as well as the explosion site — both elements become part of a sustainable landscape scheme that involves the local community.”

Palestinian architects and designers Alaa Abu Awad, Mais Bani Odeh, and Majd al-Malki, along with Diala Andonia from Bethlehem last year won the inaugural Phoenix Prize, an international forum to reconceive Beirut’s port after its destruction established by the Haifa Award for Architecture & Design program created by iDAR-Jerusalem association in 2020.

The silos, which shielded West Beirut from the explosion’s force, were the center point of the group’s design as they connected the site’s east part, which encompasses an industrial area, with public spaces on the west side.

This is an unintentional allusion to the historic line dividing Beirut during the Civil War. At that time, the port was the only place where people from both sides of Beirut could cross. Similarly, today families from different religious and sectarian backgrounds put away their differences and unite before the port for unified demands: “justice for the victims” and “preserve our memory.”

Gerges Berberi, Director General of Grain and Sugar Beet Stocks in the Economy Ministry told L’Orient Today that “the decision to destroy the silos was indeed made by the government, but the calls for tenders have not yet been launched.”

BEIRUT — A year and a half after the Beirut port explosion, the mangled shells of the massive grain silos that absorbed much of the shock of the blast remain as the most visible reminder of the tragedy.Today, the silos present an oddly peaceful scene, with flocks of birds roosting on top of them and ducks paddling in the water below, but their future is the subject of fierce debate. A number...