Lebanese women in Parliament: So many barriers and very little progress

The general political context in 2022 is definitely different from that of 2018. But will the new Lebanese Parliament consist of more than six women following the May 15 elections? 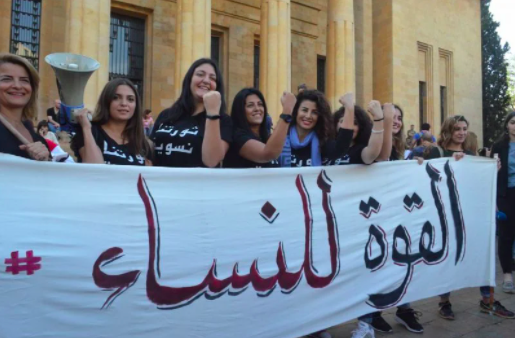 Strength for women, says this slogan, carried by feminists during the mass demonstrations of 2019. (Credit: OLJ)

While the deadline for the Lebanese interested in applying for candidacy in the 2022 parliamentary elections, which is March 15, 2022, arrives in a few days, only 47 women number among the 419 candidates who have so far officially submitted their applications.

This figure, which is equivalent to about 11.2 percent of the total number of candidates, may seem abysmally low. It is below women’s participation rate in previous legislative elections, which was 14 percent.

In 2018, 111 women out of 976 candidates applied within the deadline. This number dropped to 86 women of a total of 597 candidates following the formation of the lists. One must wait until April 4, which is the deadline for the formation of the lists, to see women’s participation rate in the legislative elections. This rate, however, does not affect women’s access to Parliament.

That is because Lebanon did not adopt an electoral gender quota that would enhance women’s participation in politics. Hence, only six women made it into Lebanon’s 128-member Parliament in 2018.

Since a women’s quota for the next legislative elections was not brought into debate in Parliament, it is only legitimate to ask if there will be a slim chance for improvement in the 2022 electoral landscape. The general political context is somewhat different from that of 2018.

March 8, which marked International Women's Day, presents an opportunity to look into the encouragements and impediments to women’s political participation, especially in the May 15 elections.

The vote will be held amid a severe political, economic and financial crisis, a dramatic depreciation in the local currency, an unprecedented impoverishment of the Lebanese citizens, and residual popular anger from the protest movement that broke out on Oct. 17, 2019. COVID-19 and the Aug. 4 Beirut blast have compounded these multifaceted crises, which have impacted the already vulnerable population gravely, most notably women.

“I don’t want to act as if I am a victim. In the battle for Parliament, we must be in a position of strength, in order to secure our place on the candidates’ lists.” It is with this can-do state of mind that Halimeh Kaakour, a founding member of Lana, which is considered among the opposition parties, is running for one of the two Sunni parliamentary seats in the Chouf district.

“I am trying to form a list that would include other candidates. I hope to succeed,” said Khouloud Wattar Kassem, an independent Sunni candidate in the Beirut II district. She is certainly facing difficulties “similar to any person who is not part of the traditional political caste, which led the country to downfall, and to any person who does not have billions [of dollars to spend on] the electoral campaign.”

The criticism she has faced mainly involved “daring” to run in a vote marred by a boycott by the Future Movement. “No one is bigger than the nation,” Kassem added, quoting former Prime Minister Rafik Hariri who was assassinated in 2005.

The difficult economic situation takes center stage when it comes to why women are very reluctant to submit their candidacies. The fee to apply to run in the elections amounts to LL30 million and is non-refundable. Although this sum is the equivalent to $1,500 dollars, it is very high for those who are paid only in Lebanese lira. That is particularly true if it is uncertain that they will run on a list and risk being dropped.

“Women have been widely impacted by the crisis, knowing that they generally have more precarious finances than their male fellow citizens,” notes Aly Sleem, executive director of the Lebanese Association for Democratic Elections, which monitors the electoral process.

In a country where women's labor force participation ranges from only 22 to 23 percent, as Ali Fakih, associate professor of economics at the Lebanese American University noted in January,“the high registration fees may discourage more than one,” Sleem said.

“LL30 million is a very large sum, [especially] when it is not certain that the elections will actually be held,” said Nada Anid, the founder of Madanyat foundation, which aims for equitable participation of women, men and young people in politics.

For those women who successfully break this first barrier, they must then find the necessary funding for their own campaign. “The cost of appearing in the media is exorbitant. The candidates who have fresh dollars are the ones capable of having media visibility,” Joelle Abou Farhat, co-founder of Fiftyfifty, an NGO which aims to create gender parity in political life, said.

This is a major disadvantage for women candidates, unless they are supported by a political party, which is unlikely, because “when the traditional political parties consent to include a woman on their list, they will prioritize the one who is able to finance themselves, to have them garner [new] votes or any other electoral advantage,” an observer, who declined to be named, said, and added that there is no law dedicated to political party financing or regulations on expenditures.

The electoral law is another barrier that is likely to discourage women. First, the sacrosanct principle of sectarian quotas complicates the addition of another quota. Then comes the need for the candidate to be part of a list. That is not to mention the preferential vote. This is a huge barrier for independent candidates who are not well-known to the broader public and don’t benefit from the support of parties

“A woman may be tough. She may be distinguished and have built a reputation on a given expertise, but she still has to garner the preferential vote, which is not a sure thing,” Myriam Sfeir Mourad, director of the Arab Institute for Women at LAU, said.

“The law in force makes it harder for women, because voters have to choose only one person from the list. And it is hard for the voters to opt for a woman rather than a man,” said Najat Saliba, environmentalist and candidate for Taqaddom which emanated from the protest movement.

At a broader level, a whole series of cultural parameters and social mores keep women from achieving a political breakthrough in Lebanon. Even though this country is committed to the implementation of UN Security Council Resolution 1325 on women, peace and security, “the Lebanese political culture is still conservative, and the elections are heavily influenced by clientelism and electoral influencers,” the above-mentioned observer who declined to be named said.

“Therefore, the cult of the male zaim (Arabic for “leader”) continues to be deep-seated and there are few influential women, especially in rural areas,” the pundit said.

In addition to this cult, there is a sacrosanct “family and geographic representation criteria” which make it almost impossible for women to win, unless [they are the] daughter, sister or wife of [a leader or politician]… It is also noteworthy that the many voters and politicians are still convinced that women have nothing to do with politics.

“I heard that some people would not like to be represented by a woman, which makes things difficult for the Lebanese women,” Saliba said.

In this vein, it is not a deliberate decision to keep women from joining Parliament as much as it is a perpetuation of traditional mores. “Well-established political figures have a privilege under this patriarchal political system that discriminates against women. The latter do not get the same opportunities [as men],” Slim said, citing as an example “the electoral influencers who are predominantly men.”

Yet, all is not doom and gloom ahead of the elections. What can be said is that even in the absence of a quota for women, the discourse evolved in a way that supports a better participation of women in politics.

The October 2019 popular uprising has been a drive for this change, following in-depth work carried out by feminist associations. The parties and movements emanating from the October 2019 protest movement have thus sought to practice gender equality, which they advocate in their speeches, and parity in their lists.

Similarly, women are now running on most of the traditional political parties’ lists, except for Hezbollah’s. “The public opinion has evolved. All political parties are now in search of women to include them in their lists,” Anid said.

“No one can turn a blind eye to women’s affairs anymore. Many alternative parties have based their agenda on parity,” Sfeir said.

Women candidates in the legislative elections are working hard on their political careers, especially those who are part of the opposition parties. They are multiplying campaign rallies and interventions.

“Each woman has her expertise and clear objectives. Each one built self-confidence and believed in her ability to introduce change,” said Farhat, who follows the candidates closely. These advantages are compelling. And the candidates are often supported, or even cheered on by the voters who are very solicitous about bringing about change, more particularly among young people.

“I believe that people have faith in me more than they encourage me,” Saliba said. “They feel the need for a change and are convinced that someone needs to make it happen, even if there are massive challenges ahead.”

It is in this vein that Gistelle Semaan is giving her campaign her all. At the age of 31, this businesswoman is a candidate for the National Bloc for one of the three Maronite seats in Zgharta. She said that she is deeply moved by the support given by the young people of her generation and women.

“Even the traditional zaims admit that we, the forces of change, have a role to assume today,” she said.

Commenting on the ballot results, she said, “The results are not crucial,” and insisted that the goal is far beyond the legislative elections.

While the deadline for the Lebanese interested in applying for candidacy in the 2022 parliamentary elections, which is March 15, 2022, arrives in a few days, only 47 women number among the 419 candidates who have so far officially submitted their applications.This figure, which is equivalent to about 11.2 percent of the total number of candidates, may seem abysmally low. It is below women’s...