Standing with Ukraine — a layered perspective from Lebanon 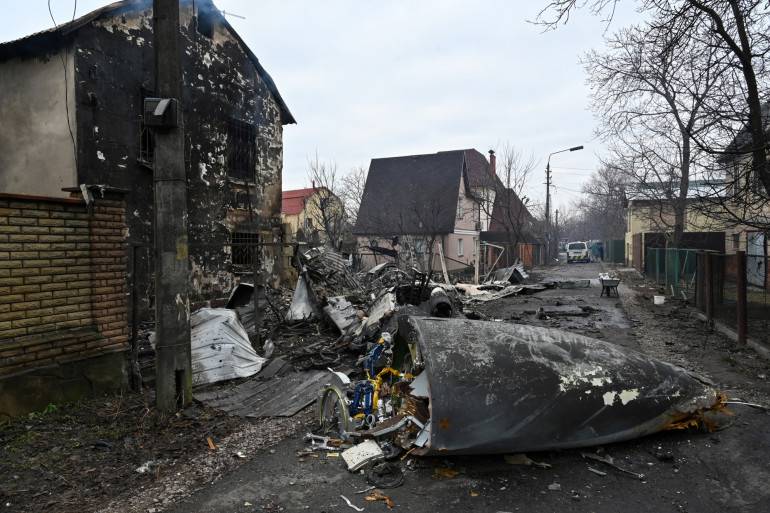 The wreckage of an unidentified plane in a residential area of Kyiv, Feb. 25, 2022. (Credit: Genya Savilov/AFP)

All eyes have been on Ukraine since the beginning of the Russian invasion more than a week ago. The event has dominated global news and prompted extraordinary sanctions from world leaders. Reporters flocked to TV news sections to deplore the creation of what they presented as the first generation of “civilized” refugees, namely Ukrainian asylum seekers. Since, all hell has broken loose and a major thread of commentary on the Russian-Ukrainian war has been the blatant racism of the West in its selective empathy towards refugees from the Global South. From the perspective of the Greater Middle East, where countries such as Syria and Afghanistan produce much of today’s refugee population, this has provoked widespread outcry and condemnation. The Arab and Middle Eastern Journalists Association has published a report denouncing the Western media’s dehumanization of victims of war. Faced with this Western bias in showing care and attributing dignity, one could ask why should the destitute of the Middle East, on top of all the scourges befalling them, care about another conflict on the European continent if the sentiment is not reciprocated?

The vivid aftertaste of Western hypocrisy in our regions can facilitate growing support for Putin at a high time of Cold War revival, as seen recently with a Hezbollah-hailed pro-Russia demonstration in Beirut. But it shouldn’t. We, and probably many other neighboring states, are well placed to know not to fall for binary narratives. From a Lebanese standpoint, we should resist looking at Ukraine through the chivalrous discourse of Washington. It might be easily tempting to demonize Putin and paint a rosy picture of Western benevolence. Putin is certainly a megalomaniac who bears direct responsibility as aggressor and occupier. NATO expansion to the East can be interpreted as provocation but this doesn’t excuse full-fledged occupation. But it certainly doesn’t justify Western virtue signaling in our homegrown discourse about Ukraine. One may ask about the differences between Russia’s actions and American occupation in Iraq and its abetting of proxy wars across the world and find no answer. We know all too well how the US willingly accepted to place post-war Lebanon under Pax Syriana for the sake of foreign calculations. So why should we pick a side instead of centering the conversation on Ukrainian agency? Similarly, we should be wary of “what-aboutism”: events in Ukraine today are painful reminders that wars occurring in Europe attract steel-like reprisals from the West, which only make bolder Western indifference to the tragedies unfolding across the Eastern Mediterranean and Central and South Asia. Affirming this, however, should not desensitize us to situations in which civilians are jet-bombed and invaded by ranks of tanks.

What we have in common with Ukraine goes beyond Manichaean debates over who is the ultimate villain within the West-Russia binary. To demonstrate the relevance of the Ukrainian crisis to Lebanon, the pragmatically minded among us pointed to our dependence on Ukrainian wheat: since Lebanon imports between 30 percent and 50 percent of wheat from Ukraine (numbers are not clear), we should be wary of disruptions to our food security chain, especially following the destruction of our grain silos in the 2020 Beirut port explosion. But there is more to the narrative of Lebanon’s attentiveness to Ukraine than economic considerations relating to wheat imports and stocks. Economic sanctions targeting Russia will have effects to be felt way beyond Lebanon. What we share with Ukrainians then, or more precisely, what speaks to us in the turbulence they’re facing, is the scarring souvenir of occupation and land burning. Israeli and Syrian occupations are quite fresh in Lebanese collective memory as they’ve respectively ended in 2000 and 2005. Putin’s hubristic sense of entitlement to Ukraine is reminiscent of Hafez and Bashar al-Assad’s unwelcome fixation on Lebanon. Similar legends of historical unity and brotherhood dictate the dynamics of these bilateral relationships: the smaller countries in each of the dyads — namely Lebanon and Ukraine — are thought to rightfully belong to the bigger ones — Syria and Russia. In the same way Putin stresses that Russians and Ukrainians are descendents from the same Slavic realm of Kievan Rus (today’s Ukraine, Belarus and parts of Russia), intellectuals such as Antoun Saade have proclaimed the existence of Greater Syria, an ancient nation which stretched beyond the actual frontiers of the Arab Syrian Republic to include modern-day Lebanon. Such desired kinship has justified the Assad regime to keep Lebanon as a vassal state for decades.

Lebanon’s neighbor to the South is no less threatening: images (sometimes misappropriated) from Ukrainian skies filled with ear-splitting jets are all too familiar to Lebanese who know the menacing power of an overtly aggressive, militarily superior neighbor such as Israel. We also have in common with Ukraine the nefarious effects of Putin’s expansionist tendencies: we know the role of Russia in enabling rogue actors, such as the Assad regime and Hezbollah, which act as primary anti-democratic forces in Lebanon. Let us also spare a thought to the innocent kids murdered in Syria by Russian weaponry. But we also know that we in the middle, just as the Ukrainian people, pay the heaviest price for heightened tensions between East and West based on assumptions about our identities, which attract unrequited meddling. Both Lebanon and Ukraine have been damned with tales about hybrid belongings that make them part of both worlds. Lebanon is the first contender among Arab countries to be claimed as partially Western. In the treacherous path towards self-determination, our tergiversations and attempts at self-defining have been transformed (by us and despite us) into wilder geopolitical crises. This is what we have in common with Ukraine.

Chloe Kattar is a fellow in history at Darwin College (Cambridge) and EUME (Berlin).

All eyes have been on Ukraine since the beginning of the Russian invasion more than a week ago. The event has dominated global news and prompted extraordinary sanctions from world leaders. Reporters flocked to TV news sections to deplore the creation of what they presented as the first generation of “civilized” refugees, namely Ukrainian asylum seekers. Since, all hell has broken loose and a...