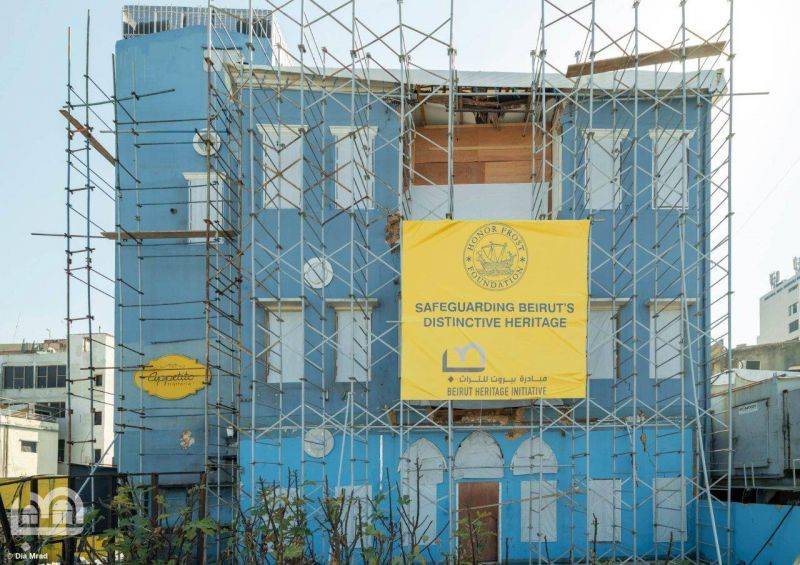 A heritage building in Beirut that was damaged in the 2020 Beirut port explosion. (Credit: DR)

The Beirut Heritage Initiative has succeeded in getting Beirut’s heritage buildings on the 2022 World Monument Watch list. They are among a selection of 25 sites of “great cultural significance” whose preservation was deemed both “urgent and vital to local communities,” according to the World Monument Watch release.

The nonprofit organization, which highlights endangered historical and cultural sites around the world, is managed by the World Monuments Fund, which helps raise funds for these sites’ conservation and protection.

This year, the International Council on Monuments and Sites — the institution that weighs in on Unesco's World Heritage List — and an independent panel of heritage experts from around the world screened more than 225 nominations before selecting 25 endangered sites for 2022, including the heritage buildings in Beirut damaged by the Aug. 4, 2020, Beirut port explosion. These buildings are in urgent need of rehabilitation.

“Heritage preservation can offer innovative solutions to contemporary global challenges,” says WMF president and CEO Benedicte de Montlaur in a statement. “We urge the world to stand with communities and save these places of extraordinary cultural significance. Heritage sites are an incredible resource for solving the problems facing society as well as local economic needs.”

Among the sites highlighted this year are Hurst Castle, a historic fortress on the south coast of England that partially collapsed during storms in 2021, and the historic city center of Benghazi in Libya, crippled by ongoing conflict. And to draw attention to the impact of climate change on the coasts, the Koagannu mosques and cemetery in the Maldives were also placed on the list, as according to the WMF, the adverse effects of sea level rise are already visible at these sites.

Older neighborhoods under the spotlight

Beirut Heritage Initiative recalls that since 1954, “high density zoning regulations have been applied in Beirut’s oldest neighborhoods. These neighborhoods are the main targets of real estate speculation. The subsequent widening of the streets and the introduction of avenues and highways, have gradually modified a dynamic and diverse social fabric. This fabric is recognizable by its quiet residential streets, clusters of heritage buildings, modest cul-de-sacs, beautiful Ottoman-era mansions and French Mandate buildings. This trend of real estate speculation was accelerated by the Civil War from 1975 to 1990, followed by the real estate strategy developed in the aftermath of the war and amplified by the downtown Beirut redevelopment project, Solidere. The explosion of Aug. 4, 2020 dealt a heavy blow to Beirut’s precious built heritage.”

Many civil society organizations have mobilized to help the city, including the Beirut Heritage Initiative, which brings together experts and long-time heritage preservation activists. In addition to raising funds for the restoration of destroyed heritage, the BHI has undertaken emergency shoring and roofing work, as well as the partial or complete restoration of individual structures or groups of buildings. The collective has also worked to implement a holistic and inclusive revitalization strategy. The announcement of the inclusion of the impacted neighborhoods on the WMF’s World Monument Watch list is an important step towards the development of this ambitious urban vision.

Launched in 1996 with American Express as a founding sponsor, the WMF is announced every two years and includes sites submitted by individuals and civil society organizations from around the world.

To date, WMW has helped raise more than $110 million for projects at more than 300 sites.

“The visibility provided by the program has also helped local communities raise more than $300 million from other sources,” de Montlaur said.

“This will encourage local decision-makers and international stakeholders to accelerate efforts and resources to safeguard and rejuvenate Lebanon’s beloved capital,” he continued, adding that “the daunting challenges facing heritage in the 21st century require innovative, sustainable, adaptive solutions. By helping local people preserve the places that are most precious to them, we can strengthen social ties and foster a greater awareness that our futures as citizens of this world are intimately connected.”

The Beirut Heritage Initiative has succeeded in getting Beirut’s heritage buildings on the 2022 World Monument Watch list. They are among a selection of 25 sites of “great cultural significance” whose preservation was deemed both “urgent and vital to local communities,” according to the World Monument Watch release. The nonprofit organization, which highlights endangered historical and...