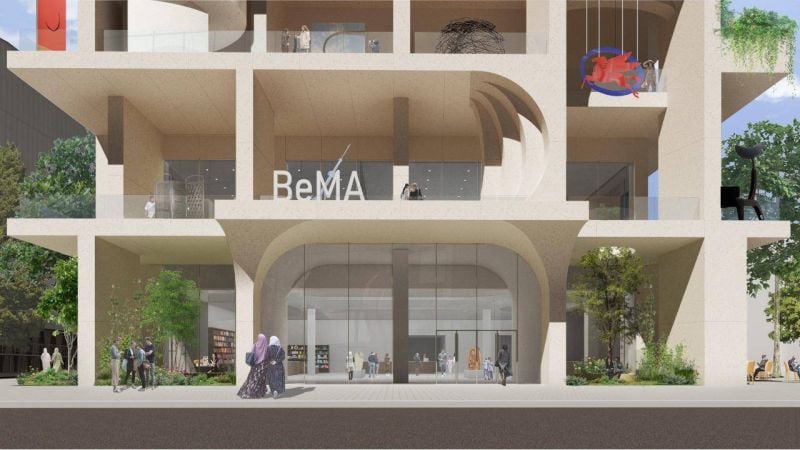 BEIRUT – After a seven-year wait and a series of political and socio-economic obstacles, officials broke ground on the construction of a new modern and contemporary art museum that aspires to serve as communal space for artists and the public.

Construction of the Beirut Museum of Art (BeMA) was launched during a press conference co-hosted by BeMA and Saint Joseph University Friday morning at the site of the proposed space. It is estimated the project will take four years to complete.

BeMA’s board of trustees intend to fund the project privately. Board member Richard Haykel declined to give an exact figure for the total projected cost of building and running the museum but said the board hopes to raise at least $50 to 60 million.

As an interactive space, BeMA will showcase the collection of modern and contemporary works collected by Lebanon’s Ministry of Culture, “a national treasure,” as BeMA cofounder Rita Nammour put it. The museum will also exhibit the work of local, regional and international artists through state-of-the-art galleries, performance spaces, a library, archive and conservation lab.

Unlike Europe, where state support of the arts is common, arts and culture are often overlooked, underrated and poorly maintained in Lebanon. Despite the country’s rich artistic heritage and colorfully diverse culture, the ongoing chaos in Lebanon has impeded efforts to support the production and exhibition of art in its numerous forms.

However, a number of artists and institutions are championing attempts to cement Lebanon’s place as a cultural center in the MENA region and globally. Launched in 2015 by the Association for the Promotion and Exhibition of the Arts in Lebanon (APEAL), BeMA’s mission statement says it is rooted in “a strong belief [in] the transformative power of the arts and the right of all people to access culture.”

In the runup to its opening, BeMA is planning a decade-long artist-in-residency program, a collaboration with the Lebanese Ministry of Education and Higher Education, that will commission a series of artist interventions. There will also be a professional art restoration program, built in collaboration with specialized institutions and staffed by a small team of Lebanese specialists who have already restored works from the Ministry of Culture’s collection. BeMA will offer an accredited course in art restoration.

The museum has been designed by architect Amale Andraos, cofounder of WORK Architecture Company (WORKac) and dean of Columbia University’s Graduate School of Architecture Planning and Preservation. The conceptual underpinning of the design, Nammour said, is to illustrate “Museum as a community, not a temple.”

“The museum will feature a dedicated exhibition space and a six-story promenade that wraps around the façade of the building. WORKac’s innovative design for an ‘open museum’ alludes to its geographical heritage, utilizing the ubiquitous Mediterranean balcony to transform its walls into hybrid indoor-outdoor spaces,” explained Nammour, who founded the museum project with Sandra Abu Nader. “Art spills out of the main building, engaging with diverse audiences through a gradient of public spaces.”

She added, “By blurring the lines between the interior and the exterior, the porous façade of WORKac’s design dissolves the traditionally closed, white cube gallery model and invites the public to engage directly with the work, creating new and varied possibilities for encounters and dialogue with the art as well as amongst its visitors.”

Apart from providing space for exhibitions, the museum will create opportunities for the production of new artistic work. It will also provide affordable shared workspaces and a number of studios for artists to work and produce, grounding the museum in the artist-led movement.

Since BeMA is working in collaboration with Saint Joseph University, which has donated the plot of land where it will be built, the museum will offer classes that will be accredited by the university’s degree programs.

Well before Lebanon’s current catastrophic crisis, several Lebanese museum plans were announced. Back in 2015, Beirut Contemporary (as BeMA was then known) was projected to be the city’s first museum of contemporary and modern art – an initiative led by APEAL. The project was put on an indefinite hold after the uprisings in 2019 and later the tragic Beirut port explosion in 2020.

Despite the name change, BeMA still holds the same values and hopes to achieve the same goals, the museum’s proponents said: giving local and international artists a space to thrive, create and share, despite the lack of public funding for the art scene.

In the absence of government funding, private institutions and funders have allowed for initiatives such as BeMA to survive.

This has posed a question of whether such a hefty sum of money spent on a museum is sustainable, even relevant in today’s climate.

“We have almost finished the fundraising for the museum.” Nammour told L’Orient Today. “We're starting the endowment, and many people are interested in supporting [it]. This is why we…went ahead with the building of the museum, with the construction… [Going forward with the project] is a gesture of persistence.”

She said the museum’s board of trustees is more convinced than ever that “a museum [fostering] social awareness and reflection is a necessity and, as such, with the encouragement of the donors, took the decision not to delay the breaking ground. Without arts and culture, society will fall completely and will degrade.”

BEIRUT – After a seven-year wait and a series of political and socio-economic obstacles, officials broke ground on the construction of a new modern and contemporary art museum that aspires to serve as communal space for artists and the public.Construction of the Beirut Museum of Art (BeMA) was launched during a press conference co-hosted by BeMA and Saint Joseph University Friday morning at...