Egypt’s Minister of Petroleum and Mineral Resources Tarek el-Molla projected the date for completing the maintenance work on the pipeline linking Egypt to Lebanon at the end of February. 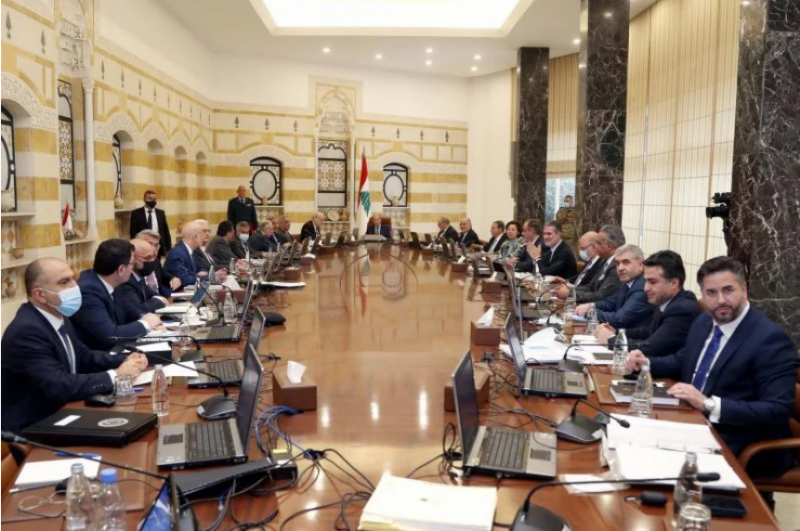 Meeting of the Cabinet Tuesday in Baabda. (Credit: Dalati and Nohra)

It is well known that reforming the electricity sector is at the top of the list of priorities that Lebanese leaders must tackle and eventually start implementing.

However, they have to overcome yet another unexpected obstacle on this road — one that proved decisive in justifying the cabinet’s delay in discussing the electricity reform plan presented by Lebanese Minister of Energy and Water Walid Fayad: the language barrier.

The ministers who met yesterday in Baabda were handed an English version only of the reform plan, which prompted them to postpone the meeting “until another version in Arabic is available according to standards,” a ministerial source told L’Orient-Le Jour.

The main points of the plan, however, were still discussed during yesterday’s meeting, according to several ministers.

The reform plan, which should include an increase in Électricité du Liban’s tariffs, is an essential prerequisite to unlocking key financings from the World Bank for the electricity sector.

EDL tariffs have been set since the 1990s at a level below their real cost, prompting the public electricity establishment to rely on treasury advances in order to finance its operations and fuel purchases, which has contributed to deepening an already abysmal public debt.

In an interview with the al-Manar television channel on Feb. 13, Fayad said, “if everyone’s committed to implementing this plan,” by distancing themselves from political disputes, Lebanon would have “24 hours of electricity per day by 2025-2026.”

He added that according to his plan, EDL should be able to ensure eight to 10 hours of power per day starting in the spring, and later between 16 and 18 hours per day in 2023.

No longer able to pay for the fuel of its power plants without draining its foreign exchange reserves, Lebanon has, since the summer of 2021, resorted to bilateral and multi-party agreements to secure a portion of its fuel needs.

Since August 2021, Lebanon has had a “swap” deal with Iraq for electricity supply in exchange for local services inside the country. During that same month, the United States announced a two-fold initiative to help the energy-starved country by securing electricity via Jordan and importing gas from Egypt. Both deals, however, have yet to materialize, largely because of issues with the financing of the energy imports.

The exact amount of financing to be provided was not yet determined, while the government’s initial request was $250 million, according to Jha at the time.

In addition to the contracts made between the Lebanese, Syrian, Jordanian and Egyptians authorities, the outcome of these negotiations depend on the willingness of the US to exempt the deal from its sanctions under the Caesar Act vis-à-vis Syria, targeting any person or entity collaborating with the Syrian régime — an essential derogation that depends on the green light from the World Bank.

When it comes to importing Jordanian electricity, Lebanon, Jordan and Syria signed the relevant contract on Jan. 26. In the press conference following the event, Fayad said that the deal would “secure 250 MW of electricity, in cooperation with Jordan and with the support of Syria,” a capacity that should be made available by late March.

“The World Bank financing issue still needs to be finalized. We will work on that quickly so that the agreement becomes effective,” he said.

Progress is seemingly being made on the Egyptian part of the deal, whose details have not been ironed out yet. During the Egyps 2022 conference held in Cairo, Molla said Monday that negotiations “are going well” with the World Bank, the United States and Lebanon.

“We have agreed on the technical and financial issues, and the work to repair (the gas pipeline) should be completed by late February,” he added, and indicated that the parties involved still have to agree on some “procedures.”

At the end of December 2021, Fayad kicked off the repair work that would allow the gas pipeline linking Egypt to Lebanon to resume operation. Hesham Radwan, CEO of Egypt’s Technical Company for Gas Pipeline Operation Services (TGS), which the authorities concerned selected for the project, was also present at the event in Tripoli where the minister launched the work and said that this operation should be completed not later than “next March.” This deadline seems to have been respected so far.

Once all the details are finalized, this deal will regulate the import of 650 million cubic meters of Egyptian gas per year to Lebanon, which would allow the Deir Ammar power plant (in the North) to deploy nearly 450 megawatts and therefore operate at full capacity all year long.

Although Lebanon also has Zahrani, another gas-fired power plant, in the south, it cannot be supplied with Egyptian gas in the short run, due to the lack of necessary infrastructure.

Although the Lebanese eagerly await the deal to import Egyptian gas, which would lead to higher supply hours, it has already raised controversy.

This topic sparked a debate several weeks ago, due to the circulating rumors that Lebanon could import Israeli gas via the Egyptian deal. Israel’s Channel 12 reported on Jan. 15 that a deal for Israel to supply gas to Lebanon had been signed in secret after being brokered by Amos Hochstein, Washington's special envoy and coordinator for international energy affairs. Fayad and the US State Department denied the reports.

However, this issue has been back to the forefront, following the remarks of Israel’s Minister of National Infrastructure, Energy and Water Resources, Karine Elharrar, who was also present at Egyps 2022.

Reuters reported her as saying that it would not be a problem if Israeli natural gas, which is already exported to Egypt, finally reaches Lebanon.

Reuters quoted her as saying, “Nobody can go and inspect the molecules and check whether they originally came from Israel or Egypt,” adding that in case the Israeli gas exports reach Lebanon and “bring calm to the region, I can’t object to it.”

It is well known that reforming the electricity sector is at the top of the list of priorities that Lebanese leaders must tackle and eventually start implementing.However, they have to overcome yet another unexpected obstacle on this road — one that proved decisive in justifying the cabinet’s delay in discussing the electricity reform plan presented by Lebanese Minister of Energy and Water...