Mired in poverty, dozens of Lebanese join jihadists in Iraq

A view of the northern Lebanese city of Tripoli's neighborhoods of Bab al-Tabbaneh and Jabal Mohsen on Jan. 17. (Credit: Joseph Eid/AFP)

TRIPOLI, Lebanon — Zakaria al-Adl was presumed to have attempted a sea escape to Europe after he had gone missing over the summer, but then the young Lebanese man turned up dead in Iraq.

A native of the northern Lebanese city of Tripoli, the 22-year-old is one of at least eight men who have been reported killed in Iraq since December 2021, as a suspected jihadist militant.

They all hail from impoverished Tripoli districts, and were allegedly lured into joining the Islamic State (Daesh) group by the promise of a decent salary, according to a security official.

Dozens more from the same Mediterranean port city are believed to have recently joined Daesh's ranks with their recruitment handled by a Tripoli jihadist who lives outside Lebanon, the official said, speaking on condition of anonymity about the sensitive issue.

"We didn't know he was in Iraq until we were notified of his death" in December, Zakaria's mother, Ghufran al-Adl, 56, told AFP from their one-bedroom apartment in the Bab al-Tabbaneh neighbourhood, one of the country's poorest.

Zakaria had been missing since last summer, but it wasn't until the Iraqi army in December published images and videos of slain IS fighters in Iraq's western Anbar desert that his family came to know of his death.

His brother Ali al-Adl played one such video on his phone, which appeared to show the corpse of Zakaria beside another body on the hood of a car. 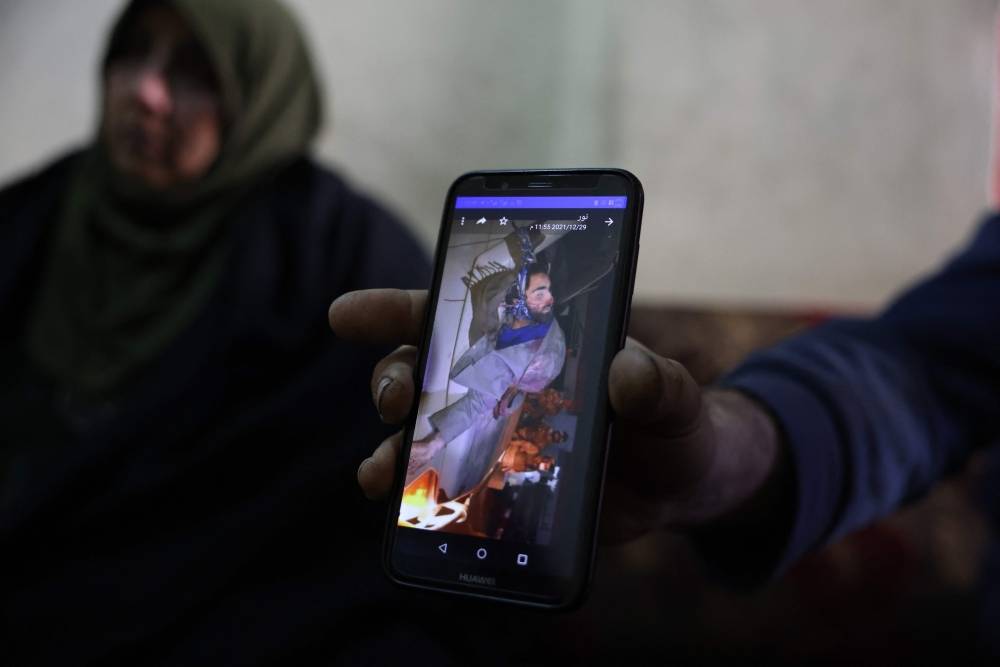 Ghufran, 56, the mother of Zakaria al-Adl, a member of Daesh killed in Iraq, talks to AFP as one of her sons shows a photo of his slain brother, during an interview in her house in the Bab al-Tabbaneh neighborhood on Jan. 12. (Credit: Joseph Eid/AFP)

In a statement at the time, the Iraqi army said it had killed 10 Daesh jihadists in strikes and clashes.

Youth 'on the sidelines'

Zakaria's family said poverty and not ideological affiliation is what primarily drove the young man to join jihadist ranks, at a time when Lebanon is grappling with an unprecedented financial crisis.

"When he disappeared, we thought that he was planning to go to Sweden illegally," Ali said.

"He left because of poverty," Ali said of his brother, who used to run a vegetable cart.

Ghufran, who is in urgent need of heart surgery that her family cannot afford, said that her son "lived and died on the sidelines."

Since August, dozens of young men have disappeared from Tripoli, which has been especially hard hit by the country's financial crash.

"The number of young men who joined IS is estimated at 48," said a security official, explaining that the latest wave of recruits left Lebanon on Jan. 18.

"Their families informed authorities of their whereabouts after receiving calls from them while they were in Iraq," the same source added.

Only five of the 48 have yet to be accounted for, the official added.

Even before the 2019 onset of Lebanon's financial crisis, Lebanon's second city was widely seen as a volatile militant bastion.

Its poorest neighborhoods have been major supporters of Sunni militants responsible for attacks against the army and involved in jihadist activities in Tripoli and beyond.

Thousands have been detained on suspicion of terrorism links, many without trial.

The group is luring its recruits with the promise of "salaries reaching up to $5,000 a month," the official said.

'Your darling is dead'

In January this year, the Wadi al-Nahleh village near Tripoli received news that Omar Seif was among five of its residents killed in Iraq.

Omar left Tripoli on Dec. 30 and died nearly a month later, according to his family.

Omar's mother found out about it via WhatsApp, according to a relative who spoke to AFP on condition of anonymity.

She had sent Omar a message asking: "How are you, my darling?"

The response she received, from a number Omar had previously used to call her, read: "Your darling is dead."

The Iraqi army issued a statement naming Omar and two of his cousins as Lebanese citizens killed in airstrikes targeting Daesh fighters in the eastern province of Diyala.

AFP had met Omar's mother two weeks before his death.

She claimed poverty took her son, an ex-convict detained on suspicion of involvement in attacks against the army — and who had virtually no job prospects after being released from jail.

"He was desperate," she told AFP then, asking not to be identified for security reasons. "No one wanted to hire him … so he worked as a day laborer."

Omar was planning to marry his fiancee within the coming two months which caused him to obsess over finances, his mother added, blaming the Lebanese state for her son's fate.

When asked if she feared he might have joined IS, she said: "I am afraid he might have … but better die there than ever return to Lebanon, even if that means never seeing him again."

TRIPOLI, Lebanon — Zakaria al-Adl was presumed to have attempted a sea escape to Europe after he had gone missing over the summer, but then the young Lebanese man turned up dead in Iraq.

A native of the northern Lebanese city of Tripoli, the 22-year-old is one of at least eight men who have been reported killed in Iraq since December 2021, as a...