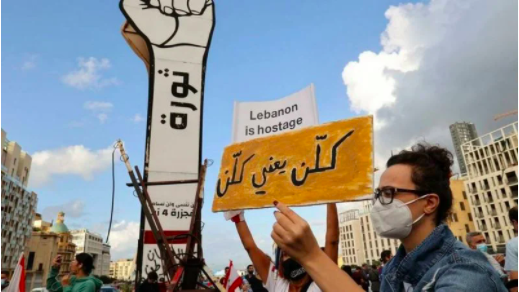 Protesters gather in front of the fist of revolt, symbol of the 2019 protest movement in central Beirut, Oct. 17, 2021. (Credit: Anwar Amro/AFP)

With more than 250,000 votes, some 20 MPs and a dominant position within the Sunni community, Saad Hariri’s Future Movement is a major player on the Lebanese political scene.

By deciding to boycott the 2022 legislative elections, the Future Movement would leave the opposition forces claiming to represent the Oct. 17, 2019, uprising with more room to maneuver.

“Hariri’s absence from the May elections is an incredible opportunity,” he told L’Orient-Le Jour.

Takadom is banking on the constituency of Chouf-Aley (Mount Lebanon IV), where Hariri carries considerable weight, with Sunnis having two parliament seats in the district. They represented around 20 percent of the electorate in 2018.

In the 2018 elections, the joint list of Walid Joumblatt’s Progressive Socialist Party, Samir Geagea’s Lebanese Forces and the Future Movement won more than 98,000 votes (58 percent of the total), including 15,000 preferential votes to Hariri’s candidates Mohammad Hajjar and Ghattas Khoury.

Takadom also intends to nominate a candidate — Lina Tannir, a professor at the American University of Beirut — in the Beirut II constituency, where the Hariri family, under Rafik Hariri and his son Saad, have been represented by a parliamentary seat since 1996.

In 2018, five of the 11 MPs elected in the western section of the capital were affiliated with the Future Movement, whose list obtained 44 percent of the vote.

Miraz Jundi, a founding member of the Akkar Revolutionaries Alliance, is also hoping that Hariri’s decision would free up Sunni voters in this area of North Lebanon, with just under 190,000, or two-thirds of the electorate, of their “sentiment,” toward the Hariri family.

“After the death of Rafik Hariri, people voted for Saad out of loyalty to his father. Without Saad Hariri, they will make a wise choice,” he said.

Four of the seven MPs from the Akkar constituency (North I) belong to the Future Movement, whose alliance with LF secured 57 percent of the vote in 2018.

‘Lebanon’s Sunnis have always been moderate’

The pertinent question, however, is: Can the opposition parties be a credible alternative to Saad Hariri?

“A large portion of the electorate is now freed from sectarian loyalties and is looking for a new political project. This is what we intend to offer,” Daou said. His party’s political program is focused on the civil and social state, and the disarmament of Hezbollah — an agenda that he hopes will sway voters.

“Lebanon’s Sunnis have always been moderate. Saad Hariri reflected this social reality; he did not create it. I think they will turn to us rather than the fundamentalist and isolationist movements,” Daou said.

The thawra (Arabic for revolution) forces are not the only ones seeking to fill the void left by the Future Movement.

Bahaa Hariri, Saad Hariri’s older brother, claims to be both his father’s political heir and the voice of the popular opposition movement via his Sawa Li Lubnan party (Together for Lebanon), which is allied with Jundi’s Akkar Revolutionaries Alliance.

“Our movement has high chances. The Sunnis of Akkar and Lebanon will surely not go to the pro-Hezbollah Sunnis. They will remain faithful to the legacy of Rafik Hariri and will choose the civil state, respect for the constitution and the disarmament of militias,” Jundi said.

Away from the elections, some movements see the former prime minister’s shocking decision as the beginning of the collapse of the political structure.

“Saad Hariri has decided to suspend his political activity because the two pillars on which his leadership rests no longer hold. He has lost the support of Saudi Arabia, and the clientelist machine that allowed him to preserve the loyalty of his community no longer works,” said Ahmad Assi, a member of Citizens in a State, another opposition party.

“Hariri’s withdrawal would weaken the political structure in place, which is based on power sharing between sectarian leaders. This is why even the Sunni leader’s political rivals regretted his decision,” Assi added.

“More than ever, we must call for a peaceful transfer of power to a secular and capable state, and not be content with the hope of winning a few seats in Parliament,” he concluded.

The Citizens in a State party has long posited that elections are not a realistic way to bring about real change, arguing that the vote would not be held if the traditional parties were not certain that they could preserve their positions.

With more than 250,000 votes, some 20 MPs and a dominant position within the Sunni community, Saad Hariri’s Future Movement is a major player on the Lebanese political scene.By deciding to boycott the 2022 legislative elections, the Future Movement would leave the opposition forces claiming to represent the Oct. 17, 2019, uprising with more room to maneuver.“After political Harirism, make...