Inexpensive and easy to use, drones are the Shiite party’s favored tool in its fight against Israel. 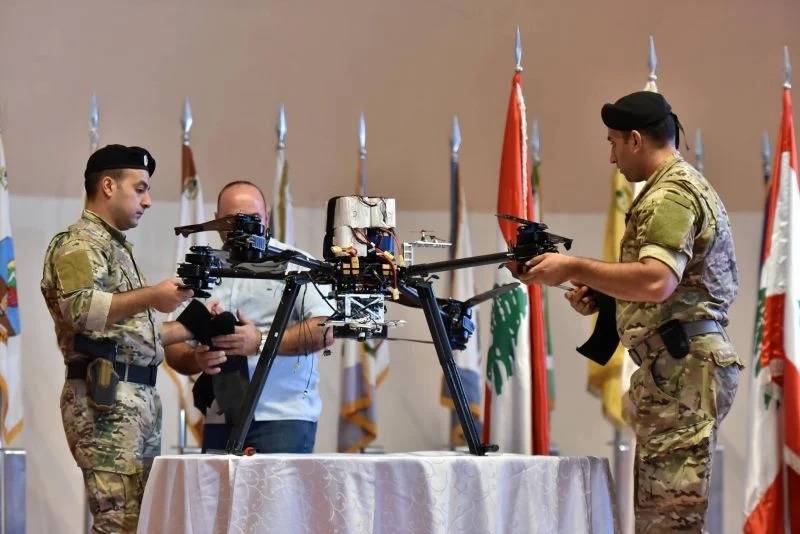 At a press conference on September 19, 2019 in Yarze, then-Defense Minister Elias Bou Saab presented the results of the examination of the remains of Israeli drones, which had flown over the southern suburbs at the end of August, and the investigation carried out by the army into this affair. (Credit: Rene Mawad)

The use of drones seems to be a part of an international dynamic, serving as the centerpiece in a number of conflicts: in the Caucasus, Syria and even Ukraine. Hezbollah does not seem to be an exception to the rule in its fight against Israel.

The production of military drones has also been widespread in emerging countries such Turkey, Iran, Pakistan, and India, in addition to traditional military powers such as the United States, France and Israel. The Center for the Study of the Drone at Bard College revealed that 95 national armies used drones in 2019, up from just 60 nine years earlier

The trend also appears to have gained traction within Hezbollah in Lebanon. According to a December 2021 study by the Israeli Alma Research and Education Center — which is focused on researching security incidents on the northern borders of occupied Palestine — the party has more than 2,000 drones.

While the information, coming from an Israeli center, should be taken with a grain of salt, it remains a significant indication of Hezbollah’s developing air arsenal, alongside its long-range missiles, as well as its “100,000 fighters,” as claimed by the party’s secretary-general, Hassan Nasrallah. In 2013, the Israeli media claimed the party owned only 200 drones.

L’Orient-Le Jour reached out to a Hezbollah spokesperson for comment on the organization’s drone arsenal, but the party had yet to reply at the time of publication.

Hezbollah did not fail to use its armada on Jan. 4, which marked the second anniversary of the assassination of its ally, Qassem Soleimani, an Iranian military officer in the Islamic Revolutionary Guard Corps. The drone was shot down at the border by the Israeli army, which downed five other drones in a year, according to Israeli media, which also reported that the Israeli army is increasingly developing its anti-drone technology.

On the other hand, at the end of September 2021, Hezbollah shot down an Israeli reconnaissance drone in southern Lebanon, near the village of Yater.

How to explain the international popularity of this machine?

“It is less expensive than a classic fighter jet. It can stay in the air much longer, up to 36 hours, compared to two hours for a traditional fighter jet. With a drone, there is no need to train a pilot, which can be a laborious process that can take up to three years. You just have to train some soldiers to fly it, which is much easier,” Khalil Helou, a retired Lebanese Army general and military expert, told L’Orient-Le Jour.

“A drone is especially useful for infantrymen. It can ‘keep watch’ by going on scouting missions to prepare soldiers in the field. Hezbollah used this technology in Syria,” he added.

For Nasrallah’s party, using drones for reconnaissance has many advantages.

“It is cheaper, more efficient and safer than spying or hacking. The resistance has used this technology in all its battles, including against the Islamic State (ISIS),” Mohammad Atwi, another retired general said.

“Of course, there’s the risk that the drone might be shot down. But it is an affordable risk, because it is not so expensive to produce drones, which are able to collect valuable information,” he added.

While it is unclear how much the aircraft used by Hezbollah cost, with models often varying considerably in sophistication, all experts interviewed confirm that drones are a cost-effective way for the party to carry out its reconnaissance missions.

Nicholas Blandford, a Beirut-based researcher at the Atlantic Council and an expert on Hezbollah weapons, explained that the most primitive models, similar to those found in superstores and which have already been used by Hezbollah, cost a few hundred dollars to produce.

Drones, however, are not only used for reconnaissance, as some are equipped with missiles and can identify and hit a predefined target.

“Hezbollah does not have drones that can carry missiles,” Atwi said, explaining that “reconnaissance drones, however, can be used as kamikaze.”

In this case, a drone is assigned to a target. Once a target is identified and locked on, its operators send a command for the unmanned aircraft to nose-dive toward it and self-destruct on impact.

In the event of armed confrontation with Israel, Hezbollah could launch a large number of drones at the same time to the same target, Blanford said, and jammed air defense mechanisms would be unable to protect the target by destroying all the drones.

Using drones, however, is not something new for Hezbollah. In November 2004, a Mirsad-1 reconnaissance machine entered Israeli airspace, flying over some eight kilometers to the city of Nahariyya, in Galilee, before returning to Lebanon, 18 minutes later.

“As of this morning, our aircraft will fly into occupied Palestine whenever we want,” Hezbollah said, after the operation.

According to the United States Institute of Peace, an American federal institution, the Hezbollah drone that conducted that mission is currently on display at the Museum of Resistance in Mlita, in southern Lebanon, and bears a strong resemblance to the Iranian “Ababil” model, known for its ease of use.

The drone was the first in a long series of reconnaissance flights by Hezbollah in occupied Palestine, every time with increasingly sophisticated unmanned aircraft.

For instance, at the end of 2012, Hezbollah launched an Ayoub reconnaissance device to the Negev desert in southern Israel.

While the drone was shot down by the Israeli army, the party “succeeded in circumventing Israel’s Iron Dome [air defense system], and flew over sensitive sites south of Palestine, before being destroyed near the Dimona nuclear power plant,” according to Nasrallah in a speech that he delivered just after the operation.

The Ayoub model is similar to the Iranian Shahed-129 drone, according to USIP.

​​Are Tehran’s proxy groups in the region receiving Iranian-made drones?

While Hezbollah has repeatedly claimed that its drones are assembled locally, some believe that Tehran is never far away

“The Iranians are known to be impressive in manufacturing drones and have extremely sophisticated models. Some can fly up to 12 kilometers in altitude and intercept communications taking place at lower altitudes,” Helou said.

“The question is how ready the Islamic Republic is to share its technology with Hezbollah,” he added.

For his part, Atwi stressed that the Shiite party is capable of designing its own drones.

“There’s no doubt that the resistance has the necessary skills to manufacture these drones and is self-sufficient in production. The Iranians are not smarter than us,” he added.

The use of drones seems to be a part of an international dynamic, serving as the centerpiece in a number of conflicts: in the Caucasus, Syria and even Ukraine. Hezbollah does not seem to be an exception to the rule in its fight against Israel.The production of military drones has also been widespread in emerging countries such Turkey, Iran, Pakistan, and India, in addition to traditional...