Why does Gebran Bassil want to visit Damascus?

Tony Saliba, the director-general of State Security, who is close to President Michel Aoun, has recently visited Syria twice. 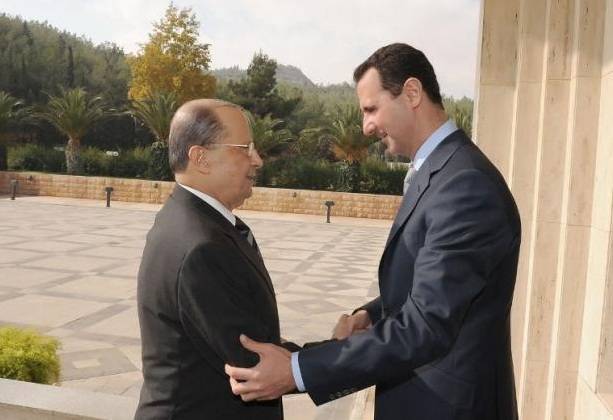 Gebran Bassil, President Michel Aoun’s son-in-law and head of the Free Patriotic Movement political party which the president founded, appears adamant about taking the road back to Damascus. In his speech Sunday, he said it bluntly, “If my visit [to Syria] can be of any help, I am ready to do it, even before the legislative elections.”

Bassil’s plans to revive ties with President Bashar al-Assad’s regime are not something new.

In the summer of 2018, two ministers in the government of then Prime Minister Saad Hariri, Hussein Hajj Hassan (Hezbollah), and Ghazi Zeaiter (Amal), made a visit to Damascus in a bid to encourage the normalization of official ties between Lebanon and Syria.

At the time, Bassil wanted to follow suit, but he wanted his visit to be done discreetly.

“The Syrian regime refused. It wanted the meeting to be official,” a Hezbollah official told L’Orient-Le Jour on condition of anonymity.

The Christian leader was not yet under US sanctions and such a trip to Damascus would have had negative repercussions for him.

The presidential camp, however, maintained contact with the Syrian government through former minister Pierre Raffoul.

A few months later, Bassil no longer hid his plans. In a speech he delivered in commemoration of Oct. 13, 1990, marking Aoun’s ousting from the Baabda Presidential Palace, the FPM head said he wanted to “go to Syria so that Syrian [refugees] would be able to return home.”

‘Aoun cannot, but Bassil can’

The situation has since changed drastically. Sanctioned by the US, Bassil now has much less to lose.

His party is isolated. The FPM’s relations with its only ally Hezbollah are rocky. The party needs external support.

For Bassil, Syria, Lebanon’s former occupier, which his father-in-law fought in his “war of liberation,” seems poised to serve as a strong support.

According to information obtained by L’Orient-Le Jour, General Security chief Abbas Ibrahim and director-general of State Security Tony Saliba have in recent months been acting as intermediaries between Baabda and the Syrian government.

Saliba has already been in Damascus twice in preparation for Bassil’s visit, according to a security source who spoke to L’Orient-Le Jour.

The main objective of such a visit would be to make “progress on the refugees’ issue,” an FPM official said.

Lebanon hosts over a million Syrian refugees, and the FPM has made it one of its top priorities to return them home.

The presidential camp believes it can score points among the Christian community if it manages to extract a commitment from the Syrian regime on this issue.

The majority of refugees, however, do not wish to go back to Syria as long as Assad is in power, mainly citing security reasons. Conversely, the Syrian regime shows no willingness to want the return of refugees, despite pressure to do so from its Russian patron.

“The visit would also touch on strengthening trade and agricultural cooperation between the two countries within a vision that would include Lebanon, Syria, Iraq and Jordan,” the FPM source added.

The president and his son-in-law are convinced that the Syrian regime will make a comeback on the regional scene by normalizing its relations with other Arab countries.

There have been substantial efforts by Jordan to restore ties with Syria, and the United Arab Emirates is likely to follow suit. It is in view of this that the Aounist camp wishes to consolidate its ties with the Syrian government.

“Aoun cannot meet Assad in person, given the West’s position [vis-à-vis Syria]. But Bassil, who is already under US sanctions, can do it,” a source at the Presidential Palace said.

The FPM leader also has something else on his mind. “He is looking for another political cover, because Hezbollah’s cover seems to be wearing out,” a prominent politician opposed to the Aounist camp said.

Damascus could have a say in the run-up to the presidential race in Lebanon, which is due to take place in October.

“Bassil fears that Assad might support Sleiman Frangieh, his long-time ally, as a presidential candidate, and might brush him aside from the start,” the anti-FPM source said, adding that Bassil “wants to make sure he can enter the fray.”

Bassil’s detractors also accuse him of wanting to play the “Assad card” against Parliament Speaker Nabih Berri, formerly Syria’s strongest ally in Lebanon, before falling from grace in Damascus’ eyes.

The Amal head and the presidential camp have been at loggerheads for years — a conflict that has escalated in recent months.

Hezbollah is looking at the situation with caution.

“Bassil wants to handle international affairs like he handles affairs at home. But that is not possible with the Syrian regime,” a senior Hezbollah official said.

If Assad wants to take on the role of arbitrator in Lebanon once again, he will certainly do so on his own terms, which will probably conflict with Bassil’s, especially since the latter is not the Syrian government’s main ally in Lebanon.

Gebran Bassil, President Michel Aoun’s son-in-law and head of the Free Patriotic Movement political party which the president founded, appears adamant about taking the road back to Damascus. In his speech Sunday, he said it bluntly, “If my visit [to Syria] can be of any help, I am ready to do it, even before the legislative elections.”Bassil’s plans to revive ties with President Bashar...