Mikati to convene cabinet ‘soon’, ISF intervenes in migrant worker abuse, schools set to reopen: Everything you need to know to start your Friday

Here’s what happened on Wednesday and Thursday and what to expect today, Friday, Jan. 7 and over the weekend 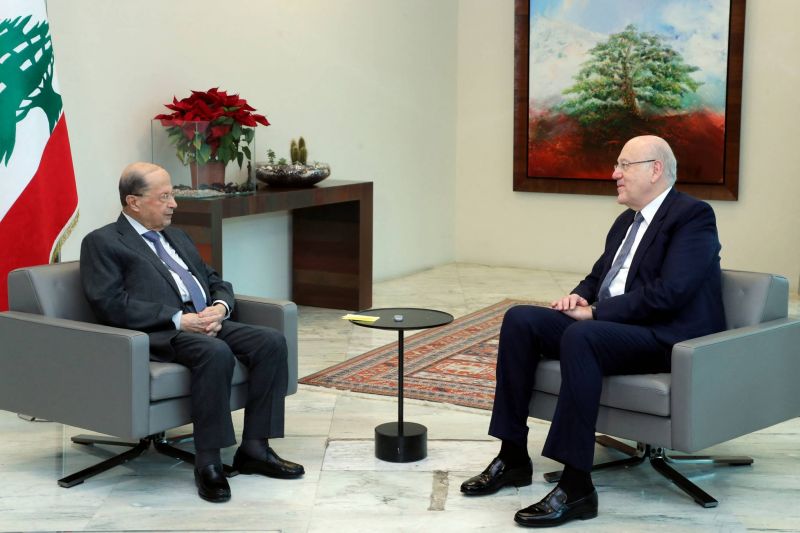 Prime Minister Najib Mikati said he will convene a long-awaited cabinet session soon, while President Michel Aoun gave the green light for an extraordinary Parliament session. In a statement released after meeting President Michel Aoun on Wednesday, Mikati said that the proposed 2022 budget is ready and a meeting would be called to discuss and approve it. Aoun and Mikati also agreed to immediately open an extraordinary parliamentary session to pass the budget, with Aoun announcing that it would begin Jan. 10. A national budget is a prerequisite to any deal with the International Monetary Fund. A delegation from the IMF is expected to arrive in Beirut this month, with talks expected to begin on Jan. 17, and officials have said the first “concrete” results could come by the end of the month. If the cabinet does, in fact, meet, it would signal the end of a nearly three-month deadlock. Mikati had refrained from calling a session before out of concern that some of its members would boycott the meeting — risking the cabinet’s implosion — over an inter-ministerial disagreement precipitated by Amal and Hezbollah’s opposition to Judge Tarek Bitar’s ongoing leadership of the investigation into the 2020 Beirut port explosion. Meanwhile, the extraordinary parliamentary session will restore immunity to MPs implicated in the port blast probe, but the investigation is, in any case, currently suspended as a result of a lawsuit filed by officials Bitar had summoned for interrogation.

The Internal Security Forces arrested a man seen physically abusing a migrant worker in a video circulated on social media on Wednesday. Within hours of the footage — which shows a man dragging a female migrant worker by her hair in the middle of the day — giving rise to outrage on social media platforms, the Labor Ministry opened an investigation into the incident. A statement released by Labor Minister Moustafa Bayram on Wednesday said that after seeing the video, “the minister took initiative and opened a special investigation,” and that he won’t “be easy in dealing with an offense to any person, including migrant domestic workers.” The country’s restrictive kafala system, which connects migrant workers to a single employer, has repeatedly been decried as abusive by both rights groups and workers

While COVID-19 case numbers hit a new record high Thursday, schools are set to reopen for in-person classes starting Jan. 10. In a joint press conference by the health and education ministries on Wednesday, it was announced that the reopening would take place with strict measures in place to prevent the spread of COVID-19. Late last week, Health Minister Firass Abiad voiced skepticism about reopening schools. However, on Wednesday, he noted that closing schools for a third consecutive year would be a “tragedy and disaster because the most valuable thing we can give our children is knowledge.” Education Minister Abbas Halabi, meanwhile, said that his ministry would publish a report on the number of COVID-19 cases per school and region and will equip schools with rapid tests to screen for the virus. Lebanon has seen a surge in COVID-19 cases due to the spread of the Omicron variant; on Thursday, the Ministry of Public Health reported a new record high in daily case numbers, with 7,247 testing positive. On Wednesday, the Internal Security Forces announced 1,081 fines had been issued to those breaking COVID-19 restrictions since Dec. 17.

Parents of Lebanese students abroad will gather today at 11 a.m. in front of the Baabda Presidential Palace to demand that President Michael Aoun sign legislation extending the so-called “student dollar law” which allows Lebanese families to transfer dollars abroad to pay tuition fees. In a statement released Wednesday, the Association of Parents of Students Abroad asked Aoun “to embrace students and provide them with the hope of steadfastness abroad.” The president has yet to sign the latest version of Law 193, known as the student dollar law. The law was initially approved in 2020. It stipulates that commercial banks must allow clients to transfer up to $10,000 at the official rate of LL1,515 to the dollar to Lebanese students who had been studying abroad since before 2020. It was amended by Parliament in December 2021 to allow transfers for the current academic year and future years, but Aoun has so far withheld his signature from the law.

Order of Dentists elections will take place this Sunday after being postponed last year in November when a dispute broke out over the vote counting process and ballot boxes were overturned. The elections, which were originally scheduled to take place on the same day as the Order of Pharmacists elections, were then postponed until this Sunday. Dentists voting in November had three lists of candidates: “My order, my revolution," supported by the Kataeb party and represented by Emilie Hayek; a list belonging to candidate Elias Maalouf supported by Hezbollah and the Amal movement; and a third list called "The dentist’s revolt,” which claims to be part of the Oct. 17 movement and is chaired by Ronald Younes, who is known to be close to the Lebanese Forces.

In case you missed it, yesterday’s must-read from L’Orient Today: “Inside the rubble of Électricité du Liban: a guided tour of a tense daily routine”

Prime Minister Najib Mikati said he will convene a long-awaited cabinet session soon, while President Michel Aoun gave the green light for an extraordinary Parliament session. In a statement released after meeting President Michel Aoun on Wednesday, Mikati said that the proposed 2022 budget is ready and a meeting would be called to discuss and approve it. Aoun and Mikati also agreed to...