The consumption of fuel in Lebanon has been almost halved since September, fuel industry representatives said 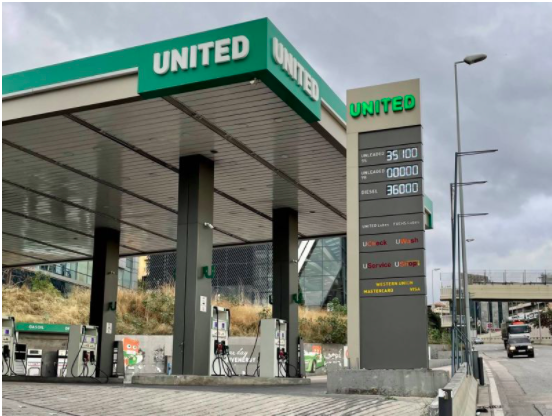 A further increase in prices at the pump was recorded yesterday in Lebanon. (Credit: OLJ)

Driven by the continued depreciation of the national currency, whose rate on the parallel market reached a new record yesterday exceeding LL30,000 to the US dollar, and the upward trend in world fuel prices in recent weeks, the price of 20 liters of gasoline could quickly exceed the LL400,000 mark.

This was stated yesterday by the spokesperson for the gas station owners’ syndicate, Georges Brax, in an interview with Voice of Lebanon radio. He reiterated these concerns to L'Orient-Le Jour. His analysis is broadly shared by a well-informed source within the Association of Petroleum Importing Companies in Lebanon (APIC), and by the syndicate of gas distributors, both also asked to comment on the latest increase in fuel prices, published yesterday morning.

"It is expected that LL400,000 charged to motorists per tank of gasoline may be exceeded in less than a month if the lira continues to depreciate and oil prices, which are up sharply since last December (despite the decision taken at that time by OPEC to increase global production), continue on this trend," said Georges Brax.

The source at APIC, meanwhile, says that gasoline prices will also vary depending on the evolution of the portion of dollars that the Bank of Lebanon agrees to exchange at a lower rate than the parallel market for lira provided by fuel importers, as part of what remains of its subsidy program. "If tomorrow, this proportion is changed substantially, prices in lira will immediately skyrocket," she said.

Finally, the president of the syndicate of gas distributors, Jean Hatem, said, "prices will continue to rise and there is no tangible sign of improvement in the short term." He reminded that, unlike gasoline, the prices of diesel fuel sold to private generator owners and household cooking gas have not been subsidized for some time. "Customers are still charged in lira, but the importers are meeting their own needs in dollars," he says.

All sectors report, moreover, a drop in consumption ranging from 40 to 50 percent since September, when BDL severely reduced or eliminated subsidies on each fuel category. "The trend is less dramatic for fuel oil [diesel] used by private generators. This is due to the increase in rationing imposed by Electricité du Liban (EDL), despite the fact that many operators have themselves reduced their power generation while their already metered subscribers increasingly ration their consumption," the APIC source explained.

"Gas consumption, whether by individuals or professionals (including bread ovens or other sandwich shops), has fallen in the same proportions, if not more, than gas," Jean Hatem said. "Many people can no longer afford to pay cash for a tank of gas and ask to pay in installments," he lamented.

A kiloliter of diesel for $601

Fuel prices have been modified twice a week for some time by the Ministry of Energy, using an index that reflects the average price of oil or gas over a period of almost a month, the local exchange rate or the costs of distributors. "Tuesday's change generally takes into account fuel prices and the dollar/lira rate, while Friday's change only reflects changes in the second factor," Hatem said.

While they had been revised only once last week due to the holiday season, the prices were finally amended yesterday. According to the new rates, the price of 20 liters of 95 octane gasoline was increased by LL15,600, from LL335,800 to LL351,400, while the price of 98 octane, which is still almost impossible to find on the local market because it is more expensive, was raised in the same proportions to LL363,400. Both prices are around $12 at the market rate.

According to the APIC source, the actual dollar price that should be charged without subsidies should be $15.50. Taking into account yesterday's parallel market exchange rate, this would put the price of 20 liters of gasoline at over LL400,000. This price is thus mitigated by BDL's foreign exchange platform, which agrees to exchange at a rate of LL23,500 to the dollar lira amounts provided by importers to pay their suppliers, leaving them to obtain the remaining 15 percent on the market. While the 85/15 ratio replaced the 90/10 ratio in force at the beginning of December, BDL this week raised the exchange rate applicable under its platform from LL23,200 to LL23,500 to the US dollar.

The price of a 10kg household gas cylinder, which stood at LL298,600 last week, is now selling at LL319,300, an increase of LL20,700. The 20 liters diesel fuel is now selling for LL360,400 pounds, an increase of LL24,200. The ministry finally set the price per kiloliter of diesel used by private generators – whose rates are updated at the beginning of each month for the previous month's bills - at $601 plus LL325,000 in transportation costs.

This article was originally published in French in L'Orient-Le Jour

Driven by the continued depreciation of the national currency, whose rate on the parallel market reached a new record yesterday exceeding LL30,000 to the US dollar, and the upward trend in world fuel prices in recent weeks, the price of 20 liters of gasoline could quickly exceed the LL400,000 mark. This was stated yesterday by the spokesperson for the gas station owners’ syndicate, Georges...

Will the new “lollar” rate of LL8,000 to the greenback affect tuition fees at Lebanese universities?