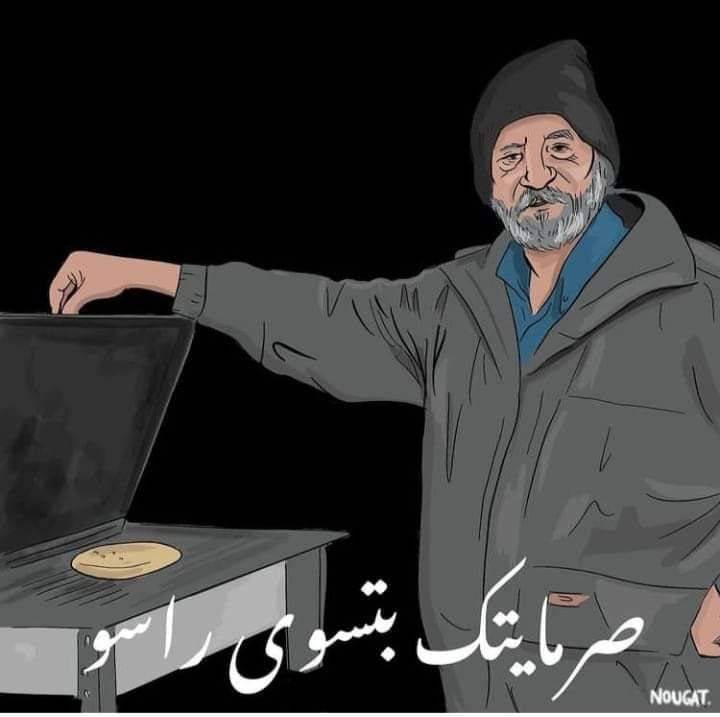 BEIRUT — After a food blogger described a struggling kaak vendor in Tripoli as “cheap” for the amount of cheese filling he put in the circular bread shell, social media leapt to his defense.

The vendor, Haitham Dannawi, has been working for 24 years on the streets of Tripoli selling kaak and is currently pricing one kaakeh roll at around LL6,000, or about 20 cents on the parallel market, amid the worst economic crisis Lebanon has seen.

He has to sell 18 kaak per day to cover cheese expenses alone, “keeping in mind that one kilo of cheese is sold for LL110,000 at supermarkets,” the Tripoli resident explained.

The vendor admitted to being upset about the comments of blogger Georges Dib, known as Dr. Food, who doesn’t know how “difficult my situation is, renting a cart and trying to make sales,” but noted that it didn’t impact his sales negatively. It kicked up a firestorm on social media, however, where posters called the food blogger’s post mean spirited and urged others to patronize Dannawi’s kaak stand.

Dr. Food went live on Instagram after the social media rage, saying he is “down-to-earth, otherwise [he] would not have eaten kaak from a disgusting looking vendor.” He then apologized for what he said, calling it a misunderstanding and wished Dannawi a good holiday.

The well-wishers’ campaign worked: Dannawi told L’Orient Today that whereas he used to make “LL150,000 on my best day, I’ve been making LL600-700,000 for the past couple of days” after the social media buzz that people had generated.

But this phenomenon is not the first of its kind. Residents of Lebanon have been using social media platforms to try and bring sales to small or informal businesses that would not reach as many audiences otherwise.

Around 13 months ago, Taha Abdallah tweeted from his humble personal twitter account that he is “over 50-years-old, did a baking course … and baking from home, thank God the profit is small and I don't have operation expenses.”

Abdallah said that, thanks to retweets from his friends, a community of supporters consisting of citizens and celebrities started sharing and supporting his posts.

Abdallah, who is based in Saida, confirmed that his sales increased “times 30” after the social media presence he got, and that he had clients order “from Beirut, Jbeil and other areas in Lebanon.”

A number of food bloggers from, or residing in, Lebanon have had considerable success exposing local businesses and vendors to a wider public and helping them increase their sales.

Anastasia Pahomovskaya, a Russian food blogger residing in Lebanon, introduced Feren Koko, a small shop that makes Brioche in Batroun, to her audiences “many times on my [Instagram] stories and many people visited it afterwards.”

She also tried a few “small local shops or small street food spots, especially in Tripoli”. Her “audience was happy to see me sharing those places and they went to try them as well.”

Anthony Rahayel, pan-Arab food blogger who is originally from Lebanon, started NoGarlicNoOnions specifically to introduce people to restaurants that are not available on the internet.

Unlike chain shops or bigger restaurants, small enterprises usually don’t offer free food, because they don’t know what bloggers can do for their business. Pahomovskaya, also known as Guidelb, thinks that shouldn’t stop bloggers from supporting small businesses.

Chihab Merhi, via his Twitter account @Xhihab, was one of the first to support Tripoli kaak vendor “Aam Haitham,” which translates to “uncle Haitham.” Merhi, who is originally from Koura, drove 25 km to meet Dannawi and take a photo of him.

At first Aaam Haitham was defensive and not willing to talk following his encounter with the blogger, Merhi told L’Orient Today. Since “Aam Haitham is not aware of social media platforms and only knows Facebook by name,” Merhi assured him that people across Lebanon are furiously asking for his whereabouts to support him.

“Besides that he [Haitham Dannawi] makes the most delicious Kaak, [the vendor] asked me to take an appointment with him so that I can work with him on starting a social media promotional campaign. His number is now with me for anyone who wants to communicate with him,” Merhi tweeted after the meeting.

However, Merhi couldn't find Aam Haitham without the help of one of his competitors who sells kaak in the same area in Tripoli.

“I do not want to forget this good guy ‘Abu Hassan,’ he is the one who helped me find out where Aam Haitham’s [Kaak] cart is,” he said.

In an effort to support Abu Hassan’s small business, Merhi tweeted: “If you pass by Tripoli, try Kaak from him.”

Lebanese actors and influencers have also had a role in supporting the kaak vendors. Actor Wissam Hanna for instance posted two photos saying, “this is Aam Haitham Dannawi, and young man Abu Hassan, the most honorable people in the beloved northern capital, Tripoli…” saying that he aims to visit them soon.

Jihad Smara, who learned about Amm Haitham through social media, tweeted: “I will buy from this oppressed man with $ 50. Show us his name and how we can connect with him.”

Similarly, activist Anthony El Haiby looked for help on twitter to “replace Aam Haitham's booth with a new one.”

“Any one of us can help small businesses get exposure. These people often can't afford internet access to advertise on their own and a simple picture or positive review can come in handy.”

Beirut City Guide tried to reach Aam Haitham, tweeting that they would “like to give him an opportunity to advertise his kaake on their platforms. People are trying to earn a living offering affordable street food during EXCRUCIATING times, you're not a big strong food blogger when you prey on them.”

For Rahayel, bloggers have a duty – not just a role – in shedding light on small-scale shops and helping them out. “Food bloggers should be the social media of people who don’t have social media,” he added.

BEIRUT — After a food blogger described a struggling kaak vendor in Tripoli as “cheap” for the amount of cheese filling he put in the circular bread shell, social media leapt to his defense.The vendor, Haitham Dannawi, has been working for 24 years on the streets of Tripoli selling kaak and is currently pricing one kaakeh roll at around LL6,000, or about 20 cents on the parallel market,...