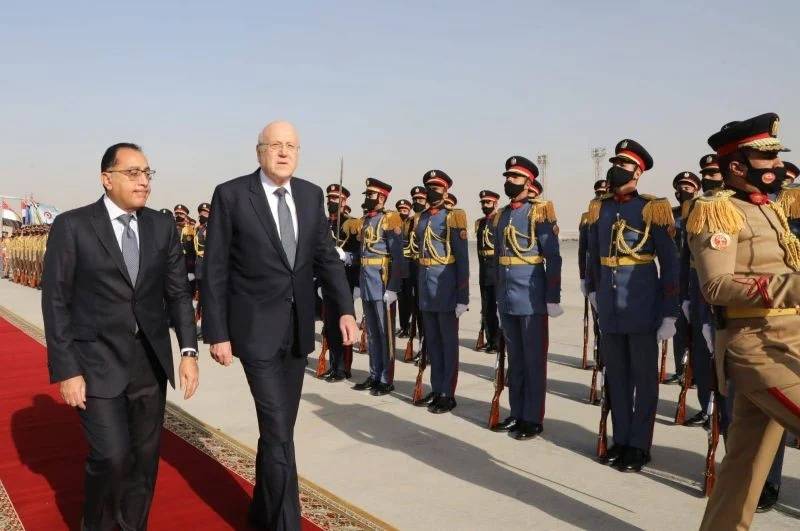 • The trip comes in the context of a serious diplomatic crisis between Beirut and several Gulf countries, led by Saudi Arabia. This dispute has worsened the internal political impasse in Lebanon. Mikati’s government has not met since Oct. 12 due to differences between its ministers over the investigation into the 2020 Beirut port explosion, with those cabinet members affiliated to the Amal Movement and Hezbollah insisting that probe head Judge Tarek Bitar be removed from the investigation on the grounds that his pursuit of certain MPs and former ministers is tantamount to “politicizing” the probe.

• Mikati arrived in Cairo shortly before 10 a.m. He was greeted at the airport by his Egyptian counterpart, Madbouli, the Lebanese premier’s press office reported.

• Egypt and the Arab League, of which Lebanon is a founding member, recently became involved in efforts to resolve Lebanon’s diplomatic spat with the Gulf monarchies, which was sparked by the broadcasting of controversial remarks made by then Information Minister George Kurdahi on Saudi Arabia's role in the war in Yemen. Kurdahi resigned from his ministerial post on Friday, more than a month after his comments were aired.

• The day after Kurdahi’s resignation, the Lebanese dossier was on the menu at a meeting between French President Emmanuel Macron and Saudi Crown Prince Mohammad bin Salman in Jeddah, Saudi Arabia. The strong man of the kingdom and the French head of state then had a brief telephone conversation with Mikati, perceived as a first step on the path to restoring relations between Lebanon and Saudi Arabia. However, a joint French-Saudi press release made clear that the warming of relations entails “the need to limit the possession of weapons to the legal institutions of the state” — a remark broadly interpreted to refer to the non-state arms held by Iran-backed Hezbollah. So far, the bin Salman-Macron meeting has not resulted in any significant development on the Lebanese scene. Saudi Arabia’s blanket ban on Lebanese imports, which was imposed in the wake of the airing of Kurdahi's comments, remains in place.

• Mikati’s trip to Cairo follows a recent trip that took him to the Vatican, where he met Pope Francis on Noc. 26. The pontiff showed himself in favor of a “common effort,” capable of pulling Lebanon out of the crisis it is going through.

BEIRUT — Prime Minister Najib Mikati arrived in Cairo on Thursday morning, where he is expected to meet senior Egyptian officials, including President Abdel Fattah al-Sisi and Prime Minister Moustapha Madbouli. He is also expected to meet with the secretary-general of the Arab League, Ahmad Aboul Gheit. Here’s what we know:     • The trip comes in the context of a serious...

Lebanon has registered 70 COVID-19 cases in the past 24 hours. Two people have died, raising the death toll...

Saudi Arabia's foreign minister: Elections 'may be a positive step, but it’s too early to tell'

More than 45,000 households have so far received assistance under the ESSN program: Social Affairs Ministry